DAs Have This Blueprint for Rethinking Criminal Justice – Next City

DAs Have This Blueprint for Rethinking Criminal Justice 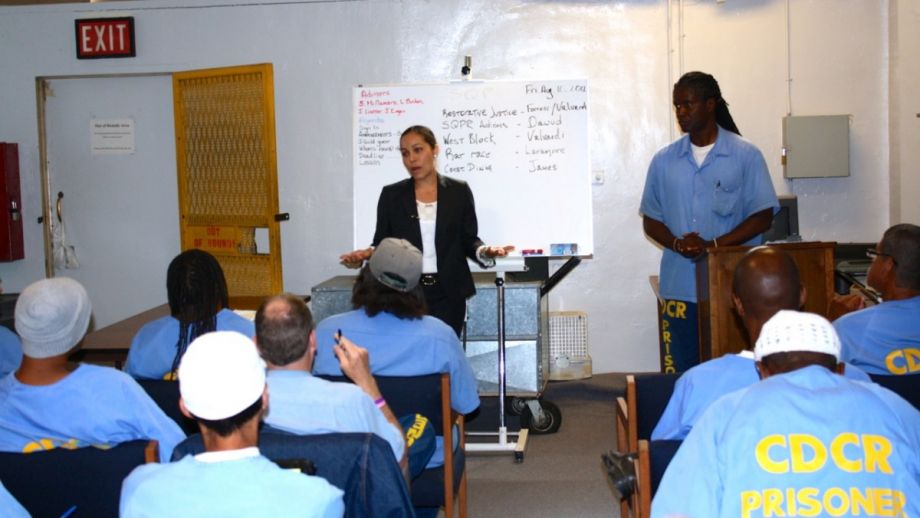 Marisa Rodriguez says during her first visit to San Quentin State Prison, above, she “realized this group of men was a potential 'think tank' for criminal justice reform.”

A powerful art exhibit, “Future IDs,” debuted in February on Alcatraz Island, the onetime prison in the San Francisco Bay. The work on display, larger-than-life identification cards, was created by and with people who have conviction histories in the criminal justice system. Each piece presents a vision of the artist’s self.

“It is probably the most important thing I’ve ever done in my life,” she says.

The board offers a blueprint to other DA offices in the United States for connecting people across the criminal justice system and generating policy alternatives that include the perspective of formerly incarcerated people. It had unlikely beginnings, according to Marisa Rodriguez, who recently left the S.F. DA’s office for a different job with the city. About seven years ago, her father, a former newspaper owner, was volunteering as an adviser to the inmate-produced San Quentin News. (San Quentin State Prison is about 20 miles from San Francisco.) He invited her to see the work of the newsroom and also the men’s work of rehabilitation. That visit resulted in a partnership between Rodriguez, who was an assistant district attorney before becoming the office’s director of community relations, and Arnulfo Garcia, then San Quentin News’ editor-in-chief. (Garcia died in 2017, two months after he was released.)

Garcia wanted to invite the public into the prison for a series of gatherings called San Quentin News Forum. He asked the DA’s office to participate. The events launched in 2012, when Gascón became the first district attorney to visit San Quentin.

“We just sat down and talked, about criminal justice reform, rehabilitation and re-entry,” says Juan Haines, senior editor for San Quentin News. “We’re talking about those who have been incarcerated and transformed and are no longer a danger to public safety or into criminal thinking.”

Most people charged and imprisoned by district attorneys will return to their communities. In California, after the Supreme Court ruled in 2011 that conditions in the state’s overcrowded penitentiaries was unconstitutional, lawmakers and voters enacted a series of measures to reduce sentences.

Rodriguez and Gascón had a few early goals in forming an advisory board with community leaders inside and outside of prison. One was simply to start a conversation between the office and people it sentenced. The other was to help create clearer pathways for those formerly incarcerated to rejoin the workforce, and access housing, education and community organizations. Finally, establishing the board was part of Gascón’s larger effort to address overincarceration in the city.

The concept wasn’t an easy sell.

“I felt like, I don’t want to work with no DA,” says Vandrick Towns, who is now a member of the board. “In being a former lifer myself [serving 25 years on a 22-to-life sentence], every interaction I ever had with the district attorney, up until the point I was paroled, was negative.”

Towns was released in 2013 with two college degrees and certifications in alcohol and drug counseling. He currently manages a treatment and re-entry program for other former lifers.

His conversation with the district attorney post prison was markedly different than any prior. “This was about — what did it take for you to learn about emotional regulations?” he says. “How did you deal with the trauma that led you to prison? With them actually asking those questions, it was very different than any interaction I’ve had with DAs or police.”

Ultimately 15 formerly incarcerated people, representing a diversity of race, economic status and experience with the criminal justice system, joined the board. They meet quarterly to offer their perspective on the DA’s work. They share their re-entry achievements and challenges too.

Towns has seen the work of the board translate to a more nuanced perspective of crime from the DA’s office. He says the board’s in-depth talk about issues like mental health and substance abuse have resulted in more treatment referrals and diversion programs from the district attorney.

The board also facilitates collaboration between the DA and outside organizations that address factors that contribute to crime, like homelessness or juvenile delinquency, as well as re-entry services. “Getting [the advisers] to chime in about how we can help collaborate with service providers to help the transition be smoother has been key,” Rodriguez says.

One early member became a sentencing planner who helped attorneys craft dispositions for more successful re-entry outcomes when prison was the only option.

The advisory board and DA’s office reps continue to visit San Quentin to keep up the conversation with those incarcerated. A recent visit to get ideas for the year will result in a forum including representatives from the San Francisco Police Department. (Alongside its work with the DA’s office, Haines says San Quentin Forums have also facilitated conversations between inmates and judges, law enforcement and educators.)

A report by the district attorney’s office in 2018 encouraged others to start similar boards. The office has invited DAs from around the country to the forums in San Quentin. “Prosecution is sort of risk averse. People don’t want to take risks, because we’re about public safety ultimately,” Rodriguez says.

But she believes bringing the formerly incarcerated perspective into the office has made a profound difference, and she has worked to expand the board’s role. (Gascón is not seeking re-election in November, and it’s uncertain if the next DA will continue the board.) The board is in the process of developing a mentor program with the young adult court; a future goal is to establish forums inside women’s prisons.

The DA’s office also tapped a former board member to help establish a victim’s board. Rodriguez sees the two boards working together, in a dialogue that reflects restorative justice values.

Both Reid and Towns value the feeling that their voices matter and see their work on the board as one way they can give back and make amends.

“I was a taker most of my life,” Reid says. “To have the opportunity to be a giver, it’s allowed me grow in a way I never thought I would. And it just keeps growing, something keeps coming from it, and everything stems from that.”

Editor’s Note: This article was corrected to reflect that Arnulfo Garcia was released after serving his prison sentence.