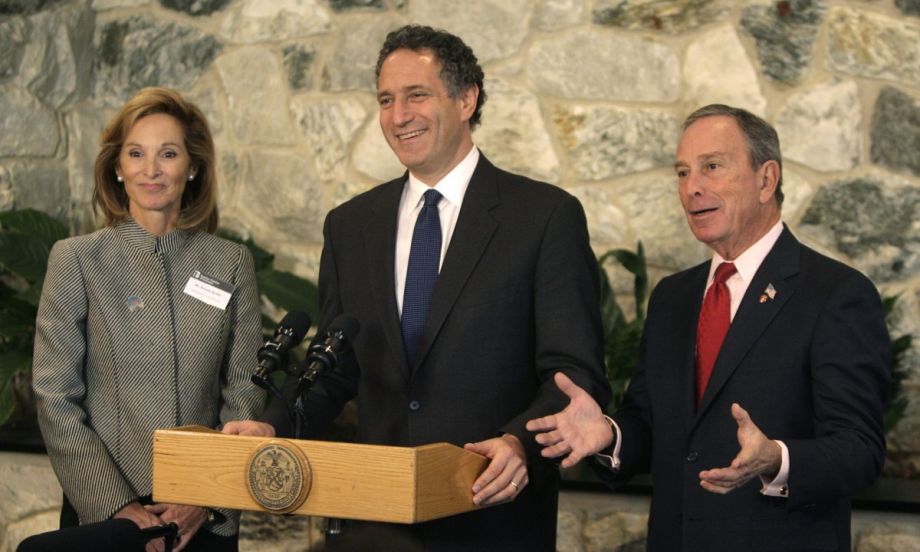 For Dan Doctoroff, civic engagement in New York City began in the early 1990s, when he decided that the key to spurring investment and improving quality of life in the city was hosting the Olympics. Then a managing partner at a private equity investment firm, he championed an Olympic bid (and the new infrastructure it would require) obsessively. The effort raised his profile among city leaders and, when Mike Bloomberg was elected mayor in the wake of 9/11, Doctoroff was tapped to be deputy mayor of economic development and rebuilding.

Now CEO of Sidewalk Labs, a Google-connected company that’s exploring ways technology can help cities, Doctoroff has a new book out, “Greater Than Ever: New York’s Big Comeback.” It chronicles his time as deputy mayor and offers an inside-city-hall look at what it took to revive lower Manhattan after the 9/11 attacks, grow and diversify the city’s economy, spur major projects such as Hudson Yards and the High Line, increase affordable housing investment, and more.

I spoke to Doctoroff about his time as deputy mayor and his new role at Sidewalk Labs. He shared his thoughts on the need for economic success and the difficulty of balancing that success with keeping cities affordable to all, the good and bad of gentrification, how the quest for the Olympics helped reshape New York, how technology will impact city planning and policy, and much more.

Looking at New York now, it’s easy to forget how far it’s come since Bloomberg took office. Of all the changes that took place over the last decade and a half, name the one that you’d say you least expected.
I think nobody expected the recovery to be as robust as it turned out to be. I generally don’t like that word, but I think it applies well here. We made massive investments in the future at the very moment the city was facing the depths of its crisis, both financial and emotional, because we believed in the future. We believed if we made smart investments people would want to come and that the natural competitive strengths of New York would be very powerful given where we saw some of the global economy moving.

I will say we didn’t expect it to occur that quickly. Overall that’s a great thing. But we probably didn’t react as quickly as we needed to as the years of the Bloomberg administration wore on because we didn’t anticipate that growth. Still I wouldn’t trade it for the alternative.

The Bloomberg administration invested billions of dollars to preserve or build 165,000 affordable housing units. Mayor Bill de Blasio is working to add or preserve 200,000 more. Yet there’s still more demand for affordable housing than supply. Do you think a popular, prosperous city can ever be affordable to people of all income levels?
I do. I think it gets harder and harder, which means you have to spend more money and you have to create more available land to do it. Part of the problem with affordable housing is land costs in highly desirable places are too high. There’s only one really good answer to that: Make more of it available. But you also then need money because affordable housing is really just subsidized housing.

If you highly value diversity in communities, which we certainly did, then the only answer is spending more money. The only way to spend that money is to make it. That’s why we felt the kinds of investments we made were so critical. It’s why the [city] budget going from $42 billion to $70 billion is so important. It is possible to have a meaningful impact, but you’ve got to have both land and money and you’ve got to be creative in the way you do both.

What will Donald Trump’s presidency mean for urban policy?
I don’t think we really know at this point. We haven’t seen much of anything out of the federal government about urban policy. Some of his rhetoric in the campaign was about lifting up communities. Yet we haven’t seen really any activity to demonstrate that’s the case. I don’t think we can be optimistic about that at all. On the other hand, I think he understands cities. He understands what makes them work. I thought in my time as deputy mayor, he was a good ally of ours. I know he believed in the approach we took. But I haven’t seen a whole lot of evidence to support a view that [Trump is] going to be particularly helpful. Maybe when we actually see an infrastructure bill, that’ll give us a hint. But thus far there’s no evidence.

What do you think is missing from the conversation about gentrification in U.S. cities?
Gentrification and affordability aren’t always the exact same thing. We often don’t talk about the benefit of gentrification. There isn’t a lot of analysis of what those impacts really are. Who benefits, who loses? Here in New York there have been studies done on affordability of housing, but we don’t really even have any information about whether people were forced to move out as a result of neighborhoods gentrifying. Some of the studies I cited in the book couldn’t find any evidence. But that doesn’t mean that there wasn’t. We do know affordability got worse in New York and presumably other successful cities. But we don’t know who benefited from that.

I was amazed how many prominent projects, like the Seventh Avenue Subway extension, Hudson Yards, the High Line, were either directly or tangentially conceived of or built as part of the Olympics bid. How different would the city look if the bid wasn’t underpinning so much of your personal mission?
It wasn’t just my personal mission. As we developed the bid, the whole notion of the Olympics as a catalyst for getting things done was critical to our thinking. As we developed the plans, it wasn’t just me spitting off on my own. Our small team of planners incorporated leading thinkers about the city, some officials in the [Mayor Rudy] Giuliani administration, to really think through some of these problems and opportunities. When we came into office, we really had, through the Olympic plan, an agenda for the city’s physical future.

Because we wanted to get plans approved before the International Olympic Committee voted, the bidding process was critical to the speed at which we were able to accomplish things. A lot of what we did was directly traceable back to that bid. That was the whole reason we started it. It was the insight that having deadlines that the Olympic bidding and hopefully hosting the Olympics can be a catalyst for getting things done.

In the book, you write differing priorities — of mayors, city councils, neighborhood groups, etc. — can cause planning gridlock. Thinking about your current role with Sidewalk Labs, how can technology smooth that path?
I think the most important thing technology can do in terms of the planning of cities is give people better information about the impact of decisions. Some of what we’re working on is to develop those tools. I think the more important thing is that technology is going to give us the capacity, through sharing and other things, to better use the things we have. We’re not going to be building lots of new roads or subways. We’re going to have to find ways to use what we have more efficiently. That is going to be a major impact of technology if we get it right.

Beyond that, I think it can make cities more adaptable and give people a greater sense of accountability. For example, we can look at the pollution or emissions we create. Being able to actually track who does what and being able to charge for it is going to have a significant impact. We tried to do congestion pricing in New York. It was one of our big failures. It was defeated in Albany by the state legislature. It’s now coming back as the transportation issues become greater here. Part of the reason congestion pricing is coming back is the technology is actually easier, but also the need is greater. This notion of accountability is really important.

We’re really bullish on what I call the fourth urban technology revolution, which we think we’re just embarking on now. I believe — without being Pollyannaish about it; none of this is easy — that it can help address many of the urban problems we have.

What do you say to people who are afraid that sensor-filled, wired-up cities are the path to 1984?
I think those concerns are legitimate. It doesn’t mean we shouldn’t learn and find the right solutions to gaining the benefits of these technologies and protecting people’s privacy and ensuring data security. The technologies are already here or they’re coming. We see that every day. The question is what are we going to do to maximize their benefit without undermining people’s liberties. We’re going to have to work to find what those right solutions actually are. The answer is not to put our heads in the sand and say we don’t want any of these technologies. The answer is to have serious conversations and try to develop real policy about how we want those technologies to be used.

This interview was edited for length and clarity.