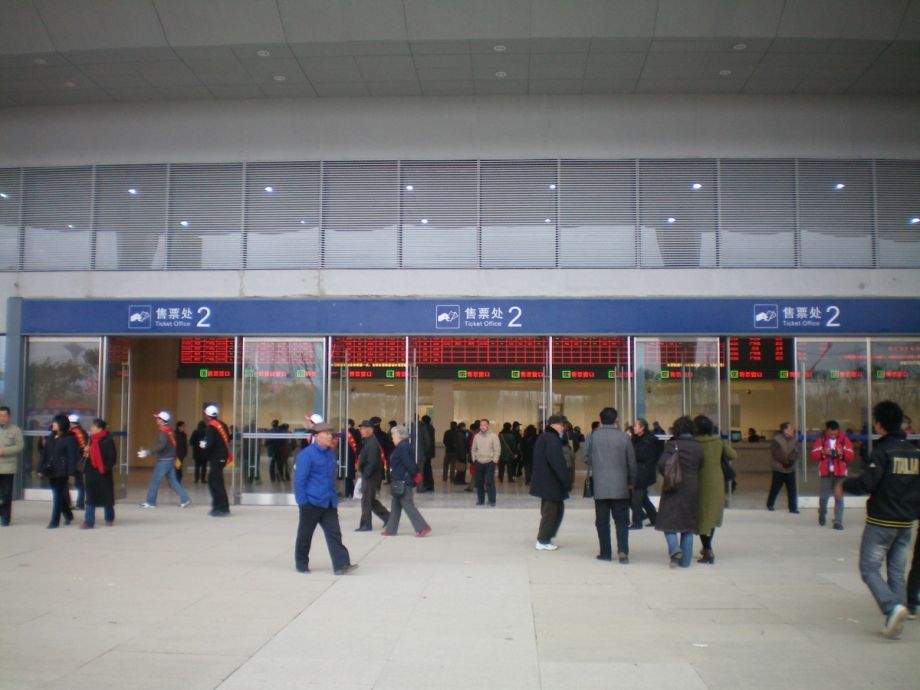 China plans to expand the number of lines to Wuhan railway station, above. (Photo by Zhangmoon618)

Our weekly summary of new and newsworthy transportation projects worldwide.

Dallas-Houston HSR a Certainty, Texas Officials Say
The Fort Worth Star-Telegram reports that officials who testified at an Aug. 27th meeting of the Commission for High-Speed Rail in Dallas/Fort Worth all agreed that an idea that seemed a fantasy when first proposed could become reality — namely, a high-speed train connecting Dallas and Houston. (For all the details on the project, read Next City’s recent Forefront article, “The Bullet Train That Could Change Everything.”)

One of those who testified lends extra credence to the report: Texas Transportation Commission Chairman Ted Houghton said that service could commence in as little as seven years from now.

“The Houston-to-Dallas connection is going to happen,” Houghton told the Star-Telegram. “It will have one stop, in College Station.”

This confirmation should please more than just Dallasites, Houstonians and Aggies, for it, along with the Dallas-Fort Worth connection the commission proposes, serves as the base for possible future extensions along the I-35 corridor northward to Oklahoma City and southward to Austin and Mexico.

Work on Mombasa-Nairobi Rail Link to Commence in October
Sometimes, it doesn’t require a super-fast train to revolutionize transportation. In some instances, especially in the developing world, just a faster one will do.

Case in point: the 483-km (300-mile) journey between the Kenyan capital of Nairobi and its principal port city, Mombasa. Currently, it takes passengers 15 hours to complete this trip on a decrepit narrow-gauge railroad completed in 1901 by Britain’s colonial government. Freight takes even longer to get from port to capital — up to 36 hours.

A new Chinese-built rail line will put an end to all that. According to the Global Post, work is set to begin in October on the line, whose route will be longer than the railway it replaces — 609.3 km (378.6 miles) — but whose speed will be significantly faster; it is designed to allow passenger trains to operate at 120 km/h (75 mph) and freight trains at 80 km/h (50 mph).

At these speeds, the travel time for passengers between the two cities will be slashed by more than two-thirds, to 4.5 hours. Freight trains will see a trip time improvement of more than 80 percent as they will complete the journey in just eight hours.

The China Exim Bank is picking up 90 percent of the cost of the standard-gauge rail link’s construction, a figure CNN pegged earlier this year at $5.2 billion. The government of Kenya will cover the remaining 10 percent. The line is the first phase of a longer rail link that will ultimately replace the entire narrow-gauge railway, much of which is dilapidated, connecting Mombasa with Uganda’s capital city, Kampala. State-owned China Road and Bridge Corporation is building the line.

Chinese Cities Fast-Track Metro Expansion
And speaking of China, two of that country’s newer metro networks are being put on a fast track to rapid expansion.

Under the expansion plans, Wuhan’s system would grow from its current extent of 79.1 km (49.2 miles) to a total of 385 km (239.2 miles), including lines currently under construction as part of the system’s second phase of expansion. Nanjing’s current three-line, 98.45-km (61.17-mile) system would grow to a total of 215.7 km (134 miles) when all work is complete. Nanjing’s expansion plans also include new suburban rail lines that had originally been part of the city’s master metro plan.

Wuhan became the fifth city in China to have a metro system when its first line went into service in 2004. Service started in Nanjing the following year; its system is currently the fourth-most-extensive in China.

Know of a project you think should be featured in New Starts? Send a Tweet to @MarketStEl using the hashtag #newstarts.