D.C. May Join List of Cities Increasing Representation in Public Art – Next City 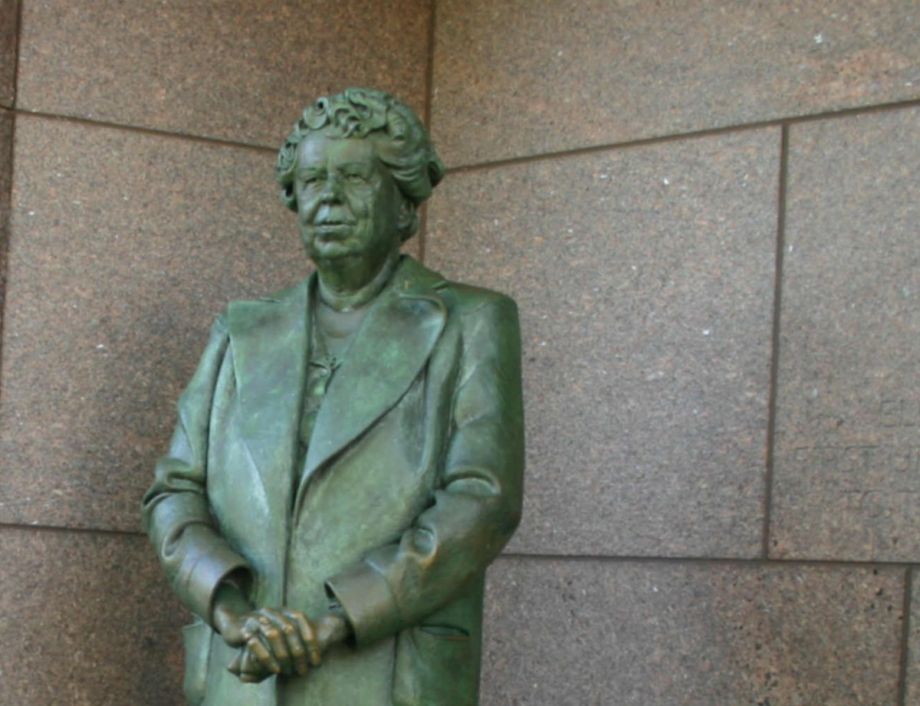 The Eleanor Roosevelt statue on the National Mall is one of the few statues in D.C. depicting real-life women. (Photo by Elvert Barnes / CC-BY 2.0)

“Why do we have monuments of people who owned slaves?”

That’s the question that D.C. Councilmember Kenyan McDuffie’s six-year-old daughter asked him and his wife one day while driving from D.C. into Virginia.

A glance in nearly any direction in D.C. will likely offer views of statues and monuments of — alongside museums filled with history about — white men (a good majority of whom owned slaves) and the near-complete neglect of the representation of the array of women and people of color who have very much made D.C. what it is today.

Of the one hundred or so statues across the city, only about a half dozen are of women and just nine are of people of color.

If a bill McDuffie recently introduced bill passes, D.C. will join cities like New York and San Francisco that have sought to diversify the gender and racial representation in their statues.

“If you’re a woman or a person of color walking around the city, you’d be hard-pressed to find a statue that looked like you,” says McDuffie of the reason for the bill. “There are a lot of beautiful monuments and museums, but they don’t reflect the beautiful diversity of our city.”

If successful, the bill would create space for and fund the construction of eight new statues. The subjects of four of them are proposed in the bill: Dr. Charles Drew, a researcher who developed methods for storing blood; the city’s first licensed female architect, Rose Greely; playwright Mary P. Burrill; and the five Shaed sisters who were instrumental in creating the D.C. public school system.

“We got input from people across the community and we got input from students and from community organizations and the DC Preservation League and others who are interested in trying to contribute,” McDuffie says of the process of identifying the subjects of the first four statues.

The other four statues would be determined by a committee whose creation the bill also calls for. An advisory group called the Commemorative Works Committee would be responsible for recommending subjects for the final four statues through community and expert input.

In addition to the surprising conversation he had with his daughters, McDuffie has also been inspired by similar progress happening in other cities. “I’ve been sort of watching what other cities have done. We’ve seen where other cities have moved in this direction of erecting more diverse statues and cities that have decided to take down statues that aren’t consistent with the values of the residents who live there today,” he says.

In late 2018, San Francisco passed an ordinance requiring that at least 30 percent of new artworks installed on the city’s streets depict real women in order to begin to reverse the imbalance between the city’s 84 historic statues of men and just three of real-life women. Work in San Francisco will begin with a bust of Maya Angelou, who moved to the city as a teenager. At a cost of roughly $400,000, the piece is slated to be installed in front of the city’s Main Library in 2020, according to ArtNet.

Last month, New York City, too, announced that it would install statues of four women. Representations of Billie Holiday, Helen Rodríguez Trías, Elizabeth Jennings Graham, and Kathleen Walker — a famous jazz singer, a champion of public health, a teacher who worked to desegregate public transportation, and a lighthouse keeper who saved dozens of lives, respectively — will be installed in various boroughs, resulting in at least one statue of a woman in every borough, reports the New York Times.

On the heels of changes like these throughout the country, McDuffie has high hopes for his bill this time around — thanks in part to other recent efforts to diversify the city’s statuary art — after a similar one failed in 2017.

Last year the city’s Mayor Muriel Bowser established a committee charged with erecting a statue of Charles Hamilton Houston. The former dean of Howard University, Houston was a D.C. native who was instrumental in both abolishing Jim Crow laws and contributing to the historic Brown v. the Board of Education decision.

“I’m really encouraged about it passing. I have support among colleagues and residents across the community,” McDuffie explains. “I think there’s a lot more interest across D.C. and similar efforts in other jurisdictions that have contributed to the momentum seen here in our nation’s capital.”

While the efforts to bring equity in representation to public art is all inarguably moving in the right direction, there’s more work to be done. As Natasha Frost pointed out in Quartz in response to San Francisco’s ordinance, the next step is to begin to think about women and people of color not only as the subjects of public art, but as the creators as well.

“[T]his legislation will do little to help a related issue. Of 358 public artworks in San Francisco listed in the Smithsonian’s online catalog, just 15 percent were by female artists,” Frost wrote. “If Stefani,” the sponsor of the bill, “and the other representatives on the board of supervisors are interested in recognizing the accomplishments of great women, they may want to consider what they can do to help facilitate more of them — including setting goals to feature more art by women.”