Help Us With Our #ChangingCity Project – Next City

Help Us With Our #ChangingCity Project 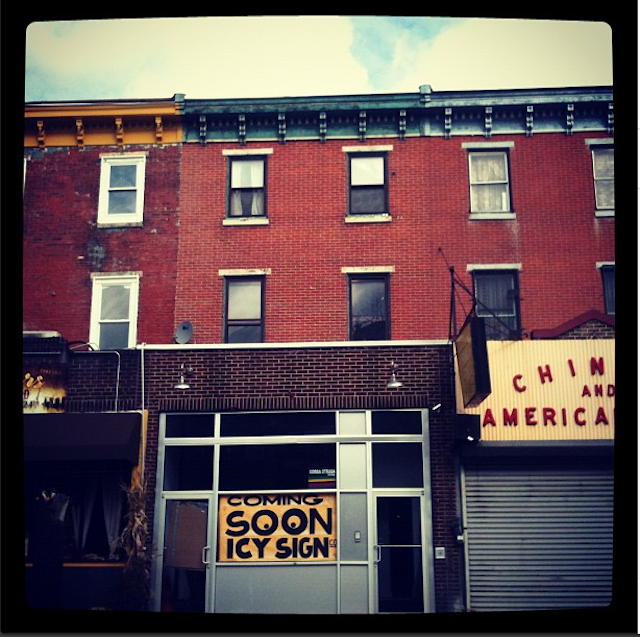 I took the photo the top of this post a little more than two years ago on the North Philadelphia block that was then home to Next City’s storefront office. The photo captures a specific moment in the transition of the 2800 block of West Girard Avenue. An unassuming street where bodegas and beauty supply stores mixed with vacant storefronts and a few beloved local destinations, including a fantastic hat shop specializing in church-appropriate millinery and the deliciously calorific Butters Soul Food To Go, the block was in the process of being rebranded as the commercial spine for the up-and-coming neighborhood of Brewerytown.

Today, the neighborhood’s transformation is well underway. Icy Sign is gone. Butters and the hat shop remain, along with several higher-end establishments that have opened elsewhere on the block, catering to residents of apartments recently renovated with shining wood floors and stainless steel appliances. A place that serves fresh sandwiches and good beer occupies a long-vacant toy store that briefly served as Next City’s office. On the 2700 block of West Girard, a microbrewery squeezes into the narrow storefront where we even more briefly worked. A sleek, 16-unit apartment development is under construction on the next block. I need to go back and take another picture.

As we close another year of near-obsessive reporting on the cultural, social and economic trends reshaping cities, it seems like a good time to reflect on all we’ve seen. This week, we are asking you, our readers, to send us images like the one I’ve shared in this post. In conjunction with this week’s feature story about the changing economic and cultural tides in the city of Oakland, Calif., and our 50-year gentrification timeline, we want to see what these phenomena look like to you.

You can send a picture of a transitioning block you travel often, or a photo of a project that epitomizes everything going right — or wrong— in your city. You can send an image that telegraphs progress or one that symbolizes a problem you see. It can be a picture of a shifting urban fabric that comes with no judgement.

We want to push the conversation beyond annoying cliches and simplistic, polarizing binaries. Neither help us find solutions for the very real challenges that come with change.

When Next City was on West Girard, we were part of a process of gentrification: college-educated professionals — most of us white— silently tapping away on Mac computers in our open-floorplan storefront while homeless men attempted to bum cigarettes on the corner and mothers — most of them black— hurried past to drop their children off at the daycare center on the next block. People would peer in the glass window of our storefront, their confusion about what we were doing in the neighborhood visible. Local media held us up a sign of the neighborhood’s ongoing transformation.

We were because the rent was low. The cost was an office that was badly in need of repair. At one point, a leak in our ceiling had fetid water falling like rain on our computers. Near the end of our tenure there, the couple living in the apartment above us were robbed while we were working in the office below. (We thought we heard the sounds of someone breaking something, but who could be sure?) Many of us on staff felt uncomfortable about our role in the neighborhood’s rebranding. Ultimately, we did not renew the lease.

I still miss the relationships I had with our neighbors on West Girard. In an area where many residents and businesses have been for decades, there is a certain warmth and familiarity that extends even to the newbies like me. In our year and a half on the street, we did a few projects with neighborhood kids who would then occasionally peek in to say hi. Though I can’t hear the music being played in the law office next door to our new Center City digs, I am quite positive it wouldn’t beat the daily soundtrack we had for our final months on W. Girard, thanks to our location next to Music Box Records, a 19-year-old shop specializing in R&B, gospel and soul. I credit Music Box owner Jim Davis for unintentionally teaching me that Jackson 5 on a loop could actually work quite well as background music for my editing.

These stories of small connections and intimate geographies shouldn’t get lost in policy debate or ideological arguments. Our hope is to start a conversation that can help us better understand the communities we cover and the myriad perspectives our readers bring.

We will publish the most compelling photos on NextCity.Org. Send a caption with your picture that explains what’s going on and we will select the most interesting story to be reported by one of writers in an upcoming feature.

There are three easy ways for you to submit a photo and/or story about your changing city. Please make sure to include the location of your photo.