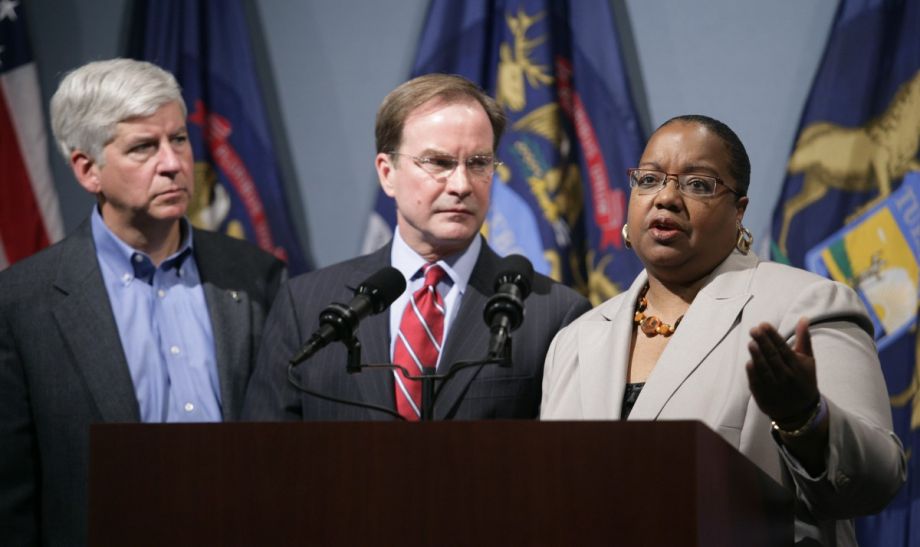 Detroit has an astonishing idea for how to solve the crisis of its backlog of untested rape kits: raising $10 million through charitable donations. This first-of-its-kind strategy is led by tenacious Wayne County Prosecutor Kym Worthy, herself a survivor of rape, and it is an historic effort to motivate individuals to fill a yawning public sector gap.

The campaign struck a chord: It raised more than $900,000 from all 50 states and a number of foreign countries in its first month. That total continues to climb. Sheryl Sandberg’s foundation sent an unsolicited $25,000 check. Actress Mariska Hargitay of Law & Order: SVU backed the project through her Joyful Heart Foundation, and stood beside Worthy in recent press conferences. Comerica Bank, DTE Energy and the MGM Grand Casino Hotel signed on. Even small local groups like book groups and a canasta club are taking action.

Worthy also says that her office is in the “very, very beginning stages” of partnering with UPS. Detroit will be a pilot site for a program that will track rape kits the way that the big shipping company tracks packages, following them from the hospital to the lab to prosecution. “It’s in the initial stages, but we hope it will be a success nationally,” Worthy says.

When 11,341 untested rape kits were found moldering and forgotten in a Detroit storage unit in 2009, it was one of the worst instances of an unsettling national phenomenon. Some of the kits — which include evidence that’s collected from victims during an examination process that last four to six hours — dated back to the 1980s. Meanwhile, Houston faced about 16,000 untested rape kits. Los Angeles had 12,669 on its hands, and Las Vegas, more than 4,000. Nationwide, the known rape kit backlog totals about 400,000. In each case, city funding and priorities deemed sexual assault crimes unimportant, leaving serial rapists free to strike again.

Solving the problem looked hopeless. Where was the money going to come from to test, process and investigate all those kits — and avoid another such backlog in the future?

Houston was the first to solve its rape kit problem, through a combination of collaborative strategy and federal support. Some of those same tactics are at play in Detroit, including support from the National Institute for Justice. To date, with 2,000 of those kits tested so far, 188 serial rapists have been identified. Some committed crimes in 27 other states and the District of Columbia, meaning that this is a problem that doesn’t end on the state line. Fifteen offenders have been convicted so far, including one who both raped and murdered seven women. Every one of those assaults and murders happened after a rape kit that would have identified him was placed in the storage unit — but it sat untested for years.

In another disturbing case, an offender took on the guise of an undercover police officer when he offered a deaf woman a ride home from a bus stop. He raped her, and the woman went to the hospital where a rape kit was collected. But it sat on the shelf, untested, for six years. When it finally was examined, the offender was linked to three other rapes.

Thanks to a $4 million earmark from the state of Michigan, all of the rape kits are expected to be tested by May. But money is still needed to investigate and prosecute the perpetrators — to actually solve the long-lingering crimes. The state attorney general has contributed $3 million over the next three years for this purpose, and the Detroit Crime Commission intends to fund a cold case unit that will target unsolved rape cases, with the help of grants. The commission also found a way to reduce the testing cost from $1,500 per kit to $490.

But that’s still nowhere near enough to track down thousands of offenders, each of whom, on average, will rape 11 times. Most of these cases are years old, and the victims whose rape kits were mishandled may be disillusioned with the police process. The Crime Commission estimates that it would take $2 million per year for five years to work through all existing cases — and more sexual assaults are committed every day. The prosecutor’s office is in need of funds to hire additional investigators and lawyers for the sexual assault cases, as well as a new content management system to track them all.

That’s why Kym Worthy’s office has partnered with nonprofit agencies to spearhead an ambitious fundraising campaign called Enough SAID (Sexual Assault in Detroit). With support from the Hudson-Webber Foundation and other private philanthropists, the Michigan Women’s Foundation has a three-year contract to take the lead. It boosted its staff from four to 14 to steer Enough SAID as it leverages donations to identify and investigate offenders, and to exonerate the innocent.

Peg Tallet, chief community engagement officer of the Michigan Women’s Foundation, says that usually when a fundraising campaign is begun, there is a pre-existing base of supporters — members of a museum, for example, or longtime advocates against homelessness. But the rape kit campaign “literally started from ground zero,” she says. “Most people weren’t aware of [the problem]. We had to create a constituency of caring people.”

To do that, the team emphasizes the enormous benefits to public safety, health and psychology when sexual assaults are taken seriously. They are also connecting the dots between testing rape kits and economic development: “Getting these people off the streets strengthens the community revitalization work in Detroit,” Tallet says. Worthy echoes this: “Public safety is first on someone’s list. They’re not going to come here or bring their business if they don’t feel safe.”

With such a heartening early response to fundraising, Tallet has found that “the people of southeast Michigan are very philanthropic.” And the unusual opportunity to contribute to a cause that does not just have an impact on a civic problem, but actually can solve it — that resonates with people.

Human empathy also resonates. “Everybody has a mother, sister, aunt, friend, partner or wife,” Worthy says. “Anyone can be raped at any given time. If people think it can only happen to certain people or in certain places, they have their head in the sand. Even if it doesn’t happen on your watch, you want to fix it. We want to have a safe southeast Michigan.”

Crucial other measures are coming together. Republican Governor Rick Snyder signed a law that mandates faster and more thorough testing of rape kits, setting a timeline for each step of processing them. The Detroit Police Department assigned six police officers to focus on rape kit investigations. The Obama Administration has called for more federal support to local governments to combat sexual assault, and Congress has earmarked $41 million for the problem.

Private donations are not a replacement for public support, Tallet says. Charitable contributions from individuals and companies have combined with past and future public funding to put $10 million toward the rape kit crisis to date. That boils down to $2.6 million in federal funding, $7 million in state funding, and $650,000 in city funding, in the form of the newly tasked investigators. Nearly $1 million has come through so far in private donations, and about $9 million more is sought.

If a city that has just emerged from bankruptcy and emergency management can take such profound steps forward in solving its rape kit crisis, other communities have little excuse for letting the problem fester on their own books.

“You’d be hard pressed to find a city with financial problems as serious as Detroit has,” Worthy says. “That has meant a lot of work for us, a lot of thinking out of the box, begging everyone we think can help, finding a lot of support from the federal government. It wasn’t right away, but support did also eventually come from the state and attorney general and legislature.

“It takes a lot of stick-to-it-iveness, a lot of explaining and educating that this is not a Detroit-only problem, or a Michigan problem. It’s a national problem. If it has happened to your community, the last thing you should ever do is nothing.”

Worthy fought to bring urgency to this issue for more than five years. It is a testament to her rare commitment that she wasn’t bowed when her early advocacy was met with loud silence. “We certainly did not have a funding source (to address this),” she says. “We did not have buy-in from my local funding authority” — that is, Wayne County. But the longtime county executive lost his re-election bid in November, and the new executive is a former sheriff whose leadership, Worthy says, recognizes the importance of the rape kit problem and supports her work in resolving it.

Too many people, Worthy says, relied on the system and were let down. For those in the community whose rape kits sat forgotten on the shelf and who have lost faith in the public process, Tallet emphasizes that “crimes against women cannot be ignored. We need to act, and across the country, people need to be a voice for this in their own communities.”