A Critical Mass Tragedy Sparks a Bicycle Boom in Brazil 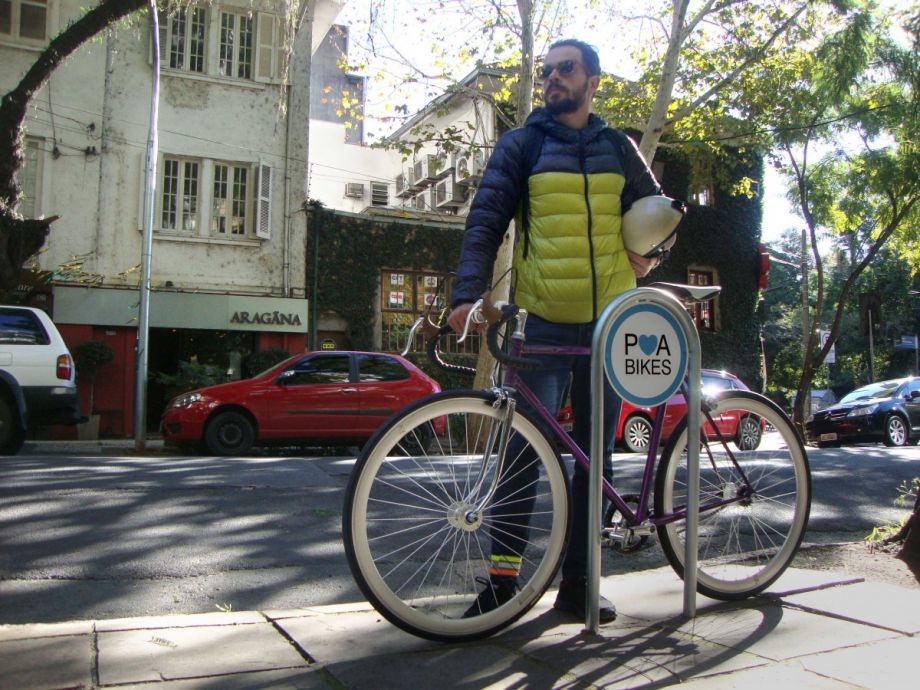 Like bike riders the world over, cyclists in Porto Alegre know that the last Friday of every month is Critical Mass. But in February 2011, the rolling circus protesting for the right to ride in peace turned tragic when an irate driver crashed into the crowd. Thirty people were injured, many severely, in an event that shook the cycling community to its core.

Lívia Araújo, a journalist, was riding with the group, but escaped unscathed. “I thought I would stop riding because of the shock. We thought everyone would give up, especially people just learning to ride,” she says. Instead, the opposite happened. At a solidarity Critical Mass ride four days later, nearly 2,000 people showed up in support. “So many that I had to walk my bike,” she recalls. “It was a defining event because it forced people to confront the fact that our traffic is really violent. Over 40,000 Brazilians die on the roads every year.” Indeed, the headline-grabbing incident galvanized the local cycling community and city government alike, generating a vibrant bike culture and concrete steps toward a more bike-friendly Porto Alegre.

I met with Araújo inside Vulp Bici Café, a cozy spot she calls “an extension of my living room.” Tássia Furtado, who opened Vulp with two other women in their twenties and early thirties just over a year ago, explains the rationale. “We always met up to ride and then went to a bar to drink, trading tools and parts at a sidewalk table. But it gets cold here in the winter, so we needed a place indoors to drink and work on our bikes.”

With baristas slinging espresso drinks, cold beer in the fridge, vegan snacks at the ready, zine-style decorations and bike parts and gear for sale, it’s a haven for everyone who navigates the city on two wheels. On a recent Friday the crowd included tattooed bike messengers, middle-aged guys drinking beer and sweater-clad laptop users. Araújo’s own line of rain gear is on display, part of what she calls a “boom” in locally designed bike-wear as an alternative to pricey imports that was spurred by the first ever World Bicycle Forum in 2012, held one year after the Critical Mass crash.

The decision to channel the anniversary’s energy into something constructive like the Forum, which next year will travel to Medellín, was spurred in part by Marcelo Sgarbossa. Now a city councilman, at the time he was director of the Laboratory for Public Policy, an NGO he founded, and is a former professional cyclist who retired out of disgust with the sport’s doping culture. With one foot in the bike activist community and another in city hall, he was elected in October 2012 as a Workers Party candidate on a pro-bike platform.

Although there is a lack of formal research, Sgarbossa believes that the trend toward urban cycling was growing even before the tragedy of February 2011. BikePoA, a bike-share system launched in September 2012, now boasts 2,000 daily trips by its 104,000 registered users.

Sgarbossa attributes this trend to a reaction against surging car use in the city. “Porto Alegre has this revolutionary reputation as a city that questions the system. The bike is a symbol of an anti-car and anti-system attitude,” he explains from his office at the city council building, which is bedecked with campaign posters of a stylized cyclist in motion rather than the typically Brazilian smiling image of the candidate’s face. One of his staffers remarks with a laugh that his constituents don’t recognize him because his likeness has never been plastered all over the city.

From a policy side, the council approved the Integrated Bike Route Master Plan in 2009 with a provision for 495 kilometers (308 miles) of bike infrastructure. Sgarbossa’s criticism is twofold. First, the law approving the plan established no deadlines for its implementation, which means, according to him, “It hasn’t gotten off the ground because city government doesn’t have the courage.” He is cautiously optimistic about legislation his office is drafting to establish an eight-year deadline for full implementation.

Second, the law that spelled out the 2009 master plan also dedicated 20 percent of the city’s traffic fines as a funding source to build out the bike network, alongside a portion of real estate taxes on projects with lots of surface parking like malls and supermarkets. The traffic fines represent a princely sum: nearly R$30 ($13.5 USD) million annually, resulting in R$6 ($2.7 USD) million to benefit the cycling community. City hall complained in 2011, arguing that the legislature had no right to dictate the executive’s budget, and went to court. A judge determined that the fines are not part of the city’s budget and thus eligible for earmarking.

Emboldened, Sgarbossa successfully passed legislation in April to establish a municipal fund for the bike network overseen by a committee in order to ensure a more efficient use of resources. But the mayor’s coalition in council pulled some legislative jiu-jitsu and amended the law to retain the 20 percent of traffic fines, but pull an equivalent amount directly from the municipal budget rather than from the fines themselves. Thus, on paper, nothing changes, but in practice, the mayor’s annual budget, usually issued in November, will show whether or not the executive branch is holding to the spirit of the law.

Antonio Vigna, mobility projects manager at the Public Company for Transportation and Circulation (EPTC), is the closest thing Porto Alegre’s city government has to a bike coordinator. He professes to positive relations with Sgarbossa and acknowledges the funding issue agnostically. “It’s the same amount, it just comes from a different source. Now it’s the mayor’s responsibility to liberate the funds. The president of the EPTC has no way to demand it. We keep building bike lanes in any event,” he says.

The funding imbroglio notwithstanding, Vigna asserts that the availability of resources are not the main reason for the slow pace – the city currently has only 24 kilometers (15 miles) of bike infrastructure, the vast majority of it downtown even though Sgarbossa claims demand is growing fastest on the urban periphery.

“It takes time for people to get used to bike lanes because they have an impact on people. Bike activists put pressure on us to implement, but residents have a certain initial resistance, which is normal,” he says, echoing other battles over bike lanes in places like Brooklyn, New York.

Sgarbossa, for his part, also complains, “We want bike lanes that prioritize bikes, whereas they [EPTC] build them in a such way so as not to inconvenience cars. Their bike lanes are made with automobile logic.” Vigna’s vision is more comprehensive given the EPTC’s multimodal responsibility. “What a cyclist understands as priority, we understand as reducing safety, our number one focus. Sometimes a bike lane crosses an exclusive bus corridor, and for us, priority for buses is more important than priority for bikes,” he responds.

There are examples of less contentious partnerships with EPTC once bikers come to a stop. Marcelo Bohrer, who runs a boutique advertising firm, saw an opportunity to benefit both local businesses and cyclists by facilitating the installation of bike racks. Inspired by New York City, where research showed a 49 percent increase in business on streets with bike racks, he managed to get city hall, with the support of the local business owners association, to agree to install 50 of them.

That was in February. “I got sick and tired of waiting and decided to do it on my own,” Bohrer says. In June, he launched POA Bikes (not to be confused with the ride share system), whereby businesses pay R$275 ($124 USD) for a bike rack with their logo. EPTC is also the agency responsible for street furniture, so Bohrer did the legwork – a process he called “very bureaucratic” – that busy merchants otherwise couldn’t be bothered with.

“I tried for six months to get a bike rack in front of my store and opted for POA Bikes because it was so much easier,” says Gustavo Dias, an early adopter for his chocolate store. “I already have clients who come by bike and ask the staff to keep an eye on it because they don’t have a safe place to lock it. People also use it to visit other stores on the block, which is fine by me.”

But even as Porto Alegre becomes bike friendlier bit by bit, danger lurks. In separate incidents on March 20, buses killed two young women on bikes. Meanwhile, the perpetrator of the Critical Mass attack remains unsentenced, despite having confessed to the crime, because of the slow Brazilian judicial system.

Even with the bike boom, Araújo remains equivocal. “In the case of the two girls, there were news reports and city councilpeople denounced that bus drivers aren’t punished for traffic violations and are given unrealistic schedules that force them to drive too fast,” she says. “But after two or three weeks, it quieted down. Bad shit still happens.”