Turning to the Resourceful City – Next City

Turning to the Resourceful City 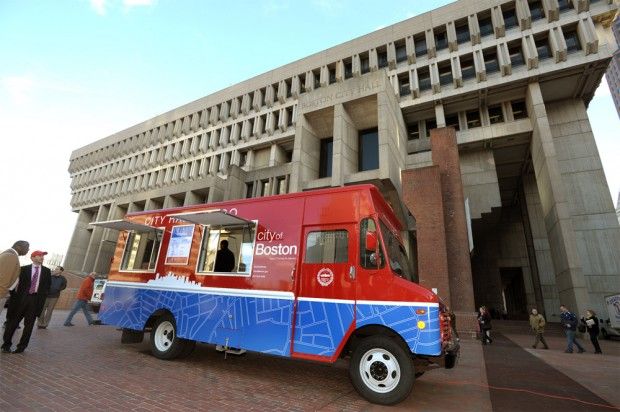 City Hall to Go makes it easier for Bostonians to file permits and pay taxes. Credit: Isabel Leon/City of Boston

“We need to find new ways of channeling the world’s resources in ways that are smarter, more efficient and ultimately more meaningful,” Next City Executive Director Diana Lind said Tuesday night at a symposium hosted by the University of the Arts in Philadelphia. “There is no better platform for doing that than the city itself. Cities are places were there increasingly is not enough space, there seems to be not enough money.”

A collaboration between Design Philadelphia and the Corzo Center for the Creative Economy, the symposium dealt with the issue of “creating with constraint,” a theme relevant to today’s cash-strapped cities. Lind, who addressed both the auditorium and listeners in Mexico City via a livestream, centered her comments on strategies for doing more with less.

Recognizing that cities today face tighter budgets and struggle to provide necessary municipal services, Lind spoke about how to create a “resourceful city” that isn’t indebted to budgets solely defined by taxpayer intake and public-sector output. Emphasizing the role of public-private partnerships, public-interest design and innovation, she suggested a wholesale redefining of a city’s assets and obligations. “The resourceful city moves beyond budget pie charts,” she said.

Lind highlighted the city of Boston’s food truck-inspired, mobile municipal services vehicle, City Hall to Go. Meant to make it easier for citizens to perform basic municipal interactions like filing a permit, obtaining a permit or paying taxes, the mobile office, if successful, could also be a financial win for Boston by reducing staff needs at City Hall. “This is the kind of project that rethinks how the city is going to function from head to toe,” Lind said.

Libraries are another service that many cities are rethinking for the 21st century. Lind pointed to Cleveland, which is providing library services in street installations that resemble large newsstands and can be inexpensively set up to meet neighborhood needs.

“That more neighborly level of engagement between the city and the people will change the conversation around some of these municipal services really being threatened,” Lind said.

(In San Antonio, to name another example, officials are moving toward book-less libraries.)

Lind also spoke about how cities in the Global South have adapted to unresponsive governments by developing informal systems for transportation and economic transactions. The “informal city” — the topic of a new Next City project — shows, Lind said, a “resourcefulness at the very most personal and ungovernmental level.”

In cities like Accra, Ghana, people have found ways to recycle old cell phones and turn it into a growing business. Also in Accra, men have turned an abundance of affordable motorcycles from China into a taxi service on two wheels.

“How do we informalize our formal economy as a result of seeing all this exciting energy coming out of the Global South?” Lind asked.

One route for change, she said, is through exploring public-private partnerships.

The Chicago Infrastructure Trust is one such an example. Under the Trust, the city of Chicago would seek private bids to repair the city’s infrastructure.

“There are resources that abound in cities like Chicago, and we have been inadequately capturing them,” Lind said.