New L.A. Kitchen Co-Working Space Is Good for Chefs, Foodies and Even the Health Department – Next City

New L.A. Kitchen Co-Working Space Is Good for Chefs, Foodies and Even the Health Department 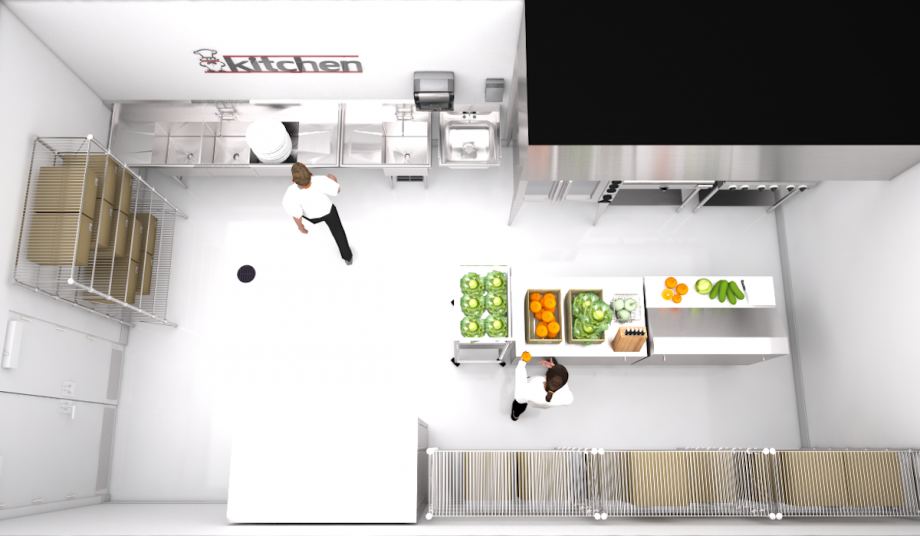 The creation of fresh pasta requires a deceptively large amount of real estate. The spaghetti that Leah Ferrazzani makes in her home kitchen requires a full 24 hours of air-drying before it is fit for consumption. With limited space for draping noodles to dry, Ferrazzani can make just enough spaghetti for daily shipments to a few Los Angeles-area farmers’ markets.

At this rate, Whole Foods will have to wait. “There are some significant limitations on myself as a business,” says Ferrazzani, who sells her pasta under the brand name Semolina Artisanal Pasta. “I can’t ship product, everything has to be hand-delivered. I can’t sell out of the county.”

Just as Los Angeles has a reputation for food deserts, the city as a whole is something of an entrepreneurial desert for artisanal food producers like Ferrazzani. As is the case in inspection-conscious cities around the U.S., the L.A. County Department of Public Health essentially requires all but the smallest-scale producers to work out of restaurant-style kitchens that meet strict heath codes. Those who wish to expand must either invest hundreds of thousands of dollars in their own kitchens, or they turn into “gray market” operators, borrowing restaurant space in the dead of night.

L.A. Prep is hoping to help these food entrepreneurs compete, if not with Kraft and Nabisco, then at least with Amy’s and Annie’s. Set to open next month in a 56,000-square-foot former warehouse, L.A. Prep will have 50 fully licensed, professional kitchens; it’s basically co-working for cooks.

“Despite the fact that L.A. has perhaps the largest and one of the most vibrant small food-maker communities in the country, it’s nearly impossible for [them] to make the leap from farmers’ markets,” says Mott Smith, the developer behind the concept.

Each L.A. Prep unit is described as turnkey, meaning that chefs can walk in on Day One with an armload of ingredients and walk out with goods ready to sell. Ferrazzani, who will be one of the pioneering tenants, estimates that she’ll double her pasta output, from 45 to 90 pounds per day.

L.A. Prep will probably have the highest concentration of professional kitchens in any building in the world. But, for Smith, the design was only half the battle. He also needed the health department to bend its own rules to accommodate a new type of professional kitchen: L.A. Prep, according to Smith, is the “first of its kind” in the country.

The county’s current “Cottage Food Laws” allow cooks to work in their own homes but only if they sell their food directly to consumers, as at farmers’ markets. Once products show up on shelves in different grocery stores or even specialty stores, the danger of a pathogen outbreak grows exponentially. Until L.A. Prep, there was no (legal) middle ground between cottage production and large-scale industrial food-making.

“It’s probably fair that we re-look at the regulations so that we can tailor those regulations to ensure food safety but not discourage these innovative food systems,” says Angelo Bellomo, director of environmental health at the health department. He admitted that the agency’s single-minded focus on food safety has meant that it wasn’t “sensitive enough” to the regulations’ economic impacts.

This attitude marks a welcome change, according to Ferrazzani.

“Right now the health department is starting to see that there are a lot of ways that they can still keep people safe but also be more open-minded about the way they regulate things,” she says.

For Smith, this marriage of inventive design and progressive policy reforms represents the best side of real estate development.

He has built a reputation in Los Angeles for being what can best be called an activist-developer. An evangelist for the reform of parking regulations, he also helped found California Infill Builders Federation and developed one of the first projects to take advantage of the city’s Small-Lot Subdivision Ordinance.

“I’m passionate about experimentation and innovation in cities,” says Smith. “Everything I’ve done is about opening up the marketplace at the entry level … making it easier for small businesses to do their thing, innovate and realize that awesomeness that is implicit in L.A.”

An adaptive reuse project, L.A. Prep sits a block from a light-rail station in the transitional neighborhood of Cypress Park. Once at full capacity, tenants will employ upwards of 150 employees (compared with the 15 to 20 jobs there when the building was a warehouse, according to Smith), including at-risk youth and former gang members who work at L.A. Kitchen, a food bank that will serve as one of the anchor tenants. Another anchor tenant is Food Centricity, an “accelerator” that helps food entrepreneurs develop and grow their businesses. All of this is meant to stoke cross-pollination, mutual inspiration and even direct collaboration.

“Food makers by their nature tend to be passionate, sociable people,” says Smith. “They’ll get to learn from each other and vibe off each other … they’ll be able to put their products in each other’s products.”

As L.A. Prep’s first generation of tenants build their businesses, L.A. Prep itself will be planning its next move. Bellomo, of the health department, says he’s interested in reforming regulations to make operations like L.A. Prep easier to launch, and Smith is envisioning more LA. Preps and even “Preps” in other cities.

“We’re convinced that this is a model that is actually needed across the country,” Smith says. “We’re already looking at where numbers two, three and four might go.”