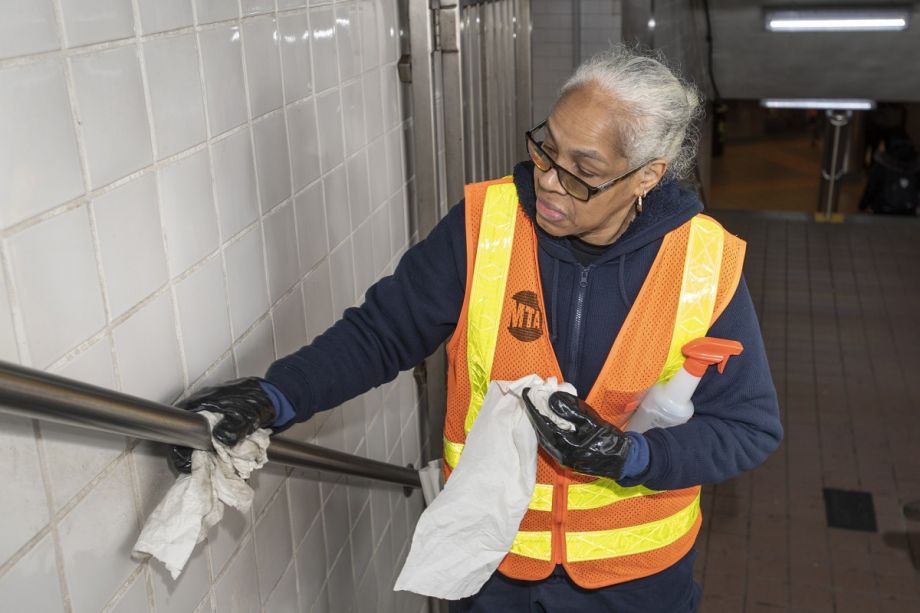 (Photo by Metropolitan Transportation Authority of the State of New York / CC BY 2.0)

The clearer skies and roads that have resulted from stay-at-home orders across the country and the world have not escaped the notice of policymakers, urban thinkers and state and local governments. Not letting a crisis go to waste, cities have taken advantage of the empty streets to start long-planned and long-avoided repair projects — and finish them at lightning speed and greatly reduced cost. Other cities, as this column has noted, have moved to claim some of the space cars have vacated for pedestrians, bicyclists, and other users of non-auto transport, but there remain some holdouts, as this week’s roundup will show.

Now some people have gotten into their heads the idea that we might be able to keep the roads clearer than they were before the COVID crisis once the worst of it passes. Of course, better mass transit plays a role in their thinking, but whether or not cities actually get it depends on a number of factors, including whether the money to pay for it can be found. And in the meantime, the transit providers still have to cope with keeping what they run clean enough for riders to use. Doing that has brought Broadway’s longest-running performance to a temporary end after 116 years.

That performance, of course, is the 24-hour, 7-day run of the 1, 2, and 3 subway lines beneath the street. Begun when the Interborough Rapid Transit Company’s first underground rapid transit line opened on Oct. 27, 1904, it came to an end at 1 a.m. Wednesday (May 6), when MTA New York City Transit closed the city subway system until 5 a.m. for overnight cleaning, the first time, CNN reports, that the MTA has intentionally shut down the system.

As Mass Transit reports, the overnight deep cleaning will take place every night. The shutdown also gives the MTA a chance to test the effectiveness of new cleaning methods and defenses, such as ultraviolet light and antimicrobial coatings that will be applied after rail cars and buses are cleaned with EPA-approved disinfectants.

New York Police Department officers will be stationed in all 472 subway stations to enforce the closing. The MTA has also come up with strategies to handle two other problems caused by the shutdown. It is working with NYPD to move people experiencing homelessness from trains and stations into shelters, a decision criticized by some advocates.

The other contern is transporting essential workers to and from graveyard-shift jobs. That job falls to a network of “Essential Plan Night Service” bus routes. The MTA has added 344 buses to the 235 already providing overnight service in order to increase the number of overnight runs by 1,168, or more than 76 percent.

Los Angeles is already known for its paucity of public open space for outdoor recreation. With the social-distancing requirements implemented along with California’s statewide stay-at-home orders, the need for such space has only grown.

Residents of one Westside neighborhood, Del Rey, thought they had the ideal solution to this problem: Claim some neighborhood streets down which very few cars run. During the last week in April, they announced that traffic would be restricted on about a dozen local streets in order to provide space for exercise and recreation.

Hours after the announcement, the Los Angeles Times reports, city officials stepped in to say, “Oh, no it won’t.”

The report notes that residents of Del Rey and other city neighborhoods had already taken to the empty streets to jog, dance, skate, ride bikes and play catch. In addition, sidewalks in Del Rey had become so crowded in the evening that residents seeking to observe social distancing rules now walk in the street.

The Del Rey Neighborhood Council had hoped that their traffic restrictions would become the first of many across the city that would create outdoor space for socially safe outdoor travel and exercise. In light of that, the explanation Mayor Eric Garcetti gave for blocking the restrictions seems strange indeed.

Garcetti told the Times that while he was supportive of efforts to limit driving down some city streets, Los Angeles County health officials considered this move premature.

County Department of Public Health Director Barbara Ferrer said she did not support neighborhood street closures at this time, he said. The reason? “It could draw too many people to one area — it could be something that spreads the disease,” Garcetti said. “So we have to be extremely thoughtful, extremely careful about it.”

Ferrer had said earlier that such closures needed to take place on a coordinated, countywide basis. The City Council member representing Del Rey, Mike Bonin, speculated that public health officials may have confused this request with others for events that close large stretches of streets and draw participants from across the region. He says he will write county public health officials to explain the difference.

FTA Sends Buffalo Back to Drawing Board on Rapid Transit Extension

The principal metropolis of Western New York, Buffalo, is also home to the most unusual light metro line in North America: It runs on the surface downtown and in a subway in the outlying neighborhoods.

Since it opened in 1984, the Niagara Frontier Transportation Authority has nursed plans to extend the line from its current terminus at the University at Buffalo South Campus just inside the city limits to the UB North Campus in Amherst. In 2013, after a previous extension attempt got shelved, the NFTA once again embarked on a project to extend the Metro line northward. Planning in earnest for the line began in 2018, with the NFTA selecting a mostly-at-grade light metro extension as the “locally preferred alternative.”

Now The Buffalo News reports that the Federal Transit Administration is sending Buffalo’s metro extension proposal back to the NFTA for further review, with the recommendation that the agency give bus rapid transit a second look.

The chief reason for the second look: Project cost. The NFTA estimates that it will cost $1 billion to build the seven-mile extension, and the FTA points out that a BRT line could be built in the corridor being recommended for the extension for less money and in less time.

In addition, the FTA also told the NFTA evaluate the benefits of doing nothing, known in the world of transit project funding as the “no build” option.

NFTA officials have long favored the rail option because it would offer UB students, faculty and staff a single-seat ride among the school’s three campuses (the existing line has a station at the UB Medical Campus midway along its route). The ridership gain from light rail, it says, would be greater than that produced by BRT and a transfer. In addition, the rail line would eliminate the need for UB to run its existing shuttle bus service connecting the North and South campuses.

The NFTA points out that the FTA hasn’t ruled out rail as an option and remains favorably inclined to fund transit improvements in the Amherst corridor. But even the NFTA acknowledges that increased competition for federal transit project grants makes the chances of getting the full $1 billion needed to build the rail line slimmer.

Further increasing the odds against the light metro extension: The area’s U.S. Representative no longer supports it. Brian Higgins, a Democrat who represents both Buffalo and Amherst, switched his position on the issue in 2018 and now says that beefed-up bus service will provide the sought-after improvements for less.

When former Obama White House chief of staff and Chicago Mayor Rahm Emmanuel uttered the now-famous phrase referenced above — “Never let a crisis go to waste” — he meant that times of severe disruption offered opportunities to radically rethink and change long-established habits and ways of doing things in order to achieve lasting change for the better.

Even though it’s necessary work, street, road and bridge repairs weren’t what Emmanuel had in mind when he said that. A Brookings Institution report released last Friday better reflects what he really meant.

The report suggests ways we can answer “Yes” to this question: “Coronavirus has shown us a world without traffic. Can we sustain it?”

Even though vehicle miles traveled (VMT) — the standard metric for measuring auto use — will not and cannot remain at the current negligible levels once the stay-at-home travel restrictions are lifted, the report says it is possible to keep it from returning to pre-COVID levels and establish a new, lower level of auto use in general.

“The COVID-19 lockdown has enabled the country to execute a transportation experiment at an almost unfathomable scale,” the report says. “Those results should give us hope that it’s possible to reduce congestion, deliver a safer and greener transportation system, and still bring the economy back to full capacity.”

The first step to this new normal, the report says, is demand management. Reports have shown that employees working from home actually produce more, and the article recommends that large employers and regional business groups promote more flexible work arrangements that include telecommuting.

On top of that, the report continues, it’s time to make an idea that’s been discussed for some time now and tried on an experimental basis in a few states a nationwide reality: Shifting the source of transportation infrastructure funds from motor fuel taxes to VMT fees. Alternative-fuel and more fuel-efficient vehicles have already led to revenues to state transportation departments not keeping pace with increasing road use, and the drop in travel has exacerbated the problem by sending fuel-tax revenues over a cliff. As tracking technologies are now being used to map coronavirus-related activity without a huge public backlash, the report argues, this would be a good time to deploy VMT tracking on a general basis.

Finally, there’s the issue of allocating road space among the various uses for it. Pedestrians, as some state driver’s license manuals point out, may have a natural right to use all of the road, but our modern streets and roads have been configured primarily to accommodate motor vehicles. The social-distancing requirements of the COVID era demonstrate that this balance is out of whack and not enough urban road space is dedicated to pedestrians and other non-auto transport. The article argues that if “build it and they will come” has proven true — and it has — then its inverse should also apply: Take it away and they will disappear. Here, “it” is road space devoted solely to cars and trucks, and “fhey” are the motorists operating those vehicles. Give those motorists more space to do something other than drive, the report says, and they will drive less.

Know of a development that should be featured in this article? Send a Tweet with links to @MarketStEl using the hashtag #newstarts.