Is the Next Frontier of Green Space Underground? – Next City

Is the Next Frontier of Green Space Underground? 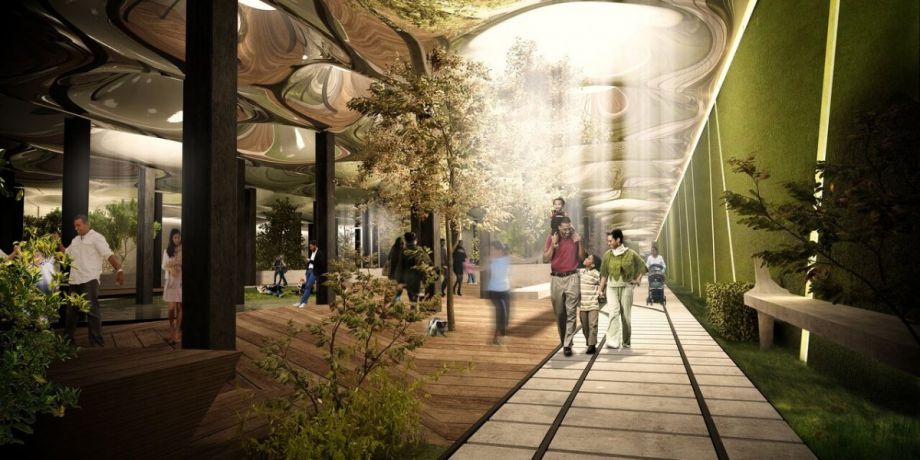 At watering hour in the Lowline Lab, a garden inside an old indoor market on Manhattan’s Lower East Side, the air smells like moss. Dozens of sixth-graders, out for a class trip, have joined the gardener, firing spray bottles at the plants and each other.

At the center of the room are two hillocks of scrubby jungle, split by a walkway. Flanked by hanging clusters of ferns and lichen, a tapering column of plants rises to the ceiling — a suspended array of metal hexagons and triangles, like a supersized web of Polydron toys, which diffuses light throughout the garden.

This is the first venture of the Lowline, underground park fantasy and Kickstarter darling, into the real space of New York City. Its supporters hope the park will one day occupy the abandoned Williamsburg Trolley Terminal, two blocks south. For now, the Lab has filled this city-owned warehouse with a living model for how a park might take shape in the sunless space below Delancey Street.

They call it a lab, but it feels more like a theater. The concrete floors and black curtains recall so many theatrical spaces reclaimed from industrial use. Floodlights illuminate the plants from all sides, supplementing the light piped in from the roof. Watching the grass grow is more or less the point.

“The primary purpose is to establish a palette for what will grow here,” says James Ramsey, an architect and one of the project’s co-founders. Ramsey, whose firm RAAD helped design the space, has his eye out for particular plants: a mushroom, a strawberry, a mint plant he likes to munch on, a pencil tree whose dull green fingers had multiplied since his last visit. He was shocked to see how much the plants had grown over the past 10 days. Looking over the landscape, he wondered with a hint of excitement, “Is this going to fill the room?”

Ramsey wants the Lowline to look cave-like, post-apocalyptic and a little disorienting. He draws his inspiration from cenotes, the Yucatan sinkhole pools that the Maya held sacred, and the Terry Gilliam film Twelve Monkeys. A bit of wildness — in the form of a tree frog and a lizard — has already found its way in. Still, Ramsey would like to leave nearly half the space in the Lowline unadulterated, so visitors can appreciate its historical roots.

Should the Lowline be built, Signe Nielsen, whose firm Mathews Nielsen is the landscape designer for the Lab, says it will feel much less like an exhibit at the botanical garden. “It feels more like a plant experiment and a light experiment than a people space, but that’s not the long-range goal,” she says.

The goal — “a great public space that happens to have plants in it” — wouldn’t be an unusual aim, except that this public space is supposed to be underground, a park with no sunlight and no seasons.

“One of the challenges is that the sun in the sky moves from east to west, and in this case the light is stationary, which means there are dark sides of the moon,” Nielsen explains. Rooftop tracking mirrors, designed by Ramsey, direct the sunlight through a series of tubes into the room. Still, Nielsen says, “the light is one-directional, and it’s stationary.”

And there isn’t much of it. Hence the initial plant profile of dozens of tropical species that thrive in low light and moderate temperatures. “If you look at it right now, it’s not all that different from someone who’s an avid collector of houseplants,” Nielsen concedes. “We’re trying to expand that diversity.”

It’s in that sense that the Lab is an experiment, in addition to providing publicity for the proposed park. The goal is to figure out not just what plants will thrive, but what kind of reactions they will get from visitors. (Edible plants, for example, tend to provoke a lot of excitement.)

The day I visited, the middle-schoolers were asked to come up with their own suggestions for the underground park. A few — TV, laser tag, an indoor pool — seemed unlikely to make the cut. Others — swings, a tree fort, rainbows — seemed within the realm of possibility.