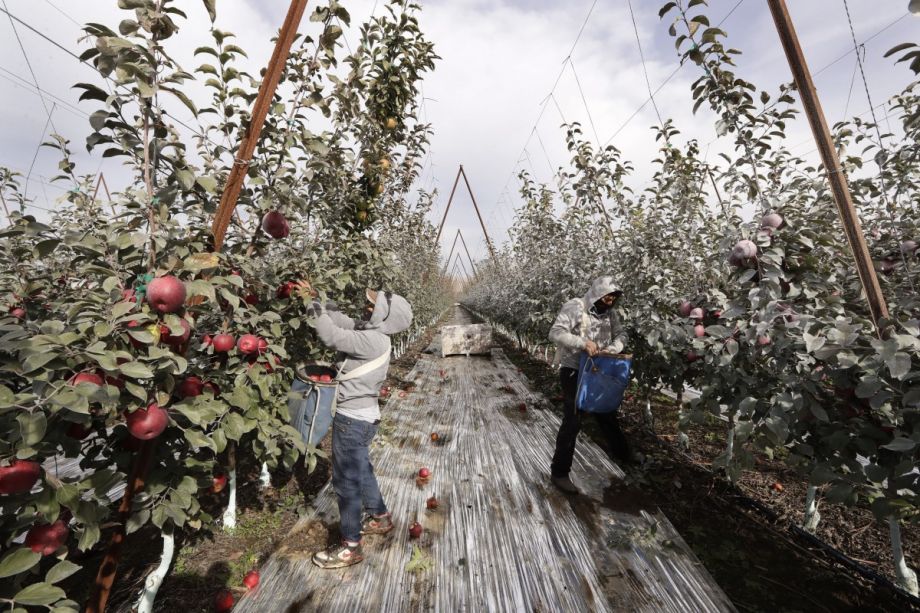 On a crisp May morning in Washington’s Yakima Valley, Blanca Olivares took her break from sorting apples at the Allan Brothers packing facility a little early. Soon, five other workers joined her in the outdoor patio area. Together they waited, disappointment creeping in when more didn’t follow. Little by little, however, employees trickled out. Within the hour, 40 to 50 people had congregated, and the first in a string of labor strikes that would include hundreds of workers at seven fruit packing facilities in the valley had begun. “I didn’t know anything about strikes,” Olivares said, through a translator. “I just knew that if we all put our voices out there, then maybe they would listen to us.”

The labor actions — catalyzed by frustration over inadequate protections and compensation during the COVID-19 pandemic — swiftly grew into a protest against industry working conditions in general, according to Rodrigo Rentería Valencia, an anthropology professor at Central Washington University and member of the Washington State Commission on Hispanic Affairs, who chronicled the strikes and interviewed dozens of workers. The strikers held out for weeks, their fight demonstrating the nascent power of the region’s agricultural workers and the challenges they face in having their concerns heard.

Yakima’s first case of COVID-19 was reported on March 8. Rumors swirled, but little solid information emerged about the spread of the virus within workplaces. Employees at fruit-packing plants, who are predominantly Latino, feared the virus could spread rapidly in the close quarters of sorting and stamping lines. Their concerns were justified: According to the Yakima County public health department, as of early June, more than 800 agricultural industry workers had tested positive for the novel coronavirus, accounting for nearly one-fifth of the more than 4,000 cases in the county. Twenty-nine of them worked at Allan Bros.

Latinos and people of color are more likely to be exposed to COVID-19 because they disproportionately work in jobs deemed essential, and they are more likely to develop complications from the disease due to lack of access to healthy food and reliable health care. Latinos, who make up just 13% of Washington’s residents, accounted for 43% of the state’s confirmed COVID-19 cases. On May 30, David Cruz, a longtime worker at the Allan Bros. plant, died after being hospitalized with the virus.

Olivares, whose daughter is a nurse, was well aware of the seriousness of COVID-19 and the heightened risk in her work environment. She likened her job to being the joker in a card deck — able to fill whatever role is needed. As she moved between different areas of the facility, workers expressed their unease about the sickness and their working conditions.

Olivares emailed management and requested a meeting to address the problems. But rather than engage her directly, the manager and human resources staff bypassed Olivares and went to others on the line first, gauging the mood before addressing the squeaky wheel. Workers grew frustrated as their chosen representative was left out of the process.

Poor lines of communication and hard-to-break hierarchies are common in agricultural work. “Perhaps most upsetting for workers is the industry doesn’t allow workers a voice within the pyramidal structure,” said Rentería Valencia, who biked a couple miles to the Allan Bros. strike when it first started. Instead of taking their grievances directly to the owners, workers must communicate through managers, who can abuse their power to silence them, he said. At the same time, the workers felt that state-level authorities were deaf to their concerns about COVID-19.

Olivares began reaching out to employees with whom she rarely interacts, including night-shift workers and those in separate areas of the facility. They soon realized that each cohort shared similar frustrations, Olivares said. Momentum for collective action grew.

Despite the lack of a union or experience with organized labor, the ad hoc coalition was tapping into a long history of farmworker solidarity in the Yakima Valley. In the 1960s and 1970s, agricultural industry organizers east of the Cascades found common cause with the emerging national “Movimiento,” which included the likes of César Chávez and Reies Tijerina, and began forming unions and community support groups among local Hispanic agricultural workers. Organized labor in the area has since dwindled. But vestiges of the early farmworker movements remain, including Radio KDNA, a public Spanish language news station — one of the few places local workers could get basic information on COVID-19.

After leading the initial walkout on May 7, Olivares stepped back to let other voices take over. “The hardest part was to dare to do it,” said Olivares, who credits her mother with teaching her the importance of speaking out and God for making her a courageous woman. “But once you dare to jump, you have others there to support you.”

One of those voices belonged to Agustín Lopez, who joined the strikes at Allan Bros. Knowing a bit more about how strikes worked, Lopez made sure that the workers stood together on their walkout until the final decision was made to declare a strike and form a picket line. “I’m not the guy that started the walkout,” Lopez said. “It was my job to support my co-workers.”

Once the workers at Allan Bros. took the leap, others across the valley felt empowered to follow. Eventually, workers from six other packing facilities in the Yakima Valley went on strike. Rosa León, a worker at Matson Fruit Company, said that the lack of social distancing within the facility, and management’s practice of selling — rather than giving — masks to workers, motivated her to join the strike. “COVID-19 gave us the power to speak up,” León said. “I’ve been there four years, and never before have workers organized.”

Eilish Villa Malone, an attorney for the Northwest Immigrant Rights Project who works primarily with immigrant agricultural workers, also took part, rising at 4 a.m. to organize delivery of meals, coffee and supplies to strikers before and during her normal workday. “At first, I was just out with my friends in solidarity, then all of a sudden I was completely engrossed,” said Villa Malone. As she traveled between strike sites, she also educated workers — particularly the undocumented ones — about immigration rights.

After 22 days, striking packers at Allan Bros. started to return to work, with negotiations underway between a newly formed workers’ committee and ownership.

Just as she was the first to walk off, Olivares also wanted to be the first to return to work. She was welcomed back respectfully, and the strike officially ended the next day.

Back on the job, Olivares was given gloves and a face shield. Line speeds on the conveyor belt had been slowed down to ease the work and allow more distance between the workers. Olivares appreciated the changes, but worried that the shield she was given could get caught in the machinery and injure her. She brought her concerns to a manager with whom she’d been at odds in the past, who came back 30 minutes later with a different option. The quick response felt like a major improvement and a sign that workers were more likely to be heard in the future.

Workers at all seven packing plants have now returned to work after gaining concessions on better pay, safety and the formation of worker committees to advocate on behalf of their peers. Washington Gov. Jay Inslee, D, also released new workplace safety standards for agricultural workers after protests at the Capitol in Olympia and a lawsuit against the state Department of Health and the Department of Labor and Industries.

“Everybody needed a little push — owners, management, peers, even those that didn’t join the strike,” Olivares said. “We pushed ourselves to change; now everyone is better for this push.”

This story was originally published by High Country News; you can find the original story here. This story is part of the SoJo Exchange of COVID-19 stories from the Solutions Journalism Network, a nonprofit organization dedicated to rigorous reporting about responses to social problems.

Carl Segerstrom is an assistant editor at High Country News, covering Alaska, the Pacific Northwest and the Northern Rockies from Spokane, Washington.