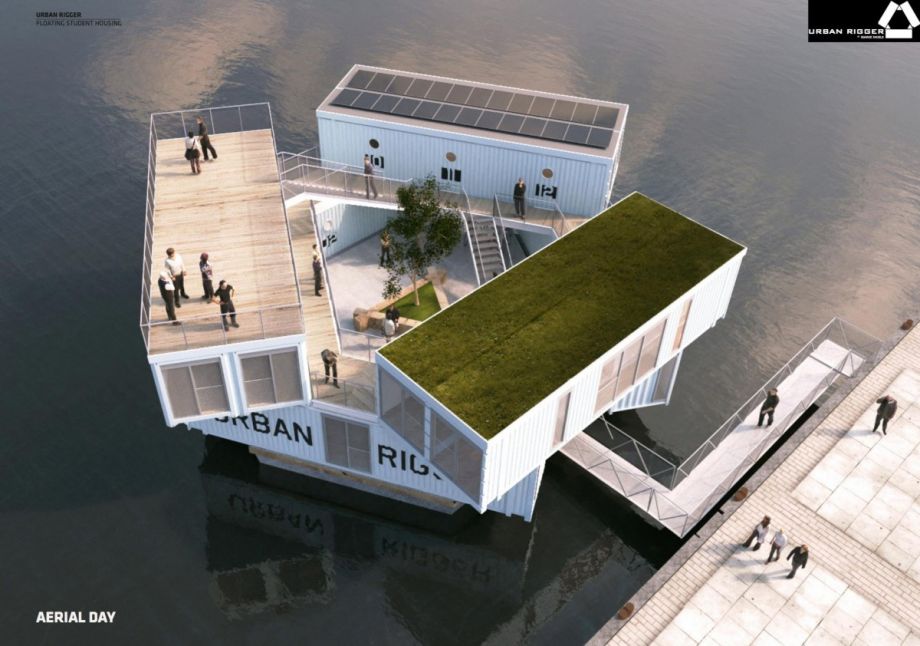 A rendering of a floating dorm (Credit: Urban Rigger)

A lack of affordable housing in city centers prompts some university students to rent far from the core, which can keep them from contributing to communities around their urban-based campuses. A Copenhagen housing startup thinks it has a solution: Build affordable student housing right downtown in a currently unused space — on the water. According to Fast Company, Urban Rigger just completed its first floating modular dorm in Copenhagen’s harbor, and more floating dorms are in the works.

The dorms were designed by architect Bjarke Ingels, who was born in Copenhagen. His firm, BIG, was a winner in HUD’s Rebuild by Design competition, which encouraged entrants to think about resilient cities after Hurricane Sandy.

Each Urban Rigger unit houses 12 students and is composed of modular shipping containers powered by sustainable technologies. A photovoltaic array provides power; a heat-exchange system draws upon the thermal mass of water to warm and cool the interiors, and NASA-developed aerogel insulates the interiors. The floating dorms cost about $700 to $800 per square foot to build, and rent for $600 a month.

The units are also somewhat modeled on communal living, with private bedrooms, bathrooms and kitchens, but shared areas like a roof terrace, kayak landing and courtyard.

Urban Rigger found that 80 percent of major universities in Europe are located in the urban core of capital cities, and many are also near bodies of water. It hopes that putting student housing downtown and out on the water makes it easier for students to create connections with their school and surrounding neighbors.

“The education of our youth is one of the best investments any society can make,” Ingels told Fast Company. “To make it possible to find someplace to live that is enjoyable and will enable them to become better students. In that sense, not investing in our future is simply the worst place to cut corners.”

The floating model depends on having space in waterfront areas to dock the dorms. While waterfront properties are often home to luxury developments and access to this space could be pricey, Urban Rigger hopes governments will open up city-owned land because many public universities are among those experiencing housing shortages.

Urban Rigger makes the case that floating dorms are better for waterfronts than pumping them with artificial infill, which is both expensive and susceptible to climate change impacts.

“In terms of sea level rise, this is the most resilient form of housing because it moves with the water,” Ingels says. “It’s the only building type that will never flood.”

Another 24-unit floating dorm is currently in the works in Sweden, and Urban Rigger hopes to bring its model to cities across the world, whether for more student housing or to alleviate the refugee housing crisis and other affordable housing shortages.