Was Your Mayor at COP21? 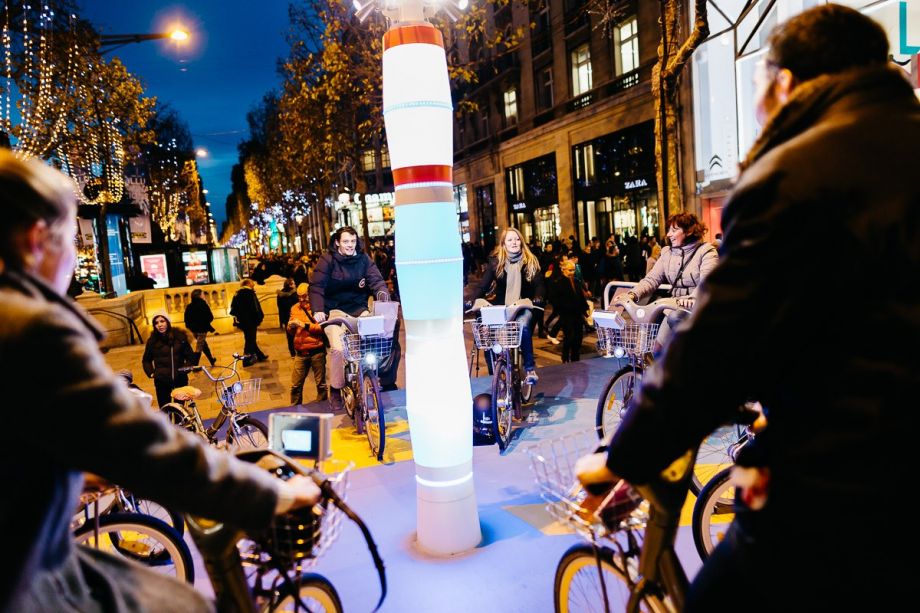 Anyone walking down the Champs-Élysées during COP21 could hop on a bike sponsored by IKEA to help generate the electricity for some of the lights on the street. (Credit: IKEA)

The momentous climate accord signed at COP21 in Paris last weekend deserves every bit of the international fanfare it has received in the last several days, but the conference was much more than a diplomatic feat.

Seasoned COP attendees told me COP21 was different because of two groups that came out in force: mayors and businesses. From international cities network C40 to the various national pavilions and organization booths, CEOs from urban areas and major corporations around the globe came to support a bold, ambitious, binding agreement that would reduce carbon emissions and encourage the production of renewables.

Cities’ gaining star status at COP21 makes clearer the leadership role that the world’s mayors will play going forward in planning for the effects of and combatting climate change. And the ideas presented at the pavilions underscore how federal governments and private companies can be important partners to mayors chasing that goal.

Booths were set up and demonstrations were held at venues across the city. The Grand Palais played host to “Live the Climate Experience.” There the public could find everything from an explainer of how sugar cane is a viable renewable alternative to fossils fuels, and a presentation of a robot that purifies air, to an exhibit of French design students’ ideas for promoting recycling, and a panel on private investing in an era of climate change.

Interactive stations sponsored by IKEA invited people to run, cycle or slide to power one of the most famous streets ever, the Champs-Élysées. Massive solar panel installations and a wind turbine in the middle of a roundabout across from the Roué de Paris reminded the serious shopper as well as the casual tourist that renewables are the thing.

At the Eiffel Tower, where avant-garde artist Naziha Mestaoui’s “One Heart One Tree” projected a visual forest and inspiring messages about sustainability, visitors were encouraged to contribute 10 Euros to plant a tree via a mobile app.

U.S. state and national leaders were also in Paris. California Governor Jerry Brown and 10 senators, including Al Franken and Cory Booker signaled American support for an agreement. It was regrettable that no elected U.S. Republican official chose to lend a voice at COP21. According to Andy Karsner, former energy adviser to President George H. W. Bush and now a Google senior adviser, the party risks losing voters under the age of 35 if they don’t engage in and address climate change. (Will “GOP” just stand for Gas, Oil, Petroleum someday?)

Non-governmental organizations (NGOs) shared knowledge, promoted causes and, in a few cases, entertained or provoked. SustainUS harnessed the youth movement to a new level, making sure delegates and others knew how important climate change is to the next generation. Climate justice organizations challenged the deciders to do more, calling press conferences and staging rallies to increase pressure. Research organization World Resources Institute identified six challenges for the world to solve: food, forest, water, climate, energy and cities. Ani Dasgupta, global director of WRI’s Ross Center for Sustainable Cities, says COP21 will ensure cities are an important part of the conversation.

I approached COP21 as an opportunity for Next City to build a solid foundation for Habitat III and the New Urban Agenda. My experience at what may be a seminal event in world history tells me that the road to a carbon-free world is ahead of us, if only we lead. We’ll continue to track the people, organizations and issues that underlie the drive to be carbon free. Whether we achieve that and other COP21 goals will depend upon each of us. With mayors, corporations and consumers leading, can Congress, the so-called “Lagging Indicator” be far behind?