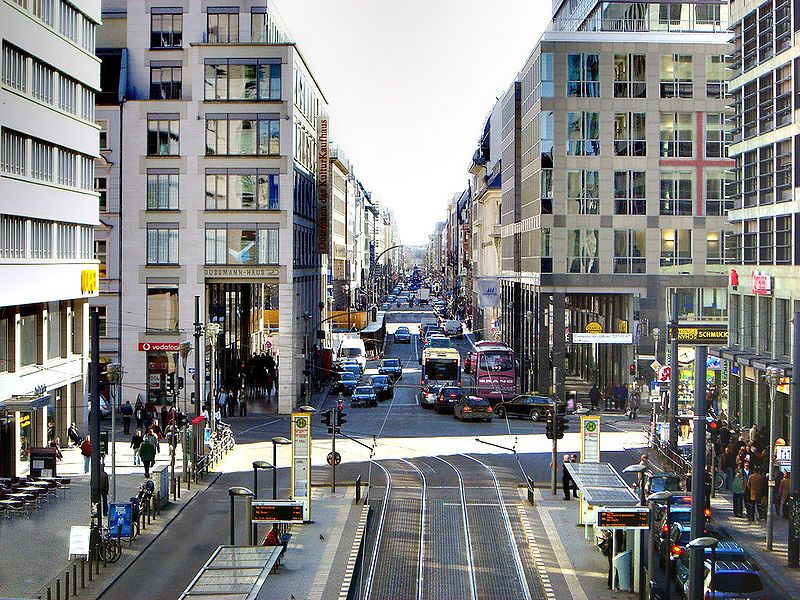 German cities, including Berlin, above, are leading the way in mitigating and adapting to climate change.

Tom Dallessio, president, CEO and publisher of Next City, is at the United Nations Framework Convention on Climate Change, COP21, in Paris, where he is calling for 160-plus nations to approve an aggressive plan to limit fossil fuel emissions and support progressive and viable mitigation and adaptation efforts through urban planning, design and infrastructure improvements. The following is adapted from a speech he’ll make within the COP on Monday, December 7th.

In his opening speech here at COP21 last Monday, French President François Hollande stressed that never before have the stakes of an international conference been so high, because when dealing with the increasing threat of climate change, the future of the planet itself is at stake. We at Next City believe COP21 is of critical importance to the future of cities, and the agreements made here will help advance a New Urban Agenda around the world.

At Next City, we understand that cities around the world are extremely vulnerable to climate-driven disasters and disruptions that will affect the economies, environments and society as a whole. We know cities are uniquely vulnerable to climate change, but that they also hold incredible potential for bold and effective advancements in mitigation and adaptation. That’s why we are calling for a strong global climate change agreement that will limit carbon emissions and reduce the exponential increase in global temperatures.

More than 180 countries are joining this international conference, seeking agreements that will contain the rise of temperatures. The United States can and must play a leading role in ensuring agreements that limit carbon emissions, support green technology and take other actions to reduce the global increases in temperature. A strong, well-designed climate agreement can strengthen economies, and ensure a positive future for the environment.

International consensus on climate mitigation and adaptation is key to developing an effective New Urban Agenda, which is anticipated to be approved next October at Habitat III. Organized by UN-Habitat, this event in Quito, Ecuador, will chart a new course to ensure that our cities meet the demands of the 21st century.

UN climate chief Christiana Figueres has indicated that there won’t be one binding agreement; in the speech that started COP21 last Saturday, she spoke about the varying levels of “bindingness” that give multiple opportunities for participation and action. French Foreign Minister and COP21 President Laurent Fabius stressed the human face of climate change, recalling his encounters with people around the world directly affected by climate impacts. He noted that hundreds of millions of people depended directly on the solutions to climate change that delegates will reach at this conference.

Many countries, both developed and developing, are taking aggressive steps toward mitigating and adapting to climate change. Germany is leading the way, setting a goal to reduce GHG by 95 percent by 2050, compared to 1990 with low-emissions transport systems, energy-efficient buildings, climate-smart sewerage systems and regulated waste-disposal systems. German cities are modeling the change as they build green infrastructure and invest in resilient neighborhoods. Cities, states and regions are also stepping up to the plate, as are the private and nonprofit sectors. We Mean Business Coalition, a voice of leading businesses and investors at COP21, termed it “ratcheting up the ambition.”

Throughout COP21, the challenges of adaptation and mitigation have been focused mostly in rural areas. We need to more aggressively incorporate cities into emission reduction plans and mechanisms for clean development. Leveraging the built environment by addressing resiliency and sustainability is the seminal opportunity of the next century.

Cities are growing astoundingly fast: 1.4 million people move to cities each week. It is estimated that by 2050, four out of five people around the world will live in cities and towns. Over 80 percent of that growth will be in developing nations. At the same time, from South Asia to the southern U.S., cities will be bracing for an influx of climate refugees — people displaced and forced to relocate by warming temperatures, rising seawaters and increasingly frequent natural disasters. Increasingly, world leaders are acknowledging “climate justice,” and viewing equitable responses to climate change as an inherent right. In his encyclical, Laudato Si, Pope Francis recognized climate change and the moral imperative of urban planning. “Climate change is a problem which can no longer be left to a future generation,” the pope told the U.S. Congress in September, inviting a contrast with the civil rights struggle by invoking the spirit of Martin Luther King Jr. in support of his argument.

One of the less visible impacts of climate change will be increased energy costs around the world. The higher price of transportation, home heating, cooking, etc., will force already marginalized communities to make harsh decisions and trade-offs. Land tenure and home tenure decisions could also potentially harm the disadvantaged.

The good news is that cities around the world are emerging as leaders in the fight against climate change, embracing low-carbon transportation, high-efficiency buildings, renewable energy and other strategies to reduce emissions while building more vibrant neighborhoods. How our cities are built is a key factor in the intensity of urban energy use. From the types of housing and commercial buildings, to our road networks and transport systems, to how we get our heat and power, urban infrastructure determines, to a great extent, whether a city has high or low GHG emissions.

The Stockholm Environment Institute and the C40 Cities Climate Leadership Group recently looked at two scenarios of urban development over the next 15 years. They found that new, energy-inefficient urban development may substantially “lock in” future CO2 emissions, as roughly 30 percent of future CO2 emissions “committed” annually occur due to new, urban building and transport systems. However, in an aggressive “urban action” scenario, urban policymakers can instead deploy the most energy-efficient technologies and urban design, and avoid committing about 45 Gt CO2 of cumulative future emissions. As the Institute’s authors contend, “Making these choices now, instead of attempting costlier retrofits later, can substantially lower the cost of meeting stringent climate objectives for cities and nations alike. At the same time, retrofitting of existing infrastructure — urban and otherwise — is also necessary to ‘unlock’ the existing roughly 800 Gt CO2 of emissions already committed and help keep emissions within the 1,000 Gt CO2 carbon ‘budget.’”

U.S. President Barack Obama recognized that COP21 is about future generations. His conclusion, “let’s get to work,” was a rallying call to action. At Next City, we believe strong agreements from the UN Framework Convention on Climate Change (UNFCCC) will limit carbon emissions and reduce the increase in worldwide temperatures. Without these agreements and actions, cities around the world are extremely vulnerable to disasters and disruptions that will affect the economic, environmental and societal systems.

The U.S. can and must play a leading role in ensuring agreements that limit carbon emissions and take actions to reduce the atmospheric CO2. While one international agreement — or even a U.S. national or jurisdictional agreement — would be ideal, we must not allow the carbon-financed naysayers in Washington to stop all progress. Absent Congressional support, President Obama, governors, like California’s Jerry Brown, who has already taken important actions, and mayors from across the country must commit to action, creating levels of “bindingness” that will be impossible for the climate deniers and “Know Nothings” to ignore. Just this week, more than a dozen mayors took a “10% Resilience Pledge,” committing to dedicate 10 percent of their annual budgets to projects and planning that will make their cities more resilient.

The decisions made at COP21 can and must advance strategies for green development, including climate mitigation solutions like carbon offsets, incentivizing more efficient development and other low-carbon strategies; as well as climate adaptation solutions, including growing the Green Climate Fund. Policy solutions must: 1) eliminate fossil fuel subsidies, 2) internalize the true costs of carbon and 3) level the playing field so that renewables can be the first choice energy source. Infrastructure investments must be resilient, sustainable and funded with revenue streams that penalize dirty power and inefficient transportation systems, and engage in public-private partnerships that harness market forces. Plans, regulations and programs at all levels of government must be developed collaboratively and transparently to represent and serve all people. Good, high-quality design must permeate these plans and programs, encouraging people to choose energy-efficient and healthier ways to live, work and shop. Together with the private sector, our leaders must create a bipartisan force that advances urban renewables, expansion of other green technologies and the conservation of our natural and cultural resources. This is the prescription for combatting climate change.

The work won’t end with COP21. Next fall, the international community will again gather — this time for Habitat III, with U.N. Habitat leading the conversation in Quito, Ecuador — to create a blueprint for 21st-century cities. Building on the COP21 agreements and the Sustainable Development Goals (SDGs) approved by the UN in September, this New Urban Agenda will provide a 20-year strategy for the world’s cities.

Next City will be in Quito and at the events leading up to Habitat III. We welcome you to join us on the journey to creating a New Urban Agenda — and a more sustainable, resilient and productive world.