Cooperative Works to Save the Only Black-Owned Bookstore in Kentucky 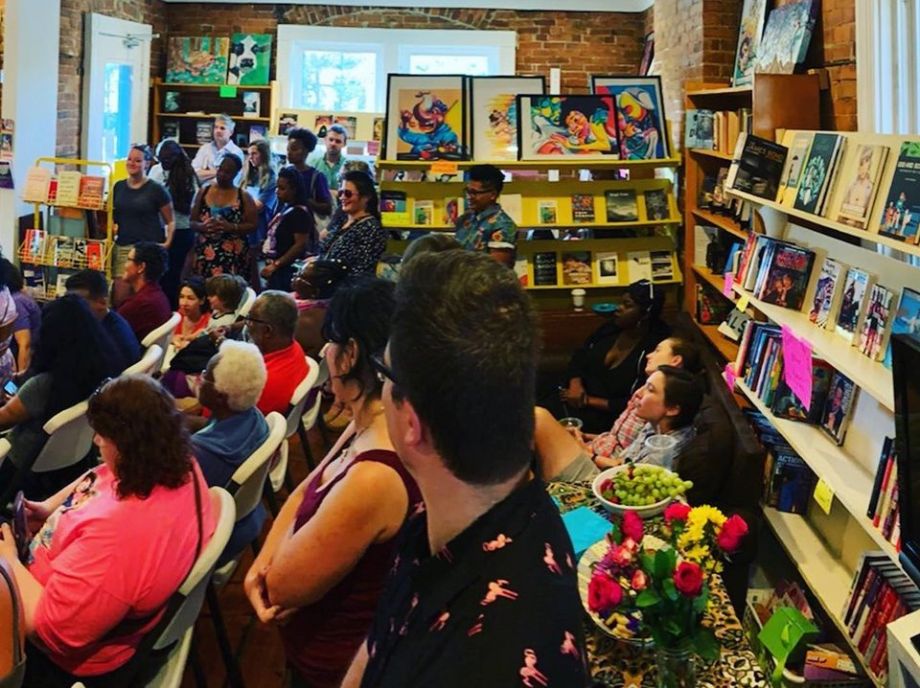 Patrons pack the inside of Wild Fig bookstore during an event. (Photo courtesy Wild Fig)

This week an eleventh-hour fundraising effort saved the only black-owned bookstore in Kentucky. It’s one of many efforts by Lexington community members to maintain the Wild Fig bookstore as a community hub over its eight-year history.

The Wild Fig’s history dates to 2011, when artist Ronald Davis and author Crystal Wilkinson opened it as the first, and only, black-owned bookstore in the state. Citing financial difficulties, the couple closed shop in 2015. Later that year, they seized an opportunity to reopen Wild Fig in a smaller location on the north side of the city. After three years in business, they announced they’d once again need to close the doors to the public.

The announcement set off alarm bells for Lexington community organizer April Taylor, as Wild Fig had become an important hub. “There aren’t necessarily a lot of safe spaces around town to have conversations about racial and economic inequality,” Taylor says.

Davis and Wilkinson put the business up for sale, and in less than 30 days, Taylor helped spearhead a community fundraising campaign raising $25,000 to buy it. The community not only saved the business but kickstarted its transition into a worker cooperative. Taylor is now one of seven co-owners of the Wild Fig.

Since reopening as a cooperative last year, the struggle to keep the doors open has not subsided. This month, Wild Fig launched a series of events to increase traffic and generate enough profit to make it through the summer. In a down-to-the-wire fundraising effort launched this week, the bookstore raised just enough money to pay its August rent.

“The way the Fig came into community possession is really unprecedented — in some ways it’s the cart before the horse,” explains Taylor. “Most communities organize for months or years before they come into possession into a business, but for us it was a space we saw as safe and sacred and wanted to hold onto, and within 30 days we had possession of a business.”

“This is new for all of us,” Taylor says, “But there’s a legacy of black bookstores we want to honor and carry on.”

Black-owned bookstores have made something of a comeback in recent years: the number of businesses peaked in 1999 with 324 but fell to a low of 54 in 2014, according to the African American Literature Book Club. By the end of 2018, there were 110 black-owned bookstores.

But the history of black-owned bookstores — which often double as organizing and community hubs — includes threats to their existence. At the height of the Black Panther Movement, for example, “radical” black bookstores were targeted by the FBI.

Cooperatives, too, have played an important role in African American history. Jim Embry, a supporter of Wild Fig and director of the Sustainable Communities Network, traces his own family history to farming worker collectives that emerged after the Civil War. In the 1970s, he joined with others to found the Good Foods Co-op in Lexington.

“The idea of the co-op is to create a community without great extremes of inequity,” he says. “At the Fig, there’s a larger perspective that yes, we are a bookstore, but we are also a community gathering place where ideas are discussed and acted upon.”

Still, it’s been a difficult transition to full-fledged cooperative while maintaining operation of an independent bookstore and cafe. The seven co-owners of Wild Fig bought into the business monetarily or with 300 hours of sweat equity. Taylor says the goal is to bring in more co-owners, but it’s a challenge in a city without resources to support cooperative business development.

In addition, the Wild Fig is located in the North Limestone area of Lexington, which is gentrifying. The landlords of the building, according to Taylor, have contributed to redevelopment and rising prices of the area. Recently the Wild Fig proposed an affordable rent agreement, asking the landlords accept 30 percent of its gross sales, and asked for community support.

The Wild Fig has also fundraised, held events including drum circles and drag queen story times, and is selling inventory online. But if the landlord does not accept the affordable rent agreement, the business will explore opportunities to relocate to a more affordable space.

A new location could mean an expansion of the cooperative model. The Fig plans to submit a business plan to a local affiliate of the Working World, an organization that builds cooperative businesses in low-income communities. The goal is to qualify for a minimal-risk capital loan to purchase its own building. If the Wild Fig bought a historic home on the north side of the city — an area historically home to people of color — co-owners would convert the upstairs into a housing cooperative and the basement into a cooperative co-work space, according to Taylor.

She is ultimately hopeful: over the bookstore’s eight-year history, Lexington residents have consistently pulled together to save it. As for the bookstore’s current challenge transitioning to a cooperative, Taylor is already considering how this work can inspire a larger collective of cooperatives across the south. The Wild Fig partnered with Tennessee-based Highlander Center to explore opportunities for co-op incubation.

“One of the cool things about us being trailblazers,” Taylor says, “is we get to leave a legacy that will hopefully make it easier for those who come behind us.”