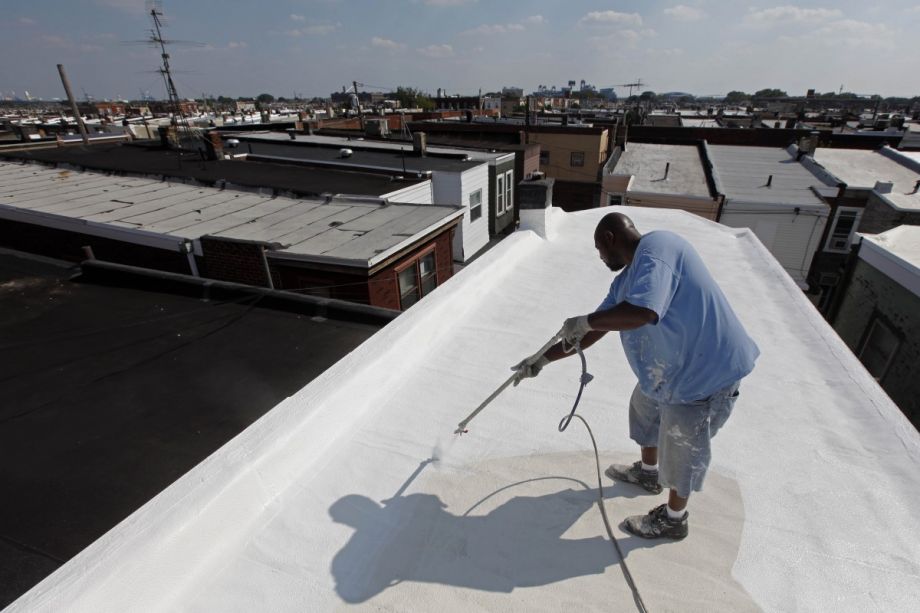 The idea of “cool” urban surfaces seems like an environmental no-brainer. Dark roofs and black pavement soak up heat; white surfaces (and other reflective pigments, collectively known as “cool”) bounce sunlight back into the atmosphere. Research suggests that they have the potential to mitigate the urban heat island effect — which could in turn reduce greenhouse gas emissions — and to directly offset global warming. One recent paper, drawing on past research, calculated that installing cool roofs throughout cities with hot summers could be “roughly equivalent to taking half of the world’s approximately 600 million cars off the road for 20 years.”

A number of cities have taken note. Last year, Baltimore and Pittsburgh launched initiatives to promote cool roofs, while New York and Toronto pressed on with their programs. Most ambitiously, Los Angeles became the first city to require that all new roofs on residential buildings be made of reflective materials.

But amid the growing enthusiasm for cool surfaces, there are stirrings of dissent. Late last year, researchers at Arizona State University published a white paper titled “Unintended Consequences: A Research Synthesis Examining the Use of Reflective Pavements to Mitigate the Urban Heat Island Effect.” The paper reviewed the literature on cool roofs and pavements, and argued that their widespread adoption could have all sorts of unfortunate repercussions, from driving up winter heating bills to reducing precipitation.

“With progress there’s always someone who’s getting left behind,” said Kurt Shickman, executive director of the Global Cool Cities Alliance, who issued a detailed “fact check,” rebutting many of the claims in the white paper. (The ASU group recently replied to the fact check.)

Is this a manufactured controversy — yet another example of corporate interests throwing money around to distort the facts? Is it, at bottom, just a sign that cool surfaces have arrived? In part, yes to both questions. But the white paper did draw on real research suggesting that the story is a bit more complicated than we might suspect. And the disagreements encapsulate larger debates about how to approach the daunting problem of climate change.

In the past few years, studies using various modeling techniques have projected different scenarios that could result from large-scale deployment of cool roofs. Most confirm the potential benefits, but several raise questions about possible unintended consequences. Roofs, it turns out, can indeed influence not only temperature but also precipitation by affecting the amount of water that evaporates into the atmosphere. One recent paper, by a different team at Arizona State University, found that universal cool roof deployment could reduce summer rainfall in the southeastern United States, leading to potential water scarcity. On the whole, this paper sounded an optimistic note, arguing that wise roof choices could “offset a significant percentage of future greenhouse warming over large scales.” It stressed, however, the importance of considering local context rather than “one-size-fits-all” solutions. In some regions, for example, green roofs or a hypothetical cool-green hybrid might be more appropriate.

“Up until very recently, it seemed as if cool roofs were the answer for everyone,” said Matei Georgescu, ASU assistant professor of geographical sciences and urban planning, who co-authored the paper. “And they might be. But we are now aware of the various layers of tradeoffs.”

One study even found that cool roofs could backfire in the effort to mitigate global warming. A 2011 paper co-authored by Stanford professor Mark Jacobson, cited in “Unintended Consequences,” indicated that universal white roofs would have local cooling effects, but through complex mechanisms — the roofs’ influence on air stabilization and cloud formation — could slightly warm overall global temperatures.

All of these studies have different strengths and weaknesses, and it’s difficult to draw confident conclusions at this point. Perhaps what’s most telling is how these debates fit into larger discussions about climate change. We know that the fossil fuel industry and other business interests play up uncertainty about the risks of climate change in order to stave off threats to their livelihood. In this case, we see a new twist on a familiar tactic: The pavement industry is not denying climate change but is looking at one specific proposed solution and exploiting some legitimate uncertainty about its effects.

The debate also embodies conflict within the climate change movement about priorities and tactics. Some see schemes to offset warming as a distraction from the urgency of stemming emissions, possibly even an excuse for inaction. They worry that if people think we can just paint our roofs and parking lots white, we won’t have to stop guzzling gas.

As Mark Jacobson told me, “The concept of trying to switch to white roofs is not a solution to anything. All you’re doing is masking the problem. I think it’s kind of a bad policy … Better to spend money on things that actually reduce emissions.”

But according to another way of thinking, the focus on emissions is too narrow. Some argue for what might be called benign geo-engineering: small-scale, distributed projects that can sequester carbon in soil or reflect heat into the atmosphere.

To me, the available evidence suggests that cool surfaces (and especially cool roofs, which have received the most scrutiny) are one promising tool in the green arsenal. But the debate underscores the complexity of climatic processes; the importance of considering as many factors as possible, including local context; and finally, the need to act on knowledge that is always evolving and imperfect.