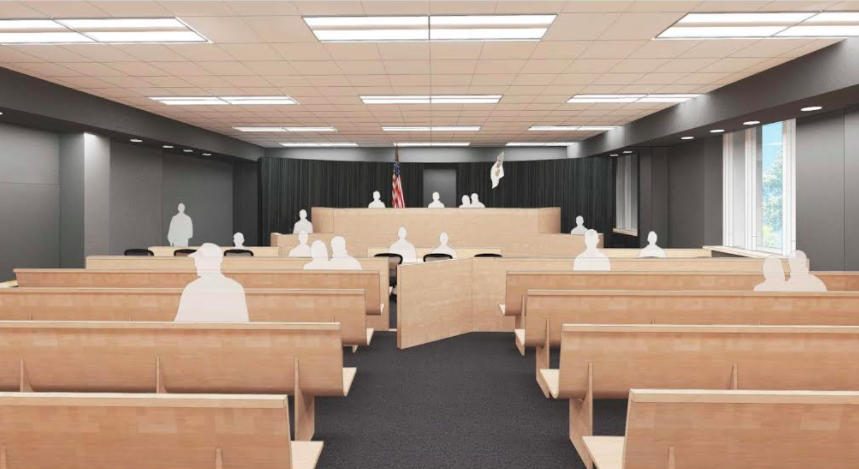 Cook County bond court in Chicago is loud. Judges are hard to hear from the bench in the corner of the room, and people entirely unrelated to procedures have to walk through the room to access other parts of the building. With judges ruling on up to 120 cases in two hours, averaging just 37 seconds per detainee, it’s chaotic and confusing for families, who may not understand whether their loved ones will be released on bond or not. In those 37 seconds, a judge could set a $1,000 bond that ensures a low-income, nonviolent offender remains in jail, sometimes for nearly a decade, simply because they can’t pay.

The bond court is, in some ways, the front door to the criminal justice system — and judges, attorneys and elected officials say the courtroom design itself may be negatively impacting how detainees are perceived and inhibiting their right to a fair hearing. The pro bono arm of the international firm CannonDesign, working with the Civic Consulting Alliance, spent several months observing Cook County’s bond court and interviewing 36 stakeholders — from justices to detainees — to come up with a new design that would better serve all parties. With the final details being worked out now, an overhaul of the courtroom should start in 2017.

“Design is always an influencer of how we experience spaces, and especially in those public and civic institutions, not always for the best,” says Tim Swanson, Chicago office leader of CannonDesign.

In Cook County, bond court is held in a traditional courtroom, with rows of benches facing forward though the judge’s bench is on a diagonal. There’s also a jury box, even though there’s no jury in bond hearings. “It served no purpose in the room but it was a very prominent feature in the room,” says Delia Conache, project designer. The jury box became a holding area for the next 10 defendants waiting their turn.

“For lack of a better phrasing it is a cattle call in the worst imaginable way possible,” says Swanson. Conache says she was “pretty shocked” by her first day in bond court. “Just the speed of it, I had no idea who was who in the room, I was very confused by who the parties were.”

And there are quite a few parties: the detainee, the public, the judge, the public defender, the state’s attorney, the sheriff, interpreters, clerks and people from pretrial services. Though defendants are only before a judge for a few minutes or less, pretrial attorneys spend the day meeting with the defendant and public defender to determine the level of risk associated with releasing them on bond. Pretrial attorneys help evaluate defendants’ mental stability and mental health needs, and calculate risk to the public upon release and the possibility that they’ll flee. They play an important role, but in the current design, they’re off to the side. 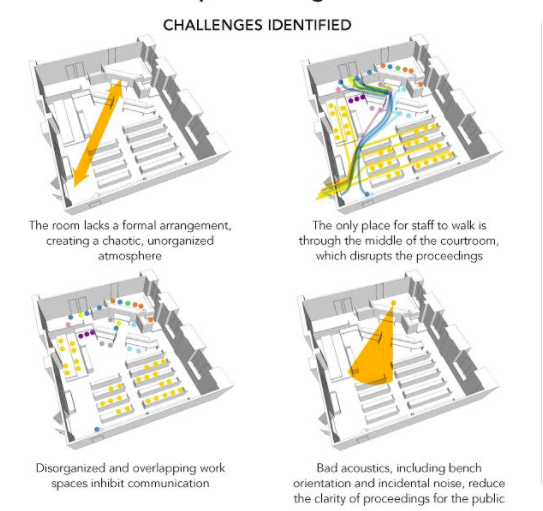 The redesign puts the judge front and center, facing three separate tables intended to clearly delineate the three separate and equal roles of the pretrial services, public defender and state’s attorney. Behind them are benches for the public, facing the proceedings head on. The layout also allows for multiple paths through the room, so that not everyone needs to pass through the center, as in the current design.

That head-on design makes the proceedings easier to hear, as do the softer materials CannonDesign incorporated into the room. Carpet and acoustic panels will absorb incidental noise. The proposal also includes a curved wall behind the judge’s bench intended to direct sound toward the back of the room, but that element of the design is still being worked out with the sheriff. The wall also obscures the door to the sheriff’s office and to the lock-up.

“What became really fascinating through this process from our view was that before we even got to design we had to realize all of the different voices that had a say in this and how to align them all,” says Swanson.

For the sheriff, visibility and ability to control the room were the key components. Pretrial services and the public defender wanted to be sure anyone who walked into that courtroom did so on equal footing, to demonstrate the intent of a fair, not predetermined, trial. Judges were in two camps: whether to be on equal footing with the people, or slightly raised, as is traditional, because it helps people in the back of the room hear the proceedings too.

Swanson and Conache hope the new layout will make roles in the courtroom clearer, but they also helped design infographic panels outside the courtroom to help explain what’s going on. “The space had to represent the process, and everyone walking in had to come in better informed,” says Swanson, “so that when you walked into the room it was not only a better place to hear things, but you now knew what to expect.”

The panels will be installed in the hallway outside the courtroom. Cannon also helped design a set of steps to transition to LED screens with the same information in the future. Similarly, the courtroom redesign includes rolling carts for paperwork, and a plan to digitize the filing system later on. Construction will begin in 2017 and last six to eight weeks.

In the redesign process, Conache and her team also saw the stages a detainee passes through before arriving in bond court. By the time people come in front of a judge, it’s usually been at least a day since their arrest. Jails, of course, aren’t meant to be prisons. They’re intended to hold people only for the short length of time it should take to go to trial. But hundreds of people are held for years in Cook County’s jails, thousands across the nation. Since the decision is made in bond court whether to deny bail, to grant it or to release on electronic monitoring, “the bond court has a direct correlation to that number,” says Conache.