The Best Conversation About Public Monuments Is Happening in Philly 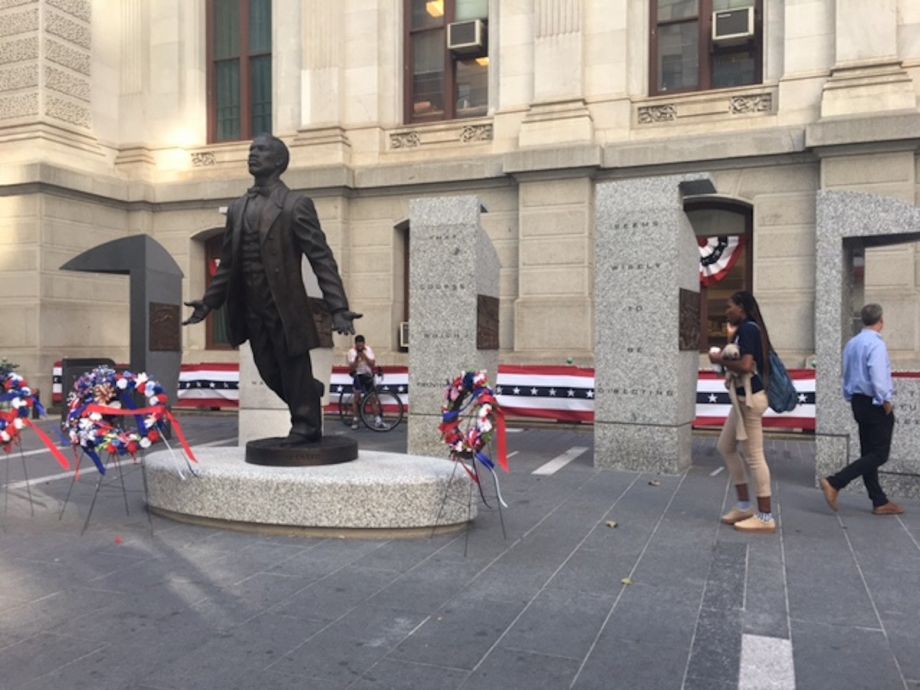 “We sit on an old mat weaving a new one,” said Alyn Waller, the senior pastor at Enon Tabernacle Baptist Church, moments before the unveiling of a monument to 19th-century civil rights activist Octavius V. Catto in Philadelphia on Tuesday morning.

People crowded around the south side of City Hall. The gospel choir of the African Episcopal Church of Saint Thomas sang. Members of the Octavius V. Catto Lodge of the Improved Benevolent Protective Order of Elks of the World stood by in their fezes. Across the street, uniformed waiters leaned against the second-floor windows of the Ritz-Carlton hotel, looking on. It was an out-and-out urban pageant, and it couldn’t have been better timed.

In the last year, cities across the U.S. have debated public monuments and the political forces they represent. In May, after questions were raised about when and how public monuments to Confederate leaders were being removed, New Orleans Mayor Mitch Landrieu gave a rousing speech in defense of their removal, noting that many of the statues “celebrate a fictional, sanitized Confederacy, ignoring the death, ignoring the enslavement and the terror that it actually stood for.” A crowd in Durham, North Carolina, tore down a bronze Confederate statue a few days after a white nationalist rally in Charlottesville, Virginia, ended in the death of a counter-protester. A few days after that, Baltimore City Council voted to remove Confederate monuments, and the city had them taken down immediately, overnight.

Philadelphia was never part of the Confederacy, but racism and bigotry are woven into its history. Recently, City Councilwoman Helen Gym took the lead in an effort to remove a statue of former Mayor Frank Rizzo that stands on the steps of the Municipal Services Building just north of City Hall. As a police officer and then commissioner in the 1950s and ’60s, Rizzo earned a reputation as a tough-guy supercop with raids on gay clubs and a violent crackdown on students demonstrating for black history to be incorporated into the public school curriculum.

The city is asking residents to weigh in on what should be done with the Rizzo statue, and Mayor Jim Kenney has said the Art Commission will decide on its future.

Hank Willis Thomas' “All Power to All People”

A current public art project called Monument Lab is organized around the question, “What is an appropriate monument for the current city of Philadelphia?” The project involves the temporary placement of monuments by 20 artists at various public locations across the city. One of the first, unveiled two weeks ago by New York-based artist Hank Willis Thomas, depicts a Black Power fist rising from the handle of an Afro pick. Placed just a few feet away from the controversial statue of Rizzo — whose police force notoriously strip-searched a group of Black Panthers in front of newspaper cameras in 1970 — the sculpture, called “All Power to All People,” quickly grabbed attention. In the courtyard of City Hall, an installment called “Two Me” invites passersby to climb onto one of two fully accessible pedestals labeled “Me.” In West Philly’s Malcolm X Park, DJ King Britt and artist Joshua Mays will create a performance based on archives and sound samples gathered over the summer in cooperation with Mural Arts Philadelphia.

“We are clearly at a moment of reckoning when it comes to our monuments,” Monument Lab curator Paul Farber told the website Hidden City Philadelphia earlier this month. “This open and critical conversation is built on decades of groundwork by artists, activists, scholars and students who have questioned the status quo of public memory.”

While the Octavius V. Catto memorial was not created as part of Monument Lab, it makes a substantial contribution to the conversation. Philadelphia has more public art than any other city in the U.S., and yet until Tuesday, there was no public statue of a sole black person on any piece of public land in the city. Catto was a civil rights activist who helped to desegregate trolley cars, a baseball player, and the 1858 class valedictorian at the Institute for Colored Youth, which later became Cheyney University. He was shot to death at age 32 on Election Day in 1871, one year after the ratification of the 15th Amendment, which gave black men the legal right to vote. His killer was a white Irish Catholic.

Kenney first proposed the creation of a Catto memorial when he was a city councilman, in 2003. The mayor is Irish Catholic and has said that his involvement in the effort to elevate Catto’s story is an attempt to address the injustice of his murder.

“Octavius Catto was a true American hero,” Kenney said at the unveiling ceremony on Tuesday. “Like many other unknown and nameless black American heroes, he should be revered, honored and recognized. Their lives and accomplishments should be part of the daily curriculum in our schools, not just during the shortest month of the year. … My hope is that someday every child in Philadelphia and every child in America will know as much about Octavius Catto as they do about George Washington, Benjamin Franklin and Dr. Martin Luther King Jr.”

The statue of Catto was created by sculptor Branly Cadet. A series of pillars behind it represent an upturned trolley car. In front there’s a ballot box. Catto himself is depicted midstride, his chest thrust forward, confident and vulnerable.

After the discussion of Confederate statue removal reached a fever pitch this summer, some writers worried that a reconsideration of our public statuary would leave us with no public monuments, considering most of the founding fathers owned slaves or nursed racist beliefs. President Donald Trump himself wanted to know, “Where does it stop?” What history shows is that it never stops anywhere, and Philadelphians are now grappling with a much better question: Where does it go?

Correction: This article was updated to reflect that Malcolm X Park is in West Philadelphia.