Convention Cities Highlight Economic Challenges the Next President Will Face 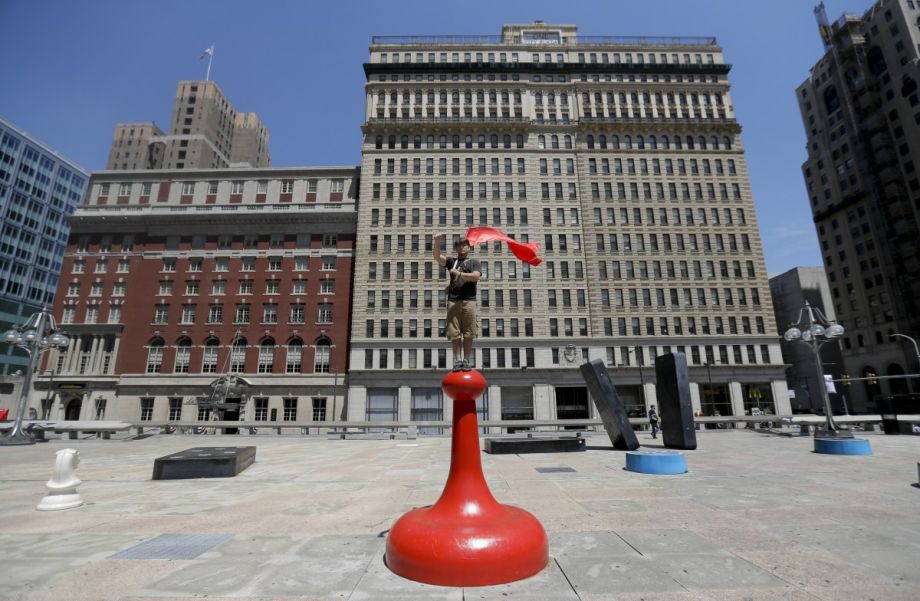 A demonstrator waves a flag during a protest near City Hall in Philadelphia Wednesday during the third day of the DNC. (AP Photo/Matt Slocum)

The location of the Republican and Democratic party conventions always draws attention to the host cities, but this year there has been very little discussion of the serious economic and fiscal challenges that confront both Cleveland and Philadelphia. It’s time to take a look under the hood.

An analysis of the Lincoln Institute’s Fiscally Standardized Cities database reveals that both cities are struggling with structural issues that in fiscal terms keep them on the brink. The database allows comparison of local government finances for 150 of the largest U.S. cities across more than 120 categories of revenues, expenditures, debts and assets.

Like many other post-industrial cities, Cleveland and Philadelphia are grappling with population loss, declining employment, particularly in manufacturing, highly fragmented metropolitan areas, the lingering effects of the Great Recession, and the boom and bust of the housing market.

Before a detailed look at Cleveland and Philadelphia, some general observations about all the cities in the database:

Real per capita revenues were 10.7 percent lower in 2013 than in 2007. The fiscal problems faced by the city were exacerbated by exceptionally large cuts in state aid. 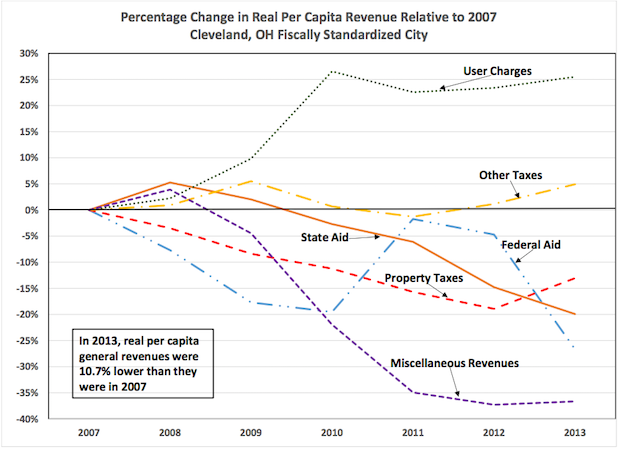 Adjusting for inflation and population change, most categories of spending were lower in 2013 than in 2007, just prior to the Great Recession. 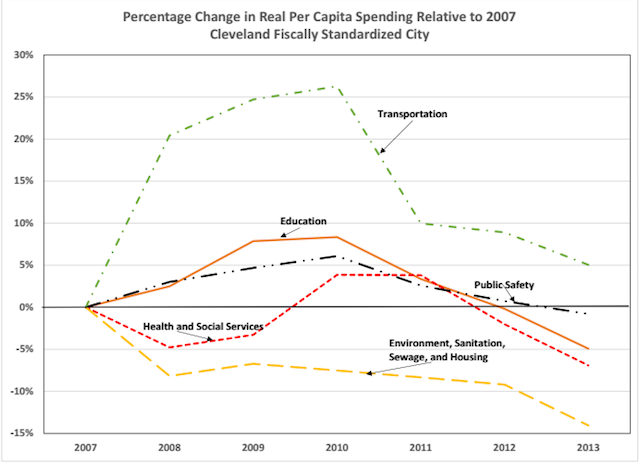 Philadelphia
Although Philadelphia’s economy is stronger than Cleveland’s, the city faces substantial economic and fiscal challenges. More than 17 percent of those over 25 have less than a high school degree. The 2014 poverty rate was 21 percent.

Although property tax revenues did not fall precipitously, both state and federal aid were lower in 2013 than in 2007. 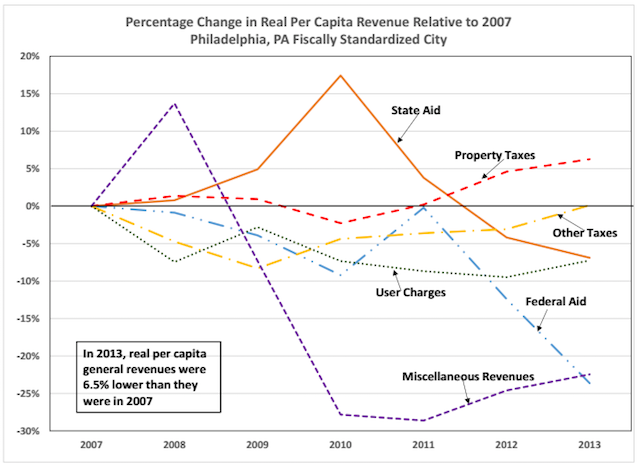 Spending on health and social services and on public safety were both substantially reduced in Philadelphia. 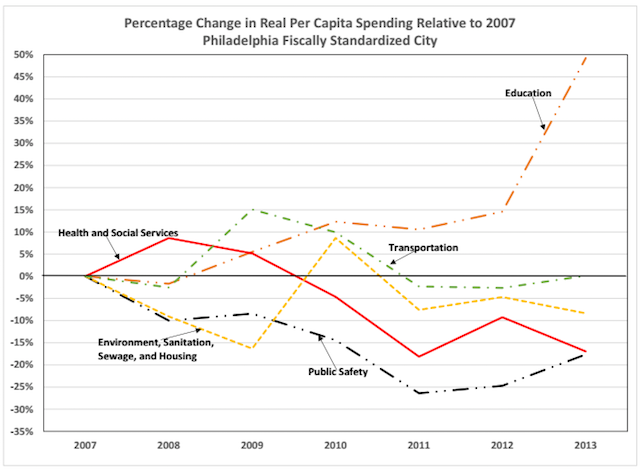 Cleveland & Philadelphia
Looking at the two cities side by side and compared to national averages, the picture is brighter in Philadelphia than in Cleveland. Housing prices in Cleveland are low and rose very modestly during the housing boom; however, starting in 2005, they fell until 2012. Recent price increases have been very modest. 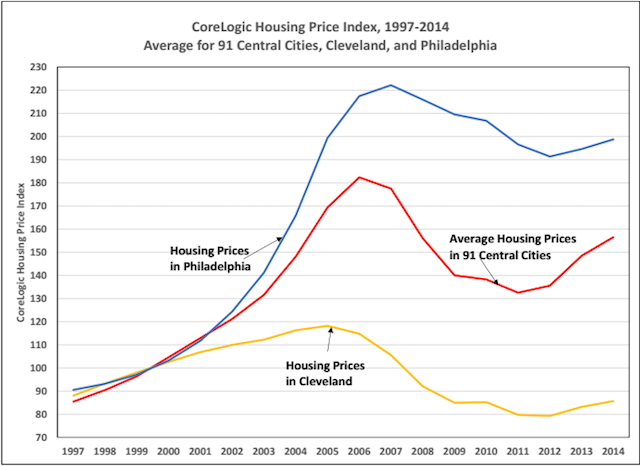 The trends are similar in terms of the housing foreclosure rate, which has consistently been above the national average in Cleveland. The rate rose very dramatically, remaining at elevated levels until 2011, before declining again. The rate is still substantially above the average for large central cities. 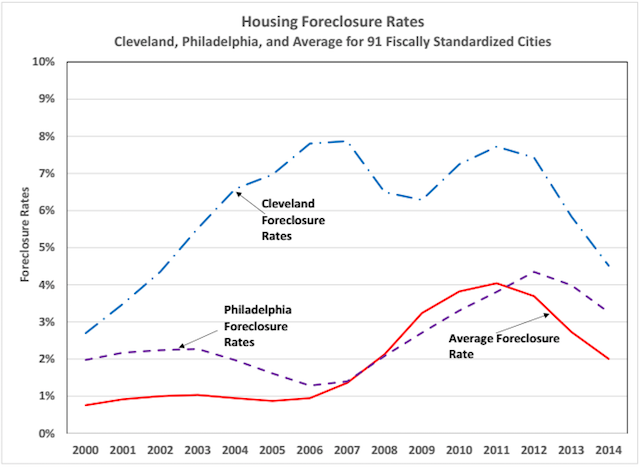 Cleveland and Philadelphia, buffeted by long-run economic decline and the bursting of the housing bubble, have also suffered from federal policies. Since the end of the stimulus funding, budget choices at the federal level, rather than helping cities deal with rising unmet needs and falling local revenues, have instead made their problems worse. It shouldn’t be too much to ask both political parties and their candidates to give serious consideration to the problems faced by the nation’s central cities.

Andrew Reschovsky is a research fellow at the Lincoln Institute of Land Policy, a think tank based in Cambridge, Massachusetts.