Scientists Trace Infection’s Spread Through a U.S. City – Next City 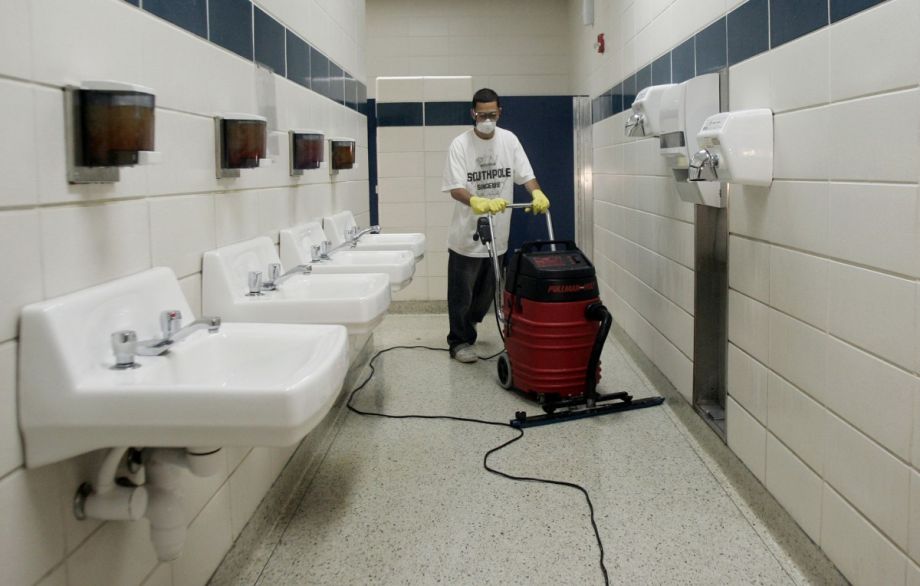 A Chicago high school lav got this scrubbing in 2007, when the city was experiencing a MRSA epidemic. (AP Photo/Jerry Lai)

In the latter half of 2014, Americans were transfixed by a handful of Ebola cases in the country. Meanwhile, another disease generates much less hype but, on these shores, does much more damage. Sometimes called a “silent epidemic,” Meticillin-resistant Staphylococcus aureus (MRSA) has been spreading through U.S. cities at a clip the Ebola virus could never hope to match.

MRSA is typically thought of as a scourge of hospitals. In recent years, however, U.S. hospitals have managed to reduce rates of the infection; according to the CDC, serious hospital-acquired infections fell by more than 50 percent between 2005 and 2011. But another type of the disease, known as community-associated MRSA, has been circulating beyond the hospital walls. It’s become a major public health problem.

MRSA often manifests as a mild skin infection, but its more severe forms can lead to pneumonia, comas and death. (For a vivid image of how serious a skin abscess can get, look here. Or, if you’re squeamish, definitely don’t.) According to a USA Today investigation, MRSA sickens hundreds of thousands of otherwise healthy Americans every year — many more than the official government statistics catch.

While hospitals can set policies to fight the disease — from hand hygiene to isolation of patients — what happens when it spreads throughout the unruly environment of an entire city?

To answer this question, scientists at Argonne National Laboratory and the University of Chicago studied data from 2001 to 2010, when Chicago was going through a CA-MRSA epidemic. They examined the day-to-day patterns of about three million (anonymous) people, moving to and from 1.2 million locations, such as households, schools and workplaces. (They used aggregate data from the census and time use surveys, which gave them what’s called a “synthetic population.” That is, they did not have information on real individuals, but rather on “agents,” or avatars of actual Chicago residents.)

“The whole point of our investigation and project was to model the process of how CA-MRSA could possibly have developed and taken over,” says Charles Macal, an Argonne engineer and the paper’s lead author. “What were the sources? What were the dynamics?” He adds, “It’s not necessarily just an urban disease, but it’s affecting most urban areas.”

Similar models have been formulated for diseases such as malaria, HIV/AIDS, tuberculosis and, most frequently, influenza. But, Macal says, “I like to think of it as unique, because it’s so focused on cities and the fine-grained space and time.” What’s more, each disease spreads in a different way. MRSA is transmitted through skin-to-skin contact, as well as shared items such as towels and razors, so the researchers included jails and gyms in the model.

What makes this disease particularly challenging is that many people are “colonized” with the bacteria but not infected. Like Typhoid Mary, a carrier may experience no symptoms but can pass the bacteria on to others, who may be more vulnerable to infection. Carriers are also at greater risk of becoming infected themselves, as when an abrasion allows the bacteria to enter the blood.

Based on national and local data, the researchers estimated the number of colonized people in Chicago. They also made assumptions about the amount of physical contact in various settings, as well as the likelihood of cuts, injuries and abrasions. Sports, for example, are considered high-risk.

In Chicago, the disease originated in inner-city neighborhoods (perhaps because of closer living quarters), and spread in a more diffuse pattern to other areas of the city. Over the course of the decade, each person had an average of 39 estimated “contact events” per day. There were about 116,000 new infections and over two million colonizations. (This does not mean that two million people were colonized; in some cases the same person may have been colonized multiple times.) Of the new colonizations, 98.6 percent resulted from contact with someone who was merely colonized, not infected. And the authors determined that the most common site of transmission was households — responsible for 65 percent of new colonizations.

The authors argue for a major overhaul in urban health policy to address the disease. As of now, efforts focus on treating infections and on screening in healthcare settings. But given the spread of CA-MRSA in our daily habitats, more expansive measures may be needed. Because colonizations are such a risk factor for infection, Macal believes we need to shift our attention to that early phase.

One possibility is to identify colonized people by swabbing inside their noses and try to de-colonize them with a regimen of antibiotic ointment and antibacterial soap. This approach has been implemented successfully in the Netherlands. The question is how to prioritize which people to test outside healthcare facilities (while avoiding the overuse of antibiotics and antibacterials).

“One has to weigh what’s practical,” says Diane Lauderdale, a professor at the University of Chicago who is also involved in the research. “If you screened everyone in the country and treated them, you would have a big impact. But that’s not feasible.” There have also been cases in which infections seem to occur in the absence of nasal colonization, which complicates matters.

The authors are currently working on follow-up research that would plug different interventions into the model, such as testing and de-colonizing all members of an infected patient’s household. The model certainly has limitations — it relies on assumptions (about the amount of physical contact, for instance) that are impossible to verify. But if the assumptions are reasonable, this method can provide an otherwise unavailable glimpse of how hypothetical scenarios might play out.

“You can test at a system level an intervention that you really can’t do practically,” says Lauderdale. “You would need to in effect randomize whole cities … and that would be absolutely impossible.”