Connecticut Is Considering Statewide Zoning Reform. This Map May Be Why – Next City 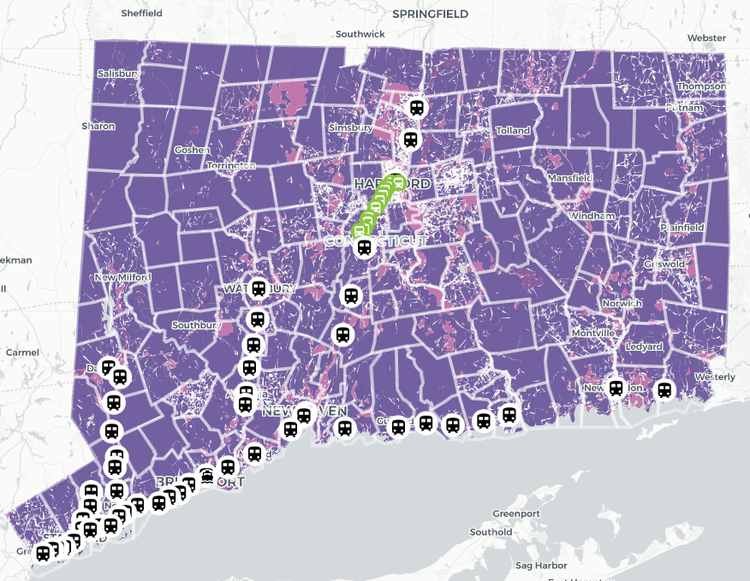 A first-in-the-nation interactive map maps every zoning rule in the entire state of Connecticut, an undertaking that required a team to read, analyze and map 32,378 pages of regulations. This screenshot shows transit stations overlaid over the zoning map (purple is single-family zoning). (Screenshot courtesy Desegregate CT)

The bill is thanks to one organization: Desegregate CT, a coalition of nonprofits and community members that formed in the wake of this summer’s protest movement to desegregate the state. The founder is Sara Bronin, a Hartford-based architect, attorney, professor and policymaker who saw, throughout her work, how zoning upheld segregated land use, with one-family lots making up wealthy, white neighborhoods and denser housing concentrated in lower-income urban areas.

“We started public conversations about what zoning could do for our state,” she notes. “One of the questions we constantly got asked is, what is zoning like in our town?” The result, which contributed to organizing around Senate Bill 1024 and will remain a crucial tool for Desegregate CT, is the team’s Zoning Atlas. It’s a first-in-the-nation interactive map showing how all 2,620 zoning districts and two subdivision districts in Connecticut treat housing — a massive undertaking that required a collaborative team to read, analyze and map 32,378 pages of regulations.

“The Zoning Atlas is intended to be a resource for people to understand how their community is zoned and how it compares with other communities,” Bronin says, “and use that information to help promote change both within their communities and across the state.”

The first partnership to make the Zoning Atlas a reality was with a research team of about two dozen college, law students, and planning professionals. Last fall, the group began poring through all the available zoning codes and reaching out to town planners to understand important characteristics of each local code. They zeroed in on characteristics like single family vs. multi-family zoning, parking requirements and affordable housing code definitions and availability. They tracked a total of 68 characteristics in each city.

“The team’s work really formed the core of the preliminary analysis,” Bronin explained in a Desegregate CT webinar about the creation of the atlas. “They logged all the districts and really started trying to categorize them.” That process revealed missing regulations and districts, so the team began outreach with town planners to identify them.

The next step was mapping, which happened in partnership with CT Data Collaborative. The team requested maps from all 169 towns, a process that lasted roughly four months. “We had a huge spreadsheet with the data and a collection of GIS data,” explains Ilya Ilyankou, a member of the collaborative. “Our job was to marry those two pieces together.”

Some maps turned over by town planners were PDFs or hand-drawn — meaning the team had to digitize them themselves, knitting them together with the surrounding zoning districts. There were other challenges in “putting the pieces together,” as the team thought of it. They had to map overlay zoning — essentially a special zoning district placed over the existing zoning. They also found that many towns had land owned by the state or federal government, out of the town’s jurisdiction. The team marked that distinctly in the map.

Overall, the goal was to create a map that felt accessible. “We knew the message [of Desegregate CT],” Ilyankou says. “It was up to us to build the tool to echo that message.”

The Zoning Atlas launched in January and was dubbed “likely to be one of the most important tools for planning our communities our state has ever seen” by Rebecca Augur, president of the Connecticut Chapter of the American Planning Association.

The map clearly depicts how local zoning regulations allow or restrict different housing types across the state, with data viewable on a town-by-town basis or at a regional and statewide level. “Given the number of different zoning districts across the state (more than 2,600) and the lack of a central clearinghouse for local zoning information,” Augur wrote, “the new Atlas provides unique insights for anyone interested in housing policy and in creating more sustainable and equitable communities.”

While the atlas was funded as a research project it also became an effective organizing tool, according to Eleni Neyland, the organization’s political director. “Zoning is not really a household topic, it’s not something that’s particularly well known,” she says. “The atlas really helps people visualize what zoning reform could do in your community.”

In a February virtual meeting, for example, Desegregate CT team members used the map to zero in on areas within a half-mile of train and bus stops to talk about transit-oriented development. “We can say — the thing your town would be most impacted by is that there’s no development near this train station, and if it gently increases density here it will make your town more accessible and housing more environmentally sustainable,” Neyland notes. This month, the atlas was used in meetings with social justice groups, political organizations and student groups interested in joining Desegregate CT’s policial efforts.

The map is also a straightforward tool to address fears and outcry that can come from wealthier communities in response to upzoning. “They can visualize that zoning reform isn’t necessarily going to do what folks in opposition are saying it will do,” says Neyland.

In just a few short months the team has used the Atlas to build momentum and support for Senate Bill 1024, which the Planning and Development Committee introduced earlier this month. The bill includes all the reforms DesegregateCT has advocated for since its inception last summer, including support for accessory dwelling units, reduced parking minimums, and more transit-oriented development. They also propose defining the word “character” to mean physical site characteristics and architectural context — ensuring the word “is not used against people, but used for the better delineation of the physical nature of our places.”

During this week’s 24-hour hearing, 340 speakers registered and about 80 spoke. Rougly 70 percent of those who testified endorsed the bill, according to Desegregate CT. Between those who testified during the hearing and those who submitted written testimony, supporters of the bill numbered well into the hundreds.

The map will be further used to help residents visualize what these baseline reforms (if enacted) will mean for their community — and what could further be done. “Maybe a community won’t be impacted by transit-oriented development, but they’ll see the town requires three parking spaces for a studio bedroom, or ADUs [accessory dwelling units] are really restricted and people don’t have the opportunity to build them,” Neyland says.

Beyond an advocacy tool, Desegregate CT has received requests from researchers to delve into the data behind the map. “We’re looking forward to exploring how much information that these zoning maps can reveal,” says Bronin. “It’s not just land use — it’s about the very economic, social and political structures of our society.”