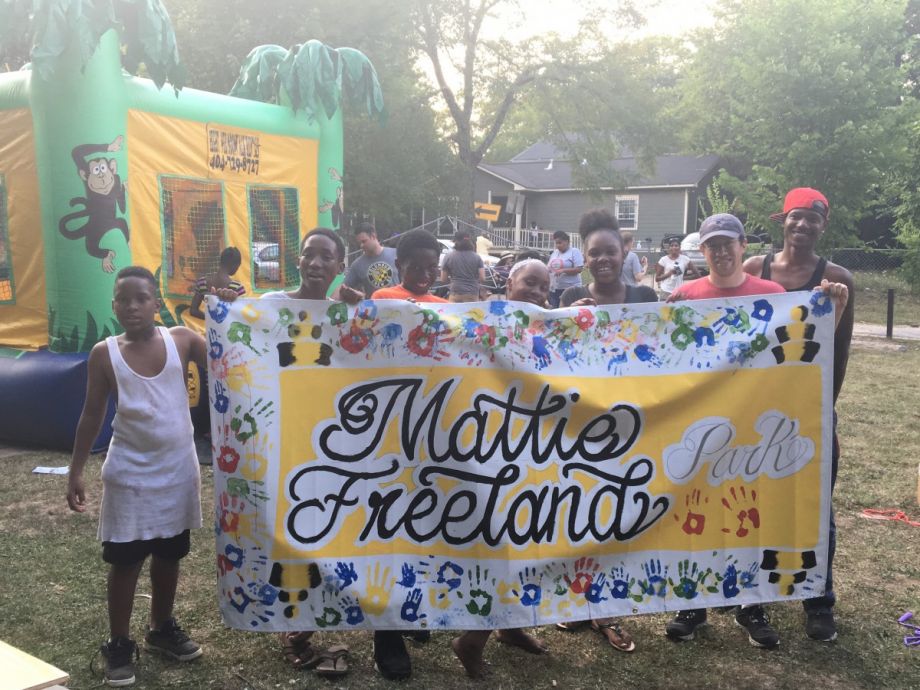 Mattie Freeland never owned her home in Atlanta’s English Avenue. She paid $25 a month in rent there for decades, even as her family urged her to move out of a neighborhood they considered increasingly unsafe and blighted. Having been gutted by the crack epidemic of the 1980s, English Avenue suffered from high levels of crime. But Miss Mattie, as she was known, anchored her corner of the neighborhood. She was like everyone’s grandmother; her home was open to anyone who needed a dinner roll, a bottle of water, a place to sleep. Now, the people she welcomed are working to turn that house into a community center, expanding on a park already named in her honor, and even though Freeland died in 2008, she is still inspiring the neighborhood.

Right after she died, a vacant lot across from her house, owned by the New Life Covenant Church, was turned into a community garden as a tribute to her. The next year, the owner of an adjacent vacant lot let the church and its growing band of volunteers and partners sod his field and install playground equipment and raised beds there. In 2010, a nonprofit planted 45 trees, and neighborhood children came to the green space to learn about gardening.

From there, the grants and partnerships just kept coming. “Mattie Freeland Park” won a grant to undergo a “park visioning” process, which brought together community members to talk about what they wanted to add.

Residents “gave us really good input and really helped change the game in terms of the way that we thought of that space and the way that we were programming the uses,” says Stephen Causby, an English Avenue resident and a lead park advocate. New Life Covenant Church’s original vision — and admittedly, Causby’s own — included more vegetable growing, but it turned out the neighborhood wasn’t that interested. Residents wanted a place to host cookouts, a shady place for older residents to sit out and enjoy, a few raised beds with flowers.

Now, the community is hoping to raise funds for the Mattie Freeland Community House, to turn Freeland’s home into a gathering place and centerpiece of the expanding neighborhood green space.

They’ve caught the attention of the city, the parks department and The Arthur M. Blank Family Foundation. In 2013, as part of a deal authorizing $200 million in public bonds to build a new stadium, a community benefits agreement was struck that calls for the city and the foundation to each invest $15 million in English Avenue and three surrounding neighborhoods on the city’s Westside. Former stadium deals have gutted those neighborhoods, which rarely saw any of the promised economic benefit in return. (The Arthur M. Blank Family Foundation is an arm of the Arthur Blank Family of Businesses, begun by the co-founder of Home Depot, and owner of the Atlanta Falcons, who will play in the new stadium.)

After a lot of effort to track down title and ownership of the house, Invest Atlanta, the city’s economic development authority, bought the home. They will work with New Life Covenant Church and its nonprofit to turn it into a community center. The joint venture building the new stadium has already agreed to do the renovation work. In December 2015, the city agreed to acquire the park as official Atlanta park land; it will be the second neighborhood park in English Avenue. All this summer, a grant from the Blank Foundation is funding support from the Project for Public Spaces to host events there.

Meanwhile, Causby recently managed to contact Freeland’s granddaughter, Mironda Williams. She lives in an Atlanta suburb but spent many days at her grandmother’s as a child and later, as a hungry med school student. When Causby brought her to see the green space, she was overwhelmed. That the community, even eight years after her passing, wanted to created a space in her honor, Williams says, “what better, because that’s what it was essentially always when she was there.”