Another City Plans Overnight Revamp of Its Entire Bus System 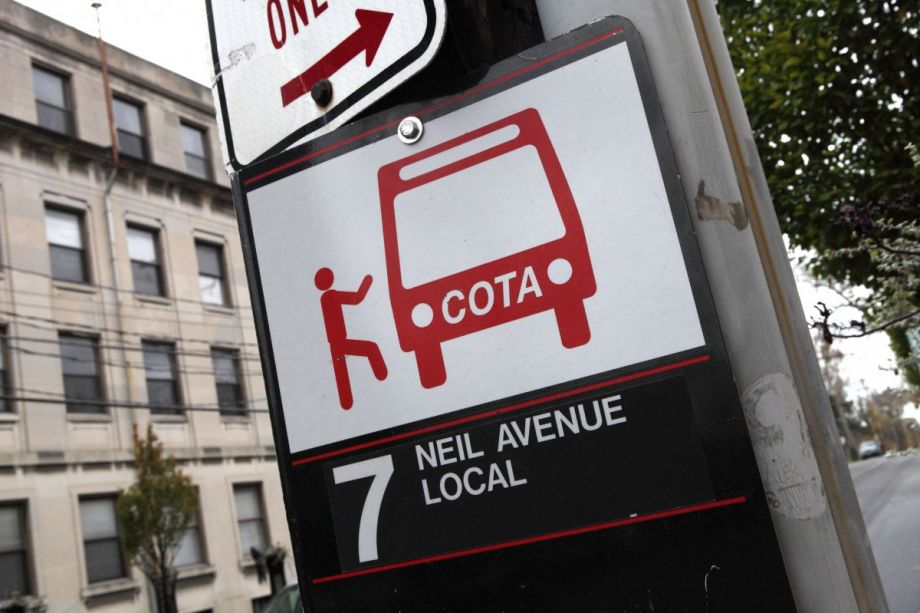 Subject to change: a stop on COTA's current 7 line (Photo by Sam Howzit, via Flickr)

A few years ago, when the CEO of the Central Ohio Transit Authority (COTA) compared maps of Columbus’ original bus system from the 1970s to the system today, he noticed something striking. “Not much had changed in the bus routes, while a lot had changed in the Columbus Ohio region,” says Josh Sikich, COTA’s transit system redesign project manager.

On May 1, Columbus will become the next U.S. city to enact an overnight bus overhaul, a la Houston, Anchorage, Jacksonville and others. Like Houston, as Columbus’ population has grown, the single, central employment district has fractured into a number of employment nodes not currently well-served by public transit. Like Anchorage, routes winding through residential neighborhoods are costing time and money without contributing much to service. (Also like both cities: Jarrett Walker and Associates consulted on the redesign.)

With the route switch-up, the number of high-frequency bus routes will double, buses will run the same schedules seven days a week, and the number of jobs within a quarter mile of a high frequency route will increase by 70 percent — all while reducing the number of buses on the road from about 360 to 314.

“We’re creating a more efficient use of our resources,” says Mike Bradley, COTA’s vice president of planning and service development.

Currently, Columbus’ seven high-frequency routes — on which buses arrive every 15 minutes or less — comprise over 40 percent of total system ridership. Over the years, COTA has bulked up service on those routes to respond to the demand, but they’re still a hub-and-spoke system, requiring riders from outlying neighborhoods to bus downtown in order to reach other outlying neighborhoods.

After the redesign, 15 routes will feature high frequency service, and several will connect outlying neighborhoods directly.

“It will be a huge improvement for a lot of people, not having to come downtown, having this backbone of 15-minutes or better service,” says Sikich. The buildout will increase the number of residents within a quarter mile of a high-frequency route by 90 percent. The number of jobs within walking distance of such a route will increase from about 155,000 to 265,000.

“If you’re a transit planner, the number one thing you can do to increase ridership is through more frequent service,” says Bradley. In the first three to four months, while riders get used to the change, COTA expects ridership to decrease, but they are hoping to see a 10 percent increase by the end of the first two years. If it works, it will reverse a three-year decline. According to the Columbus Dispatch, annual ridership dropped from 19.3 million in 2014 to 18.8 million in 2016.

To speed up the adjustment period, COTA has been engaged in a public education campaign. Informational signs are going up at every stop. Starting six weeks before implementation and running until mid-May, street teams will visit all of the system’s highest ridership stops to talk to people about the changes to their routes one-on-one. Call center staff is being beefed up, and on May 1 itself, COTA staff will be a big presence on the sidewalks.

“We don’t want [riders] to fall in the habit of still going downtown and coming back out, we want them to know in some cases they can cut their trip in half,” says Sikich. The education campaign follows several years of public outreach to get input on the redesign.

Inspired by Houston, Columbus will already have installed new route signage prior to May 1, and will simply send out teams to remove fabric hoods the night of the rollout. “We looked at a bunch of systems and saw the way that pulling the bandage off all at once seemed to work for them,” says Bradley. Several COTA staff went down to Houston to watch their redesign unveiling in action, including Public and Media Relations Manager Lisa Myers.

“Some people were confused, some people are excited,” she says of the rollout. “I think you see the range of emotions, because transit can be such a personal experience for people especially if they’re transit dependent or transit reliant.”

Some residents will need to walk slightly further to reach bus stops after the redesign removes the loops buses sometimes take on residential streets. Eliminating those deviations is part of how COTA will increase coverage while reducing buses on the street. Seven-day-a-week service will also represent a major change: starting May 1, riders will be able to catch the same bus at the same time every day of the week.

With estimates that Central Ohio could grow by an additional 500,000 to 1 million people by 2050, COTA wants to be prepared with a system that leaves room to grow in the future. Myers says supporting economic growth in Polaris, Easton, Grandview Yard and other burgeoning areas is also a priority. Service expansion, which will cost roughly $9.4 million, is partially funded by a sales tax increase approved by voters in November.