As Colombia Remembers Its War Victims, Dissent Creeps Into the UN’s World Urban Forum – Next City 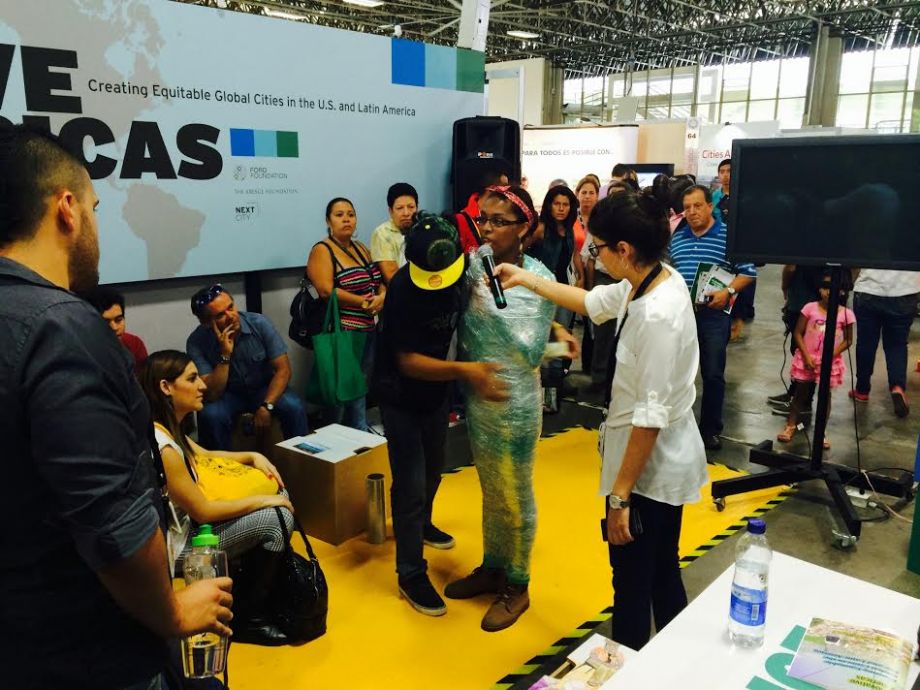 Wednesday, day five of the World Urban Forum, was also Colombia’s National Day of Memory and Solidarity for Victims of Armed Conflict. With more than 250,000 nationals victimized during five decades of violence — civil war, drug cartels, paramilitaries — the issue is a serious topic in Colombia and sounds very much in line with the UN’s own predilection for international days of observance. Indeed, it dedicates nine days annually to victims of various stripes, including Day of Remembrance of Victims of the Rwanda Genocide, which occurred this past Monday.

But tell that to the blue-clad UN police manning the WUF gates as members of the theater group Teatro Pablo Tobón Uribe made their way to Next City’s Innovative Americas booth, some of whose furniture they will inherit, to perform a piece called “¡Oh, no! ¿Hábitat?” Sporting a banner that subverts the UN-Habitat logo by placing a bound victim at its center, the performance artists were halted by suspicious UN cops. After making it clear that this was an artistic intervention, not a protest, as well as an invited performance that city hall had approved in a nearby plaza earlier in the day, the powers that be pointedly informed them, “This isn’t Colombian soil. This is UN territory. You can speak but you can’t criticize.”

With its poster confiscated, this only gave the group more fodder for its performance, which involved mummifying a human being with plastic wrap while a microphone was passed around for performers and spectators to recount personal or communal incidents of victimization. At the end, the mummified performer pulled a Houdini-like escape, shedding the plastic skin and leaving behind a ghostly humanoid sculpture. Dozens of these sculptures were scattered about La Alpujarra Plaza in downtown Medellín during the larger variation of the piece.

The commemoration of National Victims Day in Colombia included this striking performance at City Hall pic.twitter.com/edSx1o85YH

“This is an alternative proposal to the Urban Forum,” the group’s director, Sergio Restrepo, told the El Colombiano newspaper. “Really we celebrate, applaud and are happy for the presence of the forum, but we believe it’s necessary to have another presence. A lot of street dwellers aren’t with us, and in this installation we are calling particular attention to the disappeared.” Indeed, alternatives to the World Urban Forum are nothing new. I recall the World Social Forum taking place across the street from WUF5 in Rio de Janeiro, bringing in rock star lefty urban activists like David “Right to the City” Harvey.

After five days of high-level talks, networking events and flashy exhibitor booths, a collective fatigue has started to settle in. “We’ve had enough of the World Urban Forum — all talk and no action,” Pedro Henrique de Cristo, co-founder of the Brazilian firm +D // Design With Purpose, said at a Wednesday night series of talks at Medellín’s EAFIT University.

De Cristo called out UN-Habitat for bestowing its Scroll of Honor Award (prominently displayed at WUF) upon UPP Social, the social service counterpart to Rio de Janeiro’s heavy-handed UPP policing strategy. For one thing, UN-Habitat was a partner in UPP Social, which suggests some conflict of interest. For another, the consensus is far from unanimous about UPP Social’s results.

Having interned at UN-Habitat while UPP Social was getting off the ground, I can report firsthand that despite the incredibly passionate and talented team, it played second, if not third, fiddle to the immense power of UPP itself. Given only diagnostic power, it could point out missing services — trash collection, schools, health clinics, water and sewer hookups — but at the bottom of the municipal pecking order, it had no real power to get those services to where they were needed. No wonder that de Cristo himself, who toiled for months at UPP Social, felt some catharsis in pointing out the contradiction publicly.

Back to our extraterritorial troubles. The temporary UN zone at the Plaza Mayor Convention Center is hardly unique, and a vital issue for cities that have international events foisted upon them. Brazil is about to get a taste of FIFA’s exclusion zones, where local law won’t apply on everything from the right to protest to commercial vending and advertising in a several-kilometer radius around the stadiums. (Official sponsors only, thank you very much.) In exchange for abdicating sovereignty to FIFA overlords, Brazil will not, according to the latest estimates, recoup its investment in the World Cup. Expect people to head for the streets once again — a protest for all 64 games, I’ve been told.