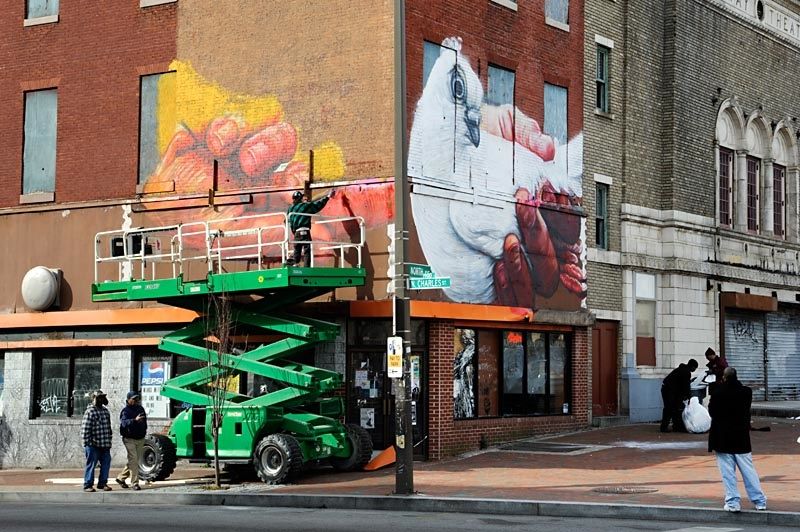 Walk to the corner of North Charles Street and North Avenue in Baltimore’s Station North neighborhood, and you’re likely to notice a monstrous carrier pigeon held in the palm of a cupped hand. It’s hard to miss; the image occupies a substantial chunk of the second-floor brick walls of an abandoned building, an eyesore that happens to be owned by the city.

The massive painting, the handiwork of Manhattan-born, Baltimore-based street artist Gaia, appeared nearly two months ago, and is one of 22 murals finished or currently being painted in Station North. When work wraps up this month, more than 20 street artists from here and abroad will have painted murals on the facades of residences and commercial buildings — both private- and city-owned — as part of an innovative new street art program, Open Walls Baltimore. The lineup is impressive enough that Gaia calls it a “museum” of street art.

Illegal street art, linocut prints or drawings wheat-pasted on walls in the dead of night or murals hastily thrown together, is nothing new. What’s different about the Open Walls brand of guerilla-style artwork is that it has the full backing of Baltimore’s city government — Mayor Stephanie Rawlings-Blake spoke at the official Open Walls launch on March 6 — as well as financial backing to the tune of $63,000 from the PNC Community Foundation and an additional $20,000 from Station North’s Our Town funding. In short, the art has been willingly co-opted.

When Maryland declared Station North an official arts and entertainment district in 2002, the goal was to foster a community of artists who could help revive a section of downtown Baltimore still dealing with vacancy, abandonment and other fallout from the 1968 race riots experienced there.

In the years since, Station North has managed to succeed in capitalizing on Baltimore’s rich arts scene, bolstered by the presence of Maryland Institute College of Art — Gaia’s own alma-mater — to lure restaurants, gallery spaces, music venues and even several new schools. Last July, the district received $150,000 in the inaugural round of Our Town funding, grant money doled out by the National Endowment for the Arts. At the time, Ben Stone, executive director of Station North Arts and Entertainment Inc., which is organizing the installation, said that Baltimore “is at the forefront of this intersection of urban planning and art.”

Gallery: Off the Walls

“The potential here is to make a neighborhood really active and healthy beyond what is already has,” says Gaia, who hopes one outcome of the project is to demonstrate that vacant buildings can be used for something other than demolition. “When [buildings] become decorated with something that is exciting…there is a certain pride in living adjacent or in proximity to any of these murals.”

Still, a level of reticence remains about slapping murals on the sides of buildings, especially when an expected outcome is spurring economic activity. At its most basic level, Gaia says, Open Walls is nothing more than a “visual supplement” to the neighborhood, but that doesn’t tame fears of gentrification leading to displacement of existing artists or low-income families.

“I think the problem [of gentrification] is often blown up out of proportion to an extent,” says Stone. He maintains that “certain things that are set in place won’t change” in Station North, including subsidized and affordable housing for both low-income families and artists. The district itself also plays a large role in all the development projects in the neighborhoods, whether that’s working with the mayor’s office on its Vacants to Value initiative to make it easier for homebuyers to purchase vacant properties owned by the city, or meeting with members of local community associations to discuss, in the case of Open Walls, where and what murals should be painted.

Stone also acknowledges the limitations to what such a project can achieve with respect to neighborhood improvement. “I’m not naive that Open Walls is going to make the drug problem go away or get poverty eliminated,” Stone says.

But the actual influence of Open Walls might exist independently of any sort of tangible change. In Station North, two distinct communities — one predominantly African American and long-standing, the other a new crop of artists and creative-class types — “exist in parallel worlds, but rarely intersect,” says Gaia. Open Walls “brings people to a different part of town that they wouldn’t normally be in,” he says. “It’s more about people transgressing their own boundaries of fear to see something.”

That sort of emotional shift could not only be crucial for a neighborhood looking to draw people to eat dinner at Joe Squared pizza — a local haunt that advertises a “hipster atmosphere” along with its coal-fired square pies — or take in a concert at the indie-music hub, Windup Space, but also powerful for a city that remains, in some respects, divided along socioeconomic and racial lines.

Just last week, Stone walked by an Open Walls artist putting the finishing touches on a mural in an alleyway. Crouched on the pavement around him were five neighborhood children, drawing.

“The qualitative impacts are harder to measure,” he says. “But there are a lot of things that this is doing that can’t be done by other things.”