Minding the Store – Next City 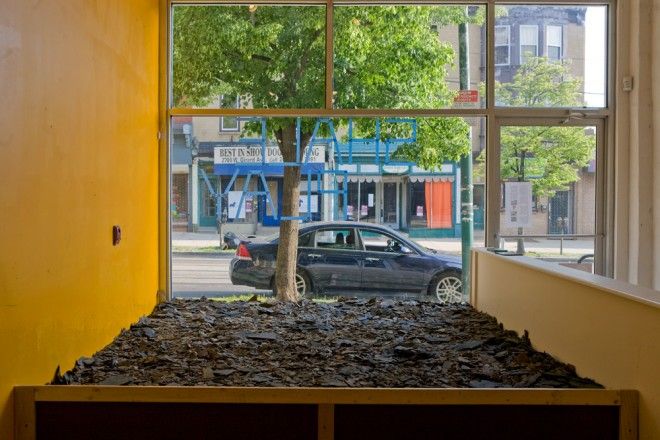 Looking out from the Storefront, where the exhibit Shale Play was installed. Credit: Bradley Maule, Hidden City.

This morning, I came into the office to find part of the ceiling on the floor. A leak had sprung from the roof, causing fetid water to trickle through a new hole in the plaster.

It wasn’t an entirely unusual moment for The Storefront for Urban Innovation, Next City’s office, events and exhibition space in Philadelphia. As we sought out a cheap, big space and landed in the Brewerytown neighborhood 18 months ago, we’ve worked in all kinds of conditions — without A/C through a sweltering summer, without much more than a few standing lamps and desk lamps for lighting, with strangers frequently interrupting our blogging rhythms to check out the exhibitions in our window.

The stripped-down work space in a transitioning neighborhood was indicative of our overall ethos: A streamlined online presence, a skeletal payroll. But life, of course, gets complicated. After branding our office/events/exhibition space as The Storefront for Urban Innovation, we quickly went about scheduling panel discussions and lectures, exhibitions and pop-up presentations, all about urban affairs. This work received a nice amount of attention, from a TED City 2.0 award to local media coverage of the concept and of specific exhibitions.

But as our ambitions grew, our funding for this work didn’t. And it became difficult for our already hardworking staff to spend more of their days (nights, too) organizing and overseeing this work.

Plus, we’ve been pretty busy launching a lot of new online projects, such as The Informal City Dialogues and The Equity Factor.

We sought to have the Storefront serve as a meeting place for urban advocates from all around the world, bringing experts to Philly to learn about this city and tell us about theirs. But more than the programming, the experience of working in Brewerytown — a neighborhood that is completely wrapped up in the flux that accompanies gentrification — taught us something. In conversation with locals about what, exactly, we were doing and what it all meant, we saw how insular the urban advocacy movement can be and sought to find new ways to bridge that knowledge and communication gap. Meanwhile, we’ve had a front-row seat to a neighborhood changing. Watching Girard Avenue overcome its current status as a food desert has been particularly exciting. (During our tenure, a new supermarket opened, a bad one closed down and two new restaurants on the avenue are set to open this summer.)

That said, while we appreciated learning from Brewerytown, as a business we ultimately needed the simple amenities of a central business district, like a place to buy printer ink or a bank to do business or a ceiling that doesn’t leak. We’re also excited that we’ll have more time to dedicate to churning out content, and will spend less time waiting for pitifully slow SEPTA buses. We’ll have more opportunities for the spontaneous interactions that characterize an urban area instead of wishing we could meet colleagues for lunch, but knowing it’s too far away from Brewerytown for a quick chat.

We feel heartened that the Storefront may live on — just not on Girard Avenue. Over the past year, we’ve fielded calls from Detroit to Louisville about similar initiatives that wanted to learn from Next City. This inspired us to host a conference called Crafting Corridors, which gathered dozens of people around the country to discuss the future of commercial space.

I asked a few colleagues if they felt The Storefront for Urban Innovation influenced their work. As one example, Jason Clement of the National Trust for Historic Preservation, told me this:

Next City’s Storefront changed the way I think about engagement. These days, everything happens online as if by default. What I learned from the creative programming of the storefront is the unrivaled value of not only practicing what you preach, but coalescing people in a way that works and rewards. Next City created a beehive where people could interact with issues in real life, and that inspired me to think about how historic preservation can — and will — pop up in neighborhoods around the nation.

Ultimately, the Storefront’s legacy is a renewed effort to engage and collaborate with new, and sometimes unlikely, partners. Without having our own space, Next City will be teaming up with organizations and people around the country to host events, exhibits and other types of programming. Thanks to everyone who stopped by our space on Girard Avenue. We’ll see you at our next event soon.