Climate Marcher on the Future: “I’d Like to Not Think About It” 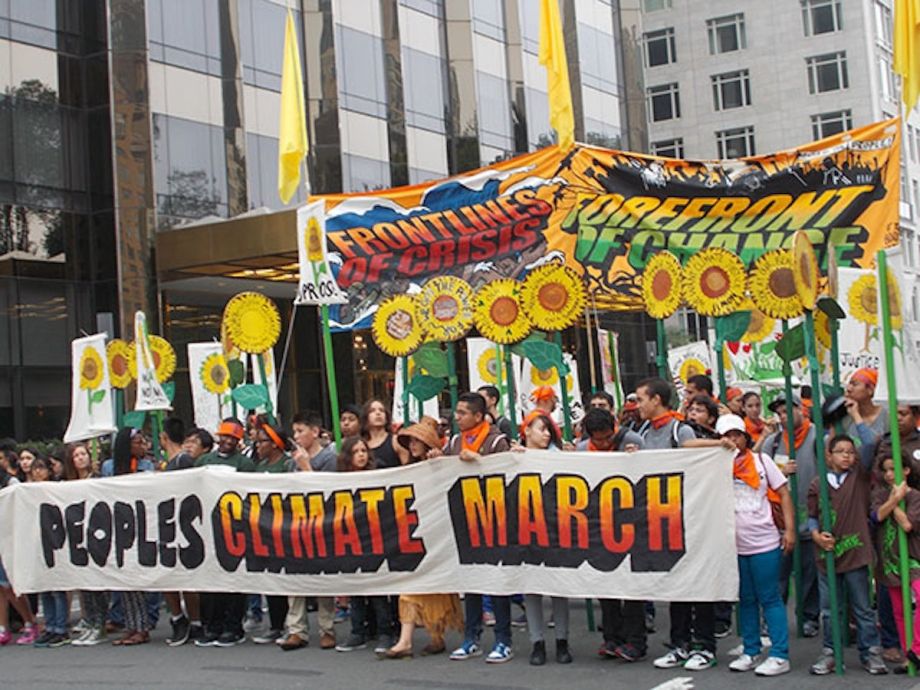 “We said it would take everyone to change everything,” Eddie Bautista of the New York City Environmental Justice Alliance said in an official press release just after the People’s Climate March on Sunday, “and everyone showed up.”

This is hyperbole, but not by much. The march, timed to call attention to today’s UN Climate Summit, had billed itself as the largest protest over climate change in history. It was. Official estimates put the New York march at 310,000 people. Some 2,500 simultaneous events in other countries also drew large crowds, including 25,000 to a march in Paris.

Size alone was not the only historical oddity. Rather than noisy outsiders dissenting against the powers-that-be, the People’s Climate March included the powerful. UN head Ban Ki-moon, former Vice President Al Gore, and many dignitaries attending the UN summit joined the march. In a fairly unusual way, “everyone” really seemed to mean everyone.

But having shown up, what does everyone want? If everyone changes everything, what will the future look like?

On 72nd Street and Broadway, marchers gathered behind an officially sanctioned banner that read “We Have the Solutions.” Groups gathered under signs promoting organic food, fracking bans and water regulations. Overall, the mood was optimistic.

Few, however, could explain what an emissions-free future might look like. Although unusually succinct, a woman named Ana gave a representative comment. Asked what the world would look like if the march had substantial impact, she merely said, “Better.”

The march, which included no official demands, offered a wide range of perspectives on how to avert climate change. New Jersey teacher Liz De Marco felt the solution involved “finally getting on board with something like the Kyoto Protocol,” while Columbia University student Samuel Falcone felt the solution lay in “a more progressive Democratic candidate.”

Other marchers emphasized personal change. A man named Yann hoisting a sign promoting veganism, explained, “If you eat meat, you are killing the environment. … That’s where the change will come from. People need to become vegan.”

“Nothing is going to come from governments,” he added, despite his presence at a march timed to capture the attention of some 125 heads of state.

Activist Cory Porter shared Yann’s antipathy, but not his resignation. Holding a sign that read “I am U.N.impressed,” Porter explained that previous commitments by the UN had led to a disappointing lack of action. Among the marchers, Butler had a rare ability to quantify the changes he thought were necessary: a reduction of atmospheric carbon from 400 parts per million to 350 ppm. He saw enforcement of UN sanctions as critical. “We probably have only about 50 to 100 years to reverse it,” he said.

Porter’s estimate of the opportunity for change may be optimistic: The planet may have a window of less than one decade, not five, to radically lower carbon emissions. Author Naomi Klein, whose 2014 book This Changes Everything might be the closest thing the movement has to a manifesto, claims that a reduction in carbon emissions by 8 percent to 10 percent is required for each of the next 10 years to avert climate disaster. Yet, she writes, “The only thing rising faster than our emissions is the output of words pledging to lower them.” The book’s subtitle encompasses her perspective: Capitalism versus the Climate.

Farther down Broadway, protestor Justin Adkins carried one of the few signs affirming her viewpoint. Adkins, who promoted anarchism, said, “I think capitalism is the root of climate change. We could change all the light bulbs in the world, and that would make only a small dent.” The alternative to radical political change, he said, was “passive mass slaughter” — meaning rapid depopulation precipitated by climate crisis.

Adkins was one of the few marchers willing to espouse some of climate experts’ darker predictions, including mass migration, political conflict, or excess mortality. Missouri environmentalist Tristan Laughlin said he avoided considering what would happen if climate change was not averted: “I’m not sure. I’d like to not think about it.”

Faced with a movement that wants rapid, sweeping change without downsides, some heads of state may feel the same way. The presence of VIPs in the streets pointed to a lack of political momentum — a view supported by the absence of German PM Angela Merkel, Chinese President Xi Jinping, and India’s newly inaugurated prime minister, Narendra Modi, from the UN Climate Summit itself.

Nor is it clear that the marchers will keep thinking about future danger. The UN Climate Summit is the opening volley in a negotiation process that will culminate in Paris in 2015. Although many marchers spoke of their ongoing environmentalist commitment, none mentioned a sustained organizing effort toward the 2015 event.

Nonetheless, the mood on the protest route included a seriousness that spoke to the critical moment. As author Vandana Shiva, famous for environmental activism in her native India, said in an interview that morning, “The movement will have to continue, or we as a species are finished.”