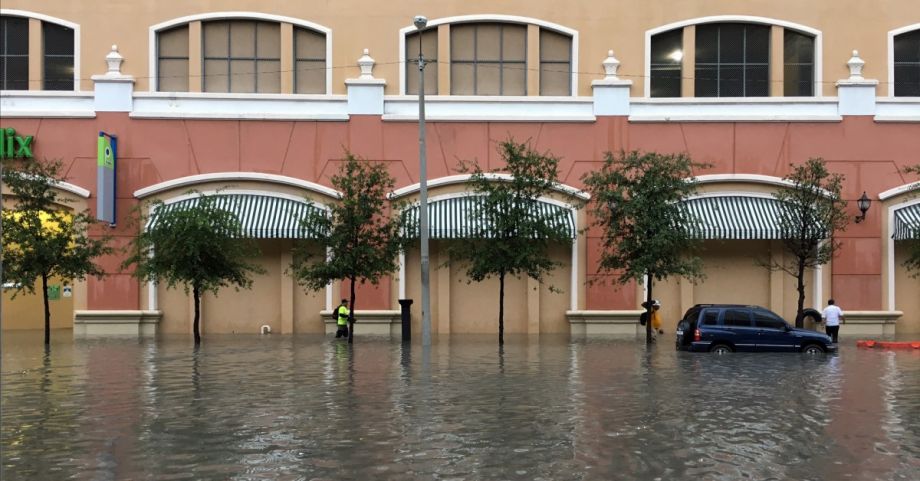 Flooding in Miami's Brickell neighborhood in 2017 (Photo by Phillip Pessar / CC BY 2.0)

New research suggests that concerns about climate change and sea-level rise are already starting to lower the value of property in Florida’s expensive coastal markets, according to a report published in the New York Times this week. The paper, which was authored by two researchers at the University of Pennsylvania, shows that the number of property sales in low-lying areas vulnerable to sea-level rise began to slow down in 2013 compared to areas on higher ground, according to the report. By 2018, the research shows, home sales in low-lying areas were 16 to 20 percent lower than safer areas. Since 2018, home sale prices in vulnerable areas have dropped by 5 percent compared to less-vulnerable areas, the report says.

As the report notes, science has shown for some time that sea-level rise could put thousands of homes and roads at risk of regular flooding. The story cites a report from The Union of Concerned Scientists in 2018 which suggests that across the United States, 300,000 homes could be at risk of “chronic inundation” by 2045. Some recent projections suggest that the sea level in southeast Florida could rise 31 inches by 2060, according to a report last year in WLRN.

In 2013, Rolling Stone reporter Jeff Goodell wrote a story called “Goodbye, Miami,” describing the threats that sea-level rise poses to South Florida and the degree to which local leaders were unprepared to face it. Today, some mayors and real estate agents in coastal cities and towns remain in denial about the impacts of climate change on local real estate markets, the Times report notes. But the new research shows that housing markets are starting to contract in areas that are likelier to flood as the sea level rises, the report says.

“I think the fundamental reason is the increase of home buyers’ awareness of the risk,” Tingyu Zhou, an assistant professor of real estate at Florida State University who was not involved in producing the research, told the Times.

“Internet connectivity is not a luxury in our time — it’s an absolute necessity for parents trying to work, students looking to learn, and families and friends seeking to communicate,” L.A. Mayor Eric Garcetti said in a statement, according to the report.

After the six-month period ends, users will pay $15 a month for service, according to the report. A previous report in the L.A. Times in September showed that thousands of students in Los Angeles County school districts are still in need of internet access or critical technology to complete their school work.

The costs of homeownership are higher for Black Americans than white Americans, according to new research summarized in a report on CNN. The paper shows that Black homeowners pay more for mortgage insurance, mortgage interest, and property taxes compared to white homeowners in comparable properties, according to CNN. Relatively small differences in monthly costs add up to large sums over the length of a 30-year mortgage, and result in Black households having an average of $67,320 less in retirement savings than white households, according to the report.

“These inequities make it impossible for black households to build housing wealth at the same rate as white households,” the authors conclude. “The black-white income gap of $25,800 is exacerbated by this ‘black tax’ on homeownership. If we eliminate these extra costs paid by African Americans, the $130,000 black-white gap in liquid savings at retirement would drop by half.”

The discrepancies can be explained partially by policies that tend to deem Black households a higher mortgage risk than white ones. Because of the racial wealth gap, created and sustained by racist policies, Black households often have lower down payments and lower credit scores than white households.

“While mortgage costs are determined by markets to some extent, there is a great deal of public policy that influences these rates, especially as it impacts people of color,” Edward Golding, executive director of the MIT Golub Center for Finance and Policy and one of the lead authors of the report, told CNN. “We can and should address these issues at a policy level and start now to eliminate the large wealth gap between Black and white homeowners that we created in part through our current mortgage system.”