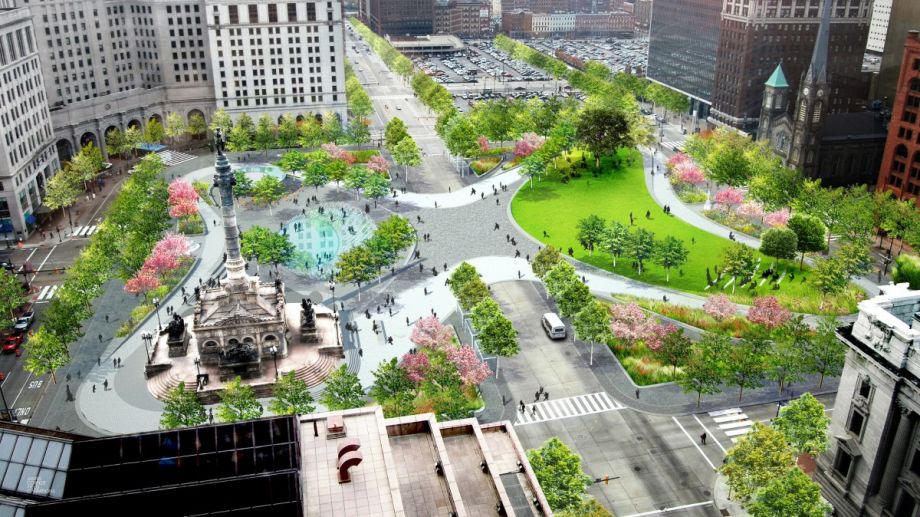 The physical heart of Cleveland is a 10-acre civic space called Public Square, but until recently it wasn’t exactly pulsing with life. Two of downtown’s busiest roadways, Ontario Street and Superior Avenue, bisected the square, and its four quadrants felt neglected and forgotten. Instead of being a destination, it was a place people avoided.

Yet now, following a 15-month, $50 million renovation, Public Square is reopening as a dramatically re-envisioned centerpiece of the city’s ongoing redevelopment efforts. Designed by James Corner Field Operations, the architects behind New York’s High Line, it now has a lush green lawn, unobstructed city views, a full-service cafe with outdoor seating and a mirror pool that reflects the landmark buildings lining the square.

Perhaps most significantly, traffic has been eliminated through the park except for buses.

The nonprofit Group Plan Commission led the project. The organization’s name comes from the Group Plan of 1903, in which famed urban planner Daniel Burnham envisioned a promenade of public malls leading north from iconic skyscraper Terminal Tower to Lake Erie. With an increasing number of people living and working downtown and the Republican National Convention set to bring more than 50,000 visitors in July, leaders say it couldn’t come at a better time.

“Now you have downtown as a neighborhood,” says Jeremy Paris, executive director of the Group Plan Commission. “We’re taking back the square and returning it to a green space. It really transforms this part of the city. This spot symbolizes the change.”

Downtown Cleveland currently has about 14,000 residents. It has also experienced a 21 percent increase in visitors during the past four years, to 16.9 million in 2014 (the most recent year available). The office market is also improving, though it’s still considered somewhat soft.

Nora Romanoff, of Land Studio, a Cleveland public art and design nonprofit also involved with Public Square’s makeover, says closing traffic was critical. “We didn’t take closing streets lightly, we took it seriously, and found we could do it and give it back to the square,” she says. “If we were doing this and all the streets remained, we would not be swinging as big a bat.”

The project, which was paid for using tax increment financing as well as public, private and corporate sources, including major donations from the Cleveland Foundation, George Gund Foundation, Key Bank and others, was more expensive than anticipated. This is largely due to the high cost of underground infrastructure work. Of the $50 million price tag, about $37 million went to the square itself, while $13 million went toward new infrastructure.

The square was conceived by city founder Moses Cleaveland, who based it on Connecticut town greens. The park’s historic elements — statues of Cleaveland and progressive reform Mayor Tom Johnson as well as the Soldiers’ and Sailors’ Monument — have all been carefully restored.

Although the project includes many elements of high design — the water feature’s 117 jets are each coupled with a light to create the reflection — it will function as a people-friendly space, says Romanoff.

“When it’s fully flooded you’ll be able to walk through it with your shoes on, but it will also reflect the buildings and trees around it,” she says of the mirror pool.

The park also includes many sustainable features. For example, water will be captured in an underground tank and fed back to the tree and plant beds. The trees and plantings all have year-round expressions.

The new design has four quadrants, but they flow together seamlessly. The Soldiers’ and Sailors’ Monument lies in the southeast corner of the park, while the cafe sits in the southwest corner. A hardscaped area lies between these two areas, including the Speaker’s Terrace, the mirror pool and a central plaza.

The northeast corner of the park contains Concert Hill, a terraced hillside area with concert seating, and Overlook Hill, a grassy spot with downtown views. A big green lawn connects these two spaces. A butterfly-shaped pathway weaves throughout the park, and there are many places of respite where visitors can sit and enjoy the scenery.

Concerns that the new Public Square will displace transit riders are unfounded, Paris says. The city’s light-rail system still uses the nearby Terminal Tower as its main hub. Additionally, bus shelters are positioned around the square.

However, the presence of transit riders around the new park inadvertently showcases the stark divide in Cleveland: On the one hand, the city is experiencing significant growth, yet on the other hand, one in three Clevelanders remain in poverty.

In fact, the regional transit service recently announced major cuts in service to cover a $7 million shortfall. When extreme delays caused a social media uproar during last week’s championship parade for the Cavaliers, the agency blamed the state for not investing more in public transportation.

“We apologize for your delay. We are over capacity and underfunded,” it tweeted. “If the State of Ohio were to start spending more than 63 cents per capita on public transportation it would help.” 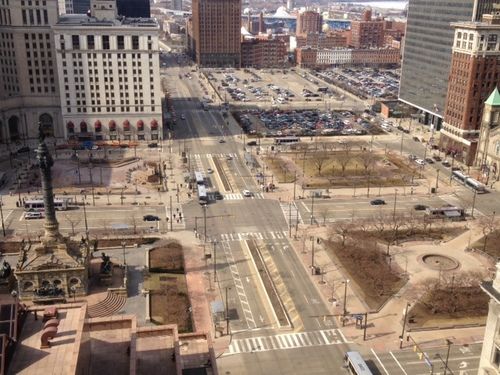 Paris says the new park is intended to be a space for the entire city. It will be programmed with events year round, from farmers markets and yoga classes to holiday tree lighting and winter ice skating. The first event is a July 29 concert by the Cleveland Orchestra. The Group Plan Commission has so far raised $3.8 million of the $6.8 million it needs for maintenance and programming.

“In planning, there’s a question of who this is for,” he says. “I think great cities are great melting pots. This is really everybody’s neighborhood.”

Romanoff says the new square shows that Cleveland’s leaders are really thinking about how parks and public spaces can connect neighborhoods and spur economic development. “I think we’d lost sight of questioning our spaces, and making sure they were people-sized,” she says of the 1990s and 2000s when the Rock and Roll Hall of Fame and major sports stadiums were built downtown. “We do a great job at destinations, but how do we get people there?”

Romanoff says the buildings around Public Square have already risen in value, and area real estate brokers report increased interest. However, the two planners scoff at the notion that the project was completed in time for the RNC. “I get that people think that, but there’s nothing about this park that would have been ready to go if we’d found out about it two years ago,” says Romanoff.

Now that Public Square is complete, the Group Plan Commission is working on reinvigorating other downtown public spaces. For example, the city is building a pedestrian-bike bridge to better connect the malls with the lakefront.

“You used to drive down Superior and you wouldn’t know you were in a public space,” says Paris. “Now this is part of a connected green space in the heart of Cleveland that rivals the size of Millenium Park in Chicago. It’s really a different way to think about the city and take advantage of the city’s walkability.”