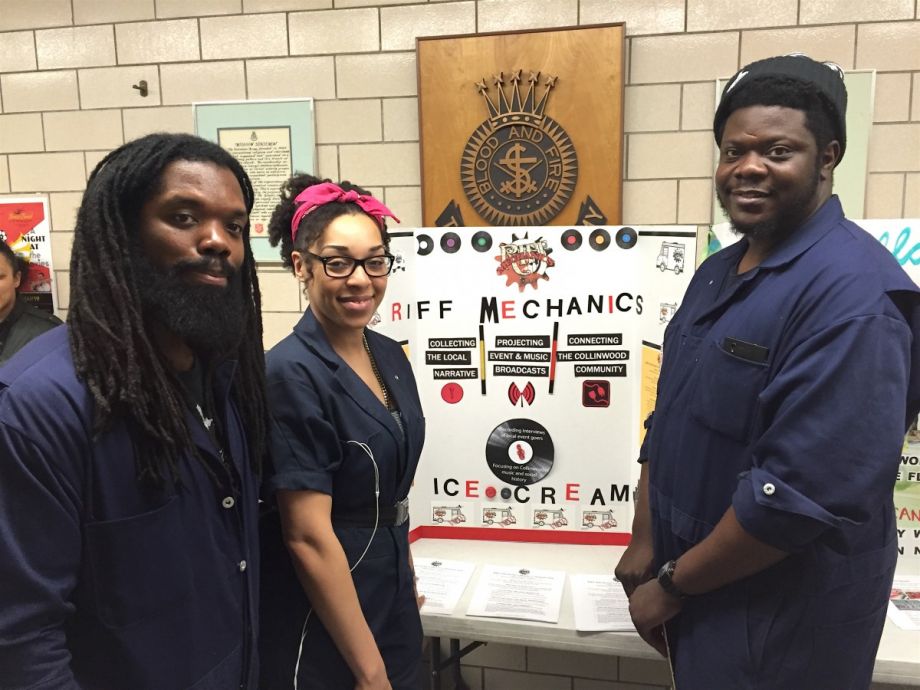 On a recent Wednesday afternoon in North Collinwood in Cleveland, an unusual experiment in local democracy was unfolding. Even as the nation fixated on the ongoing presidential primaries, dozens of voters flooded the Salvation Army for a completely different reason: to decide which among 34 applicants would receive a share of $120,000 in artist project funding.

The Ballot Box Project, which its backers say is Ohio’s first experiment with participatory budgeting, has generated intense competition among artists and a slew of creative ideas for improving the neighborhood.

Residents entering the polling location walked down a long hallway where artists had set up science-fair-style trifolds marketing their projects. The Collinwood Teen Literary Project and Lit Jam Poetry Prize promised to offer youth writing and performance workshops with a final competition for a $500 prize. “Operation: Vegetables” aims to spur healthy eating habits through a giant, family-friendly board game. Riff Mechanics envisions a “Splice-cream truck,” a mobile recording studio intended to capture the neighborhood’s oral history.

Although this working-class neighborhood on Lake Erie has been hard-hit by the decline of manufacturing and foreclosures, it is seeing a budding resurgence thanks in part to artists moving here. Organizers hope to use the Ballot Box Project to take the neighborhood’s growing vitality to the next level.

“It’s been amazing,” says Brian Friedman, executive director of Northeast Shores Development Corporation, a nonprofit CDC, of the turnout. “People have obviously felt really engaged, and they want to make sure their voices are heard.”

Friedman and his staff came up with the idea behind the Ballot Box Project after learning about participatory budgeting, a process that has been used by more than 1,200 cities globally to help decide how government and philanthropic funds are spent. Northeast Shores has given away $500,000 to arts-based community development projects in the past five years, but Friedman says the process of using a panel of artists to make decisions was always slightly dissatisfying.

“We were always challenged by the question of how we get the community more engaged in the actual decision-making process,” says Friedman. “The panel review process, while a perfectly valid way to do things, hasn’t frankly met the expectations of the neighborhood to make sure it’s a really transparent process.”

The Ballot Box Project was made possible by a $200,000 grant from ArtPlace America. Last year, Northeast Shores held a community meeting to kick off the process. Residents brainstormed funding areas and voted on their top four: Collinwood history, vacancy, healthy eating and youth engagement. They solicited artist proposals on those issues and set up a voting process through the Cuyahoga County Board of Elections.

The March voting rotated to different locations throughout the neighborhood. In two weeks, Friedman says, more than 300 valid ballots were cast. Winners were announced on March 16. “Operation: Vegetables” won the healthy eating category. The vacancy winner, Michael Hudecek’s “Craft Up Collinwood,” will aim to get residents to create artful displays for eyesore properties.

Adele Markert, who has lived in North Collinwood for 30 years, says the Ballot Box Project has been a boon. “It got a lot of people involved and has been a really innovative way to do it,” she says, adding, “I think investing in arts projects has brought a lot of people back into the neighborhood and attracted businesses here. I’m happy to see young families moving in too.”

Friedman says Northeast Shores partnered with the board of elections to enhance the legitimacy of the vote. “They saw the merits of it, and that we were empowering the neighborhood to vote,” he says.

Anyone living or working in the neighborhood was eligible to vote, even if they weren’t on the voter rolls. Volunteers were on hand to register people. Youth 14 and up were also eligible.

“What better way to determine youth benefit than having them vote on it?” says Friedman. “For anyone that age, this is their first time holding a ballot. It’s one touch point in helping them realize the importance of democracy when they turn 18.”

Friedman says Northeast Shores’ approach to arts-based development not only engages artists in the neighborhood but also offers them opportunities to become long-term stakeholders. The group has a program that sells vacant homes to artists and others for $8,500 and helps them fix up the properties, and they’ve also helped arts-based businesses get started and purchase buildings in the Waterloo Arts District.

“Here at Northeast Shores, our lead philosophy is we’re trying to make sure this neighborhood doesn’t gentrify past artists and that artists who live here become part of the community,” he says. “We use art to cure a lot of Collinwood’s social ills. It’s about the artist as civic leader.”