NASA Images Capture How Air Has Gotten Cleaner in 6 Cities 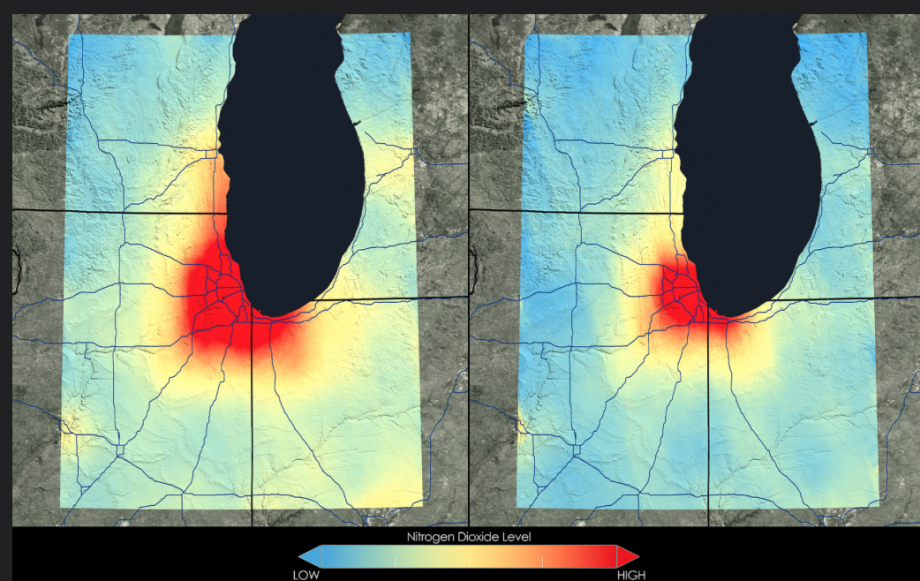 Chicago has seen the sharpest reduction in nitrogen dioxide levels. The image shows how nitrogen dioxide concentrations during spring and summer months, averaged from 2005-2007 (left), compare to the average from 2009-2011 (right). (Credit: NASA)

Finally, there is some hopeful environmental news to share!

New satellite images recently released by NASA show that air pollution is on the decline in some of the largest U.S. cities. In particular, levels of nitrogen dioxide — a brownish gas linked to respiratory problems — have dropped significantly since 2005, the agency’s scientists say. The gas is produced by gasoline combustion in cars and burning natural gas in power plants. Its decrease at a time when more people are consuming energy and driving cars can be seen as a victory for the Environmental Protection Agency and other agencies that enforce clean air regulations. The progress also indicates that new clean air technologies are helping us shrink our environmental footprint. Still, NASA scientists warn that its still far too soon to begin taking strolls under your local smoke stacks.

“While our air quality has certainly improved over the last few decades, there is still work to do — ozone and particulate matter are still problems,” said Bryan Duncan, an atmospheric scientist at NASA’s Goddard Space Flight Center in Greenbelt, Maryland in a published statement. And while air quality may be improving, power plant emissions of carbon dioxide — a greenhouse gas — remain an unmitigated threat.