What a 2-Year-Old Can Teach Us About City Planning 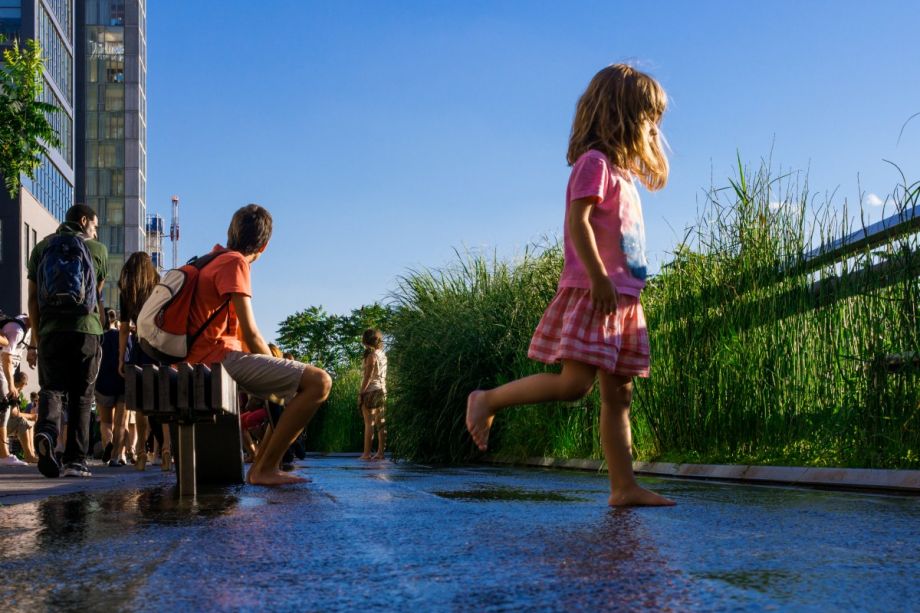 Eric Feldman is used to viewing his neighborhood through a designer’s lens. Lately, however, he’s found himself observing the streets, sidewalks, gutters and even manhole covers from a different perspective — “specifically from an elevation of 34 inches,” as he wrote recently on design firm Rhodeside & Harwell’s blog. (Feldman is an urban planner there.)

While the topic’s one that could be relegated to the “Toddler Parenting” section of the Internet — where you can also find sleep training feuds and so many Frozen sing-a-longs that “Let It Go” will echo through your dreams — it shouldn’t be. As Feldman explains, designing for toddlers can actually be a metric for good planning in general, particularly in the area of walkable streets.

The idea came from many, many walks with his two-year-old through their Capitol Hill, D.C., neighborhood, down the “same stretch of sidewalk to make it to the park,” he says. Covering a small patch of city slowly — pushing the stroller as his daughter walked — he began paying attention to pieces of infrastructure he’d barely noticed as a quick-traveling, utilitarian adult: manholes, storm drains, texture changes in the sidewalk, tree roots, planters, pebbles to grab (“and steal from the neighbors’ landscaping,” he says).

But slowing down didn’t just give him a better appreciation for the streetscape. Because their journey was supposedly aimed at a destination — the park — he began thinking about the value of the walk itself.

“The journey was the destination,” he says.

It’s not an entirely new idea. At a conference in Chicago last year, the playground builders at KaBOOM! advocated a concept called “the corner store of play” to give children quick, folded-into-their-day access to physical activity. Ideas included fun bus stops, hopscotch lines on the sidewalk and small pocket parks. Meanwhile, a new report from the Aspen Institute takes a similar approach with spaces for organized sports — shrinking the traditional “sprawling complex” into small, redeveloped parcels, sub-divided tennis courts or even closed-down streets.

Taking a cue from some of these ideas, Feldman thinks even smaller — or, rather, younger.

From pavement embedded with small bits of color to artistic manhole covers and public art, he wants other planners to think about the 34-inch perspective. That would mean, he says, asking “whether this street can provide a range of activities, destinations and discoveries” for its most fascinated-yet-perpetually-distracted pedestrians — literally rethinking the term “mixed use” to apply to them.

Of course, such an approach could swerve into the so-called cutesification of urban design. On Next City a few months ago, writer Sarah Goodyear explored a number of expensive (and, often, corporately promoted) “play” devices build into urban infrastructure: “Regular bus commuters don’t need swings, they need shelter from the elements and reliable information about bus arrival time. Pedestrians don’t need to play games at the crosswalk, they need shorter crossing distances, longer walk signals, and better separation from cars.”

But designing with very small people in mind isn’t just an exercise in whimsy. As Feldman explains, from the perspective of good planning — and especially to encourage safe walking — thinking from the point of view of a toddler actually makes a lot of sense.

“If you design for ages two and 92 you’re probably going to do it right,” he says, adding that “toddlers have a way of revealing things” about your streets.

“It’s not rocket science but it is a new way of looking at pedestrian-oriented development,” Feldman says, “You need to ask ‘When is a walkable community really walkable for a family with small kids?’”

To echo Goodman’s article, artistic manhole covers aren’t everything. To create a truly family-friendly city, planners and officials need to think long and hard about tougher issues — public transportation, childcare access, affordable housing, education. But designing from 34 inches could be a good start. At the very best, it could foster a safe, engaging atmosphere for the most vulnerable pedestrians. At the very least, it could invite a new appreciation for the wonder of storm drains — those fascinating structures that, Feldman writes in his post “echo when we shout into them and allow us to view our reflections in the collected water below.”