What a Park’s Design Does to Your Brain – Next City

What a Park’s Design Does to Your Brain 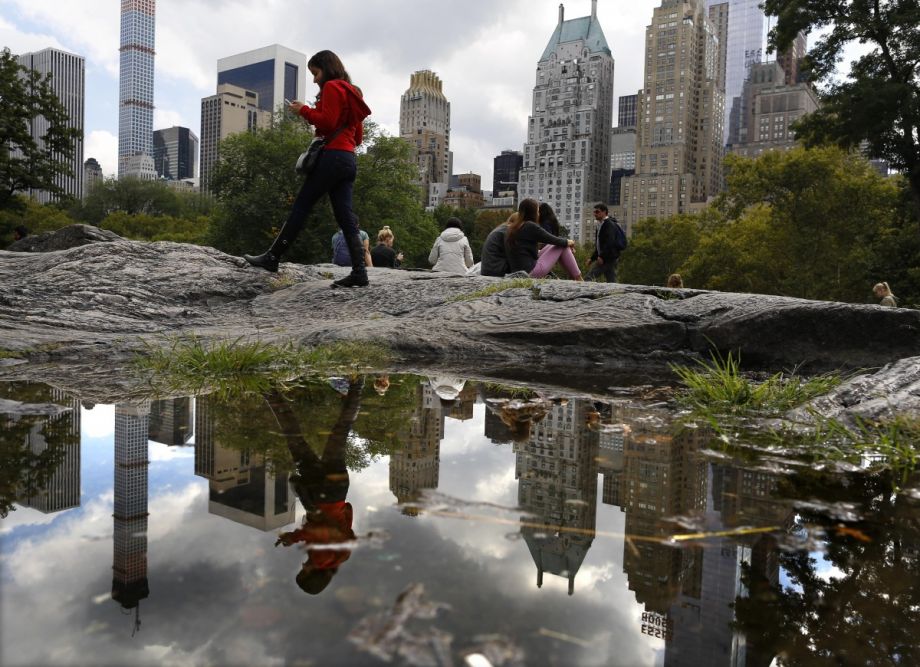 As a student in Poland, Agnieszka Anna Olszewska was fascinated by the way that some landscapes seemed to be more contemplative than others. She wanted to research the reasons behind that calming effect, but she found little encouragement. “People told me I can write a novel, I can write a poem about the contemplativeness of landscape, but not a scientific paper.” One well-respected landscape architect told her it couldn’t be done because of the diversity of human responses: Some of us might find a garden conducive to contemplation; others might prefer the bathroom.

But Olszewska, now a doctoral candidate in landscape architecture and urban ecology at the University of Porto in Portugal, persevered. With a neuroscience professor at the university, she conducted a pilot project that culminated, earlier this year, in a conference paper titled “Urban Planning, Neurosciences and Contemplation for Improving Well-being in Our Cities.” It combined questionnaire results with measurement of brain waves in an effort “to prove that there are certain characteristics of urban parks and gardens that can induce in the visitor the pattern of brain activity that is associated with contemplative or meditative states.”

We know that cities can be hectic, stressful places. We also know that green space can have a calming effect on people. But Olszewska is seeking to take our knowledge a step further — to enable designers and planners to maximize the serenity of urban green refuges.

In the study, four design experts examined 50 photographs from three urban parks in Portugal and France. The experts were also given a checklist of design features (such as long-distance views, biodiversity, “canopied,” “panoramic”). They identified which features appeared in each photograph, and also evaluated each setting’s contemplativeness. The settings deemed most contemplative had panoramic vistas with long-distance views (more than 400 meters). They tended to include large empty spaces, natural asymmetry, clearings and stimulation to look at the sky. The least contemplative settings, by contrast, usually lacked these features, and instead had characteristics such as paths and enclosed spaces (as in small pocket gardens).

In the second part of the project, subjects were asked to look at the 15 photos of landscapes ranked highest by the experts for contemplativeness. Their brain waves were recorded by electroencephalography (EEG) during this task. The brain activity, Olszewska said, was similar to patterns known to be associated with mindfulness achieved through meditation. She stresses, though, that her research is quite preliminary; subjects weren’t shown the least contemplative spaces. (She is currently working on a study that includes this kind of control group.)

The most contemplative landscapes are not necessarily the ones that people would claim to enjoy the most. More stimulating landscapes — brightly colored flowers, numerous eye-catching elements — may be more immediately attractive. “If you imagine the French baroque gardens, they are very geometrical, very organized,” said Olszewska. But this kind of environment, however beautiful, may be less relaxing to spend time in.

This is not to say that the opposite extreme — wild landscapes — is necessarily more contemplative. Olszewska thinks we tend to find those overwhelming. Instead, she hypothesizes that the ideal is a “golden middle” between too much design and too little.

The small experiment is part of a larger, nascent movement to try to connect neuroscience to architecture and design. The movement for “evidence-based design” originated in the health care field. One famous finding was that in hospitals — historically not the most pleasant places — surgical patients whose windows faced natural outdoor scenery were discharged sooner and requested fewer painkillers than patients whose windows faced a brick wall. Inspired by this movement, others began to think that there was no reason to limit such thinking to hospitals. It spread to schools, and now, increasingly, the built environment and urban green spaces. Some researchers began to incorporate neuroscience. Much of the interest is focused on contemplativeness. Perhaps, just as hospitals need healing spaces, cities need serene oases to counteract the urban chaos.

Julio Bermudez, an associate professor of architecture and planning at the Catholic University of America, studies how the built environment can induce states of relaxation and mindfulness. In one study, which he presented last week at the second annual conference of the Academy of Neuroscience for Architecture, architects looked at photographs of buildings designed to be contemplative, including the Salk Institute in San Diego and the Pantheon in Rome, as well as ordinary buildings. The contemplative buildings reportedly elicited “markedly distinct” responses, as measured by functional Magnetic Resonance Imaging (fMRI). Bermudez and his co-authors (including a neuroscientist at the University of Utah) concluded that contemplative buildings “allow subjects to enter into a meditative state with diminishing levels of anxiety and mind wandering.”

In an email, Bermudez speculated about some common features of contemplative design: buildings that frame nature in some way; that exhibit simplicity without being simplistic; and that offer a sense of separation from the rest of their context, among other qualities. Some “remarkable cities,” he wrote, “naturally invite contemplative states.” As examples, he cited Santiago de Compostela in Spain and Bodh Gaya in India, as well as parts of Paris, Washington D.C. and San Francisco.

It may be true that, as the landscape architect warned Olszewska, it’s hard to make blanket generalizations about what people find contemplative, and responses may vary culturally too. It’s also notoriously challenging to interpret brain waves conclusively, and this research is in its infancy. But both Olszewska and Bermudez believe there are certain common features that can broadly foster these meditative responses. And rather than write poems, they hope to prove it with the tools of fMRI and EEG.