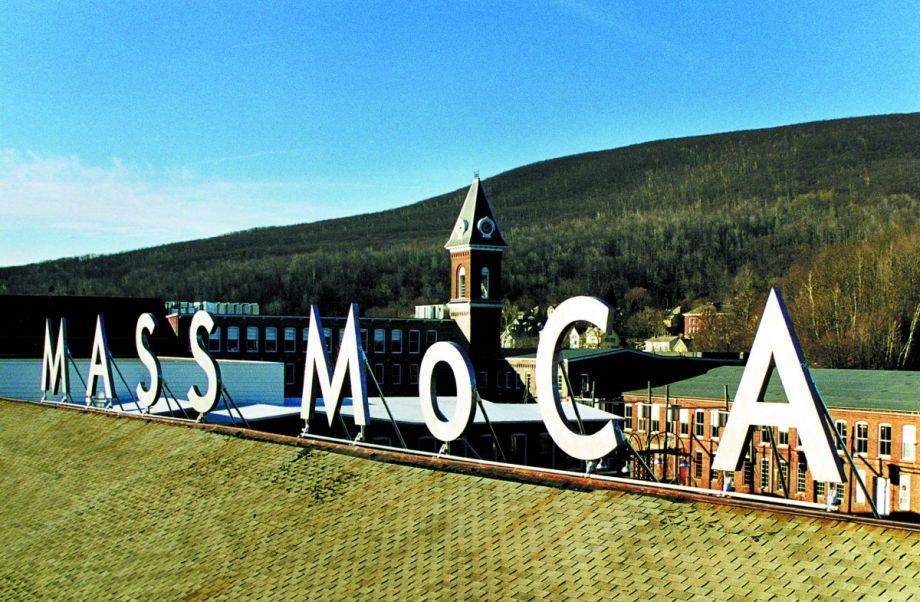 The transition from industrial to post-industrial to knowledge economy is a familiar, but that doesn’t mean smaller cities have figured out all the answers. North Adams, in western Massachusetts’ Berkshire Mountains, however, got some vindication last month that their strategy to become an art hub is working. On November 17th, outgoing Gov. Deval Patrick announced a $25.4 million state grant that, matched with upwards of $30 million in private funds, will allow the Massachusetts Museum of Contemporary Art (MASS MoCA) to renovate another 140,000 square feet into gallery space on its 13-acre campus. While this expansion will make it the largest contemporary art museum in the U.S., MASS MoCA has also been pioneering new economic models, civic engagement strategies and urban design interventions that are relevant for museums in much larger cities.

The confluence of two branches of the Hoosic River in North Adams has attracted manufacturing since colonial times. From 1860 to 1942, the Arnold Print Works (now home to MASS MoCA) was a leading textile facility. Later, Sprague Electric Company produced parts there for projects as significant as the atomic bomb and later the Gemini moon missions. Over the years, the two employers made North Adams a consummate company town, with nearly one-quarter of residents working for Sprague at its peak before it closed in 1985.

Three of Mackenzie Greer’s relatives worked at Sprague. She is now the city planner for the North Adams Office of Community Development. “You can’t expect a museum to employ the entire city,” she cautions, “but MASS MoCA was the idea that died a thousand deaths and kept going.”

First floated in the late 1980s by curators down the road at the Williams College Museum of Art, who couldn’t find a space to exhibit large contemporary art pieces, the transformation from factory to museum depended heavily on public support from the state, starting with a $35 million grant in 1988, contingent on private-sector support. An economic downturn threatened the project, but a rebound in the 1990s led to feasibility studies and, ultimately, opening day in 1999.

From the get-go, it was a unique arrangement, according to Joseph Thompson, the museum’s executive director.

“[MASS] MoCA may have one of the oddest charters and missions of any museum. It is two-headed, to promote contemporary art and to encourage community redevelopment as an economic catalyst,” he explains. To that end, the MASS MoCA Cultural Development Commission, a public entity, owns the site, qualifying the museum for these hefty state grants.

To meet the second part of its mandate, MASS MoCA operates as a commercial landlord, leasing space to law firms, a publishing house and retailers, which brings jobs into the city and has been fundamental in helping the museum pay the bills during its first decade. “MoMA has air rights worth millions of dollars,” Thompson points out.

It also administers Assets for Artists, a program providing financial and business training, as well as matched savings accounts, to low-income artists. That push has helped artists settle in town at spaces like the Eclipse Mill, a four-story work/live space. Earlier this year, Mic put North Adams at No. 2 on its list of 15 best cities that aren’t New York or Los Angeles for 20-something creatives.

MASS MoCA counts 120,000 visitors annually, but a museum requires far fewer employees than a factory. Visitors also come and go, as opposed to working residents who pump their paychecks back into downtown. During the museum’s summertime Solid Sound Festival, curated by Wilco, when the grounds are the most packed they will be all year, Greer marvels, “This is what it must have been like at lunchtime on a regular working day.”

With a huge parking lot just inside the gates and on-ramps to the Route 2 overpass blocking views of Main Street, keeping visitors around has been a challenge. A few small wayfinding tricks, like sidewalk stencils advertising “More Art This Way,” haven’t been enough. Keith Bona, proprietor of the Berkshire Emporium on Main Street and a city councilperson, says, “I’ve felt all along we needed some breadcrumbs to lead people from MoCA to downtown.”

Consequently, the museum took a bold step outside its gates by purchasing buildings along an adjacent street with plans to redevelop them into a public park. It will take over management of the defunct Western Gateway Heritage State Park and transform it into the Greylock Market, a retail hub for local artisans at the base of the state’s tallest mountain, popular hiking destination Mt. Greylock. MASS MoCA is also part of the public-private coalition North Adams Partnership and helped pursue a state public works grant to remake the streetscape under Route 2. While the $6.8 million MassWorks grant didn’t come through, it signifies a more aggressive effort at improving urban design to make the museum and city more seamless neighbors.

It’s a mantle that MASS MoCA has taken up consciously, while its predecessor accomplished Main Street vitality without even trying. “I certainly do not recall a ‘purposeful’ plan that Sprague had to improve downtown, but because of the sheer numbers of employees, downtown was much busier and much more vibrant,” says North Adams Mayor Richard Alcombright.

Slowly but surely, however, the city of 13,000 is making a comeback. “I certainly think that we have become a ‘company town’ for art,” Mayor Alcombright continues, “Having lived here all my life and seeing many changes, I like this North Adams better than it was 30, 50 years ago.”

For the publicly owned museum, the unique economic model is also cause for optimism as it can benefit financially from the rise in real estate values occasioned by the transformation. “It’s rare,” Thompson concludes, “for an art institution to reap a dividend from its work.”