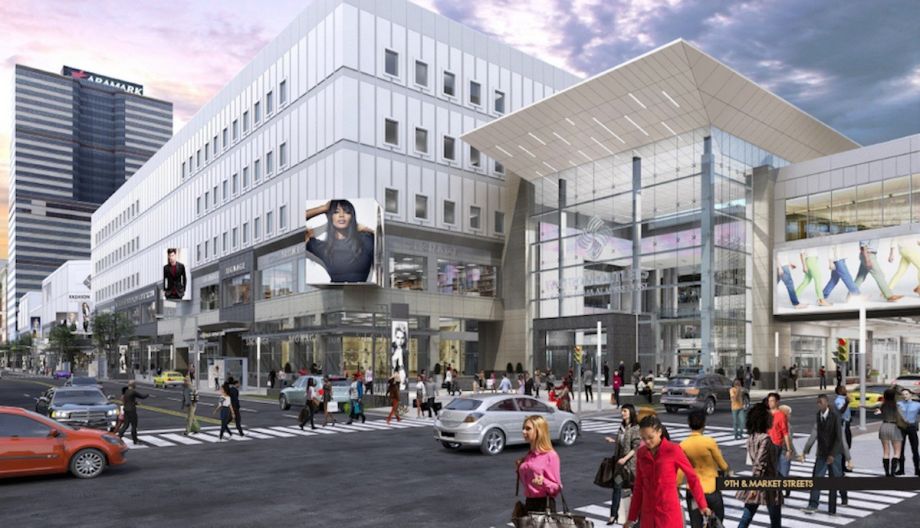 Traditional malls might be dying, but outlet malls are booming — and they’re headed downtown. According to Value Retail News 40 new outlet centers opened from 2006 to 2014 and over 150 retail chains plan to open outlet stores in 2015.

“There’s not a lot of opportunity for growth in the traditional sector,” says Neil Stern from retail consulting firm McMillanDoolittle. “Outlet malls clearly have consumer appeal, whether it’s recession-driven or recession-fueled, consumers continue to look for bargains and believe that they are getting them at outlet centers. That’s fueled a bunch of retailers and manufacturers who are creating concepts for these malls. With those things in place, developers build.”

The Pennsylvania Real Estate Investment Trust (PREIT) and Santa Monica-based Macerich Company are in the midst of moving ahead for a $325 million complete redevelopment of the Gallery Mall in downtown Philadelphia. It will be transformed from its current format as a traditional indoor mall to a downtown outlet center called Fashion Outlets of Philadelphia.

“One of the key goals for the Gallery is to benefit from its location as being in the center of the most historic square mile in America,” says Kevin Feeley, a spokesperson for PREIT. “Philadelphia gets about 40 million tourists a year. That’s a big number. They are a combination of conventioneers, business travelers and a big chunk of them are leisure travelers.”

The Gallery was once considered a “smashing success” both for its suburban-style design and as an economic driver for downtown Philadelphia. As times have changed (inward-facing is out, street permeability is in), the Gallery has been criticized for its hulking appearance and lack of retail diversity. It lost major anchor tenants in the 2000s and its major draws became “urban” streetwear and sneaker stores. It also developed the unfortunate reputation for being an unappealing and alienating place for consumers outside of a low-income customer base of people of color, who were still keeping foot traffic high.

To this point, Feeley emphasizes a statement made by PREIT CEO Joseph Coradino about the goals for consumers of the new concept: “We’re not looking for different customers. We’re looking for more customers. We want the Gallery to be a place where everyone feels welcome.”

Before the Great Recession, outlet centers were intentionally built in suburban areas outside of cities. Land tends to be cheaper and retailers had incentives to avoid competition with department stores and full-price locations in urban areas.

“The retailers themselves had considerable influence over the brands and could tell them, ‘I don’t want your outlet product near my retail store,’” says Stern. “I think what they’re finding is that it’s still a bit of a different customer who’s shopping at an outlet than a full-line department store.”

Stern says that outlet malls began as places where retailers sent true clearance products, but because outlets have grown so fast “there’s not enough clearance product in the world” to sustain them. Suppliers have begun to make “made-for-outlet” products. In some cases they are made in the same style or pattern as retail products, but they might have slightly fewer details, are made from poorer-quality materials or are put together with less meticulous construction.

In 2013, Macerich developed Fashion Outlets of Chicago. Located in a suburban setting, it’s accessible to downtown Chicago by public transportation. In May, it was announced that the outlet center has been so successful in its two years that the facility would expand with another 300,000 square feet — adding to its already 130 stores. Macerich also owns the Fashion Outlets of Niagara Falls, USA and is developing the Fashion Outlets of San Francisco at the former site of Candlestick Park.

In Philly, the city council is working with PREIT and Macerich to adopt a package of six ordinances that would move Fashion Outlets of Philadelphia ahead. They include a 20-year, $55 million Tax Increment Financing (TIF) package.

Two stumbling blocks for negotiations on the package in late May were over current Gallery kiosk tenants getting space in the new outlet center, and whether retail tenants would provide workers with a living wage.

According to the Philadelphia Inquirer, one councilman questioned Coradino’s vision to transform Philadelphia, asking, “Are you going to do that through poverty-wage jobs?”

Coradino responded that PREIT employees (such as security guards and maintenance workers) will be paid 1.5 times the state and federal minimum wage of $7.25 an hour, but that individual retailers couldn’t be required to do the same. City Council is expected to approve the measures this month.

As for whether there’s enough consumer demand for the downtown outlet mall, Americans have exhibited that they overwhelmingly welcome outlet and off-price stores.

“Are consumers getting a bargain by shopping at outlets? The important things is that they think they are,” says Stern. “To some degree that’s all that matters.”