No Sun, No Soil, No Problem: Eat an Indoor Farm Salad – Next City

No Sun, No Soil, No Problem: Eat an Indoor Farm Salad 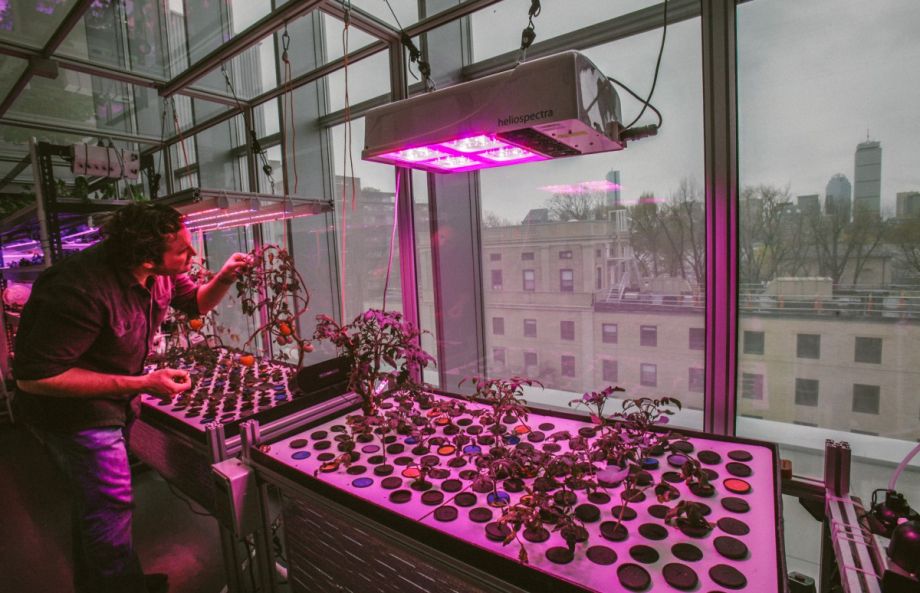 Take the elevator to the fifth floor of MIT’s ultra-modern glass-walled Media Lab, walk to the cafe, and you’ll come upon an eye-catching spectacle: a profusion of greenery growing under red and blue LEDs. Up close, you’ll notice more juxtapositions of high-tech equipment and unruly life: a digital timer and mist-spraying pumps; ladybugs crawling on stems of the crops, which include broccoli, strawberries, tomatoes, lettuce and peppers. “You can get ladybugs from Amazon,” marvels Caleb Harper, the tall, affable research scientist who cares for the plants with semi-paternal affection.

This prototype is part of MIT’s CityFarm project, which Harper founded about eight months ago. The project’s last harvest fed the entire Media Lab (a collective of research groups consisting of several hundred people). If Harper had his druthers, similarly cultivated crops would eventually end up on plates throughout the Boston metropolitan area. “It will be a significant part of the food ecosystem for the future,” he predicts.

Though the concepts of urban and vertical farms are not new, they’ve been gaining momentum recently. And CityFarm’s method — “aeroponic” agriculture — is a particularly innovative approach. As opposed to conventional soil-based crops, or hydroponics, which sit in troughs of water, the roots of aeroponically grown crops just hang in the air below the plants. Hidden by a shiny heat shield, the roots are long and tannish-white, messy and hairy; when Harper lifts the heat shield to show me, they look a little naked. They are periodically misted with water that contains carefully doled out nutrients: phosphorous, nitrogen and potassium, as well as micro-nutrients such as copper and magnesium.

At the beginning of the process, Harper places a seed in a thermoset plastic cube, and lets it germinate in a dark closet space, mimicking conditions underground. When it’s ready, it graduates to the fifth-floor space, where it receives both natural light and, automatically coordinating with the available sunlight or lack thereof, LED light.

The most widely appreciated virtue of urban agriculture is that it’s grown at the point of consumption, eliminating the need to ship long distances (and the associated emissions). Proximity also means greater nutritional value — Harper claims his crops boast twice the nutrient density of conventional produce — because there is no need to pick fruits or vegetables before they’re ripe. Less spoilage is another plus.

But proximity isn’t the only advantage of aeroponics, which was pioneered by NASA in the 1990s to grow crops on spacecrafts. Harper claims that his method is currently 70 to 90 percent more water-efficient than conventional farming, with the potential for that figure to rise to 98 percent, and that his plants grow significantly faster, too. Because they’re indoors, they’re also less vulnerable to pests. Harper has occasional aphids and spider mites, but uses nothing more noxious than ladybugs for pest control. And more broadly, the environment is simply more susceptible to management than an outdoor farm. “The lights are attuned to exactly what they want,” says Harper. The plants are misted approximately every five minutes to keep them constantly growing. Also, of course, the temperature is controlled, meaning no seasonal restrictions on growing.

How do plants grow without soil? Through the mist, Harper is able to give his plants the minerals and nutrients they would get from healthy soil. And most soil, unfortunately, is suboptimal: It’s depleted or contaminated or both.

Indoor farming sounds, at first blush, like a second-rate fallback option; perhaps it’s necessary, but it means forgoing the natural abundance of the elements outdoors. When Harper describes it, though, those elements sound more like uncooperative troublemakers. Reviewing the advantages he enjoys compared with his hypothetical counterpart out in the fields, Harper says, “The reason he uses chemicals, pesticides and genetic modification is that he can’t control anything. It’s windy, there’s not enough minerals. He tries to take that plant and any way he can make that plant a super plant to survive in an adverse world.” By contrast, “I’m trying to create a perfect world. So the plant can do what it’s good at, which is grow.”

Vertical agriculture is one of those causes that tend to attract passionate boosters. Dickson Despommier, director of Columbia University’s Vertical Farm Project, is one of the most prominent. In a recent conversation, he made the same point as Harper more pithily: “Indoors you can control everything. Outdoors you can control nothing. What’s better? Duh.” The Vertical Farm Project’s website makes indoor farming sound like a veritable panacea.

In addition to CityFarm, there are a number of experiments under way. Several companies — AeroFarms, Tower Gardens — have designed systems for growing aeroponics. Chigago’s O’Hare International Airport has an aeroponic garden. But what are its drawbacks, and what’s keeping aeroponics from scaling up?

According to Joe Nasr, who teaches urban agriculture at Ryerson University in Canada, one disadvantage is its very sophistication: “It requires a certain level of technical capacity, usually,” he said. “For the masses it’s less likely to be embraced widely… . You can’t ask your neighbor to garden your plants when you’re away for the weekend.”

There are also limits on what can reasonably be grown this way: The method is most suitable for leafy greens and other relatively light fruits and vegetables, much less so for, say, squash, corn, wheat, or rice.

In terms of the barriers to scaling up, it’s probably partly a matter of time, according to Nasr — the technology is still young, and Harper and other researchers are still refining the technique. Now it can still be expensive, because of the cost of the equipment, and competing with subsidized conventional agriculture could be hard. There are also unanswered questions about where, in cities where real estate is at a premium, all of these farms would go. Urban farmers in some cities may even face legal obstacles.

Still, it seems likely that this approach will continue to expand — not necessarily to the extent imagined by its most vehement adherents, but to fill one niche among many in the agricultural world. Standing next to Harper, it was tempting to buy into his vision of a food system integrated into the fabric of the city. “If you imagine a grocery store below us,” he said, “that’s a hell of a lot different from getting your tomatoes from a hothouse in California.”