A City Employee Walks Into a Podcast Studio ... – Next City

A City Employee Walks Into a Podcast Studio ... 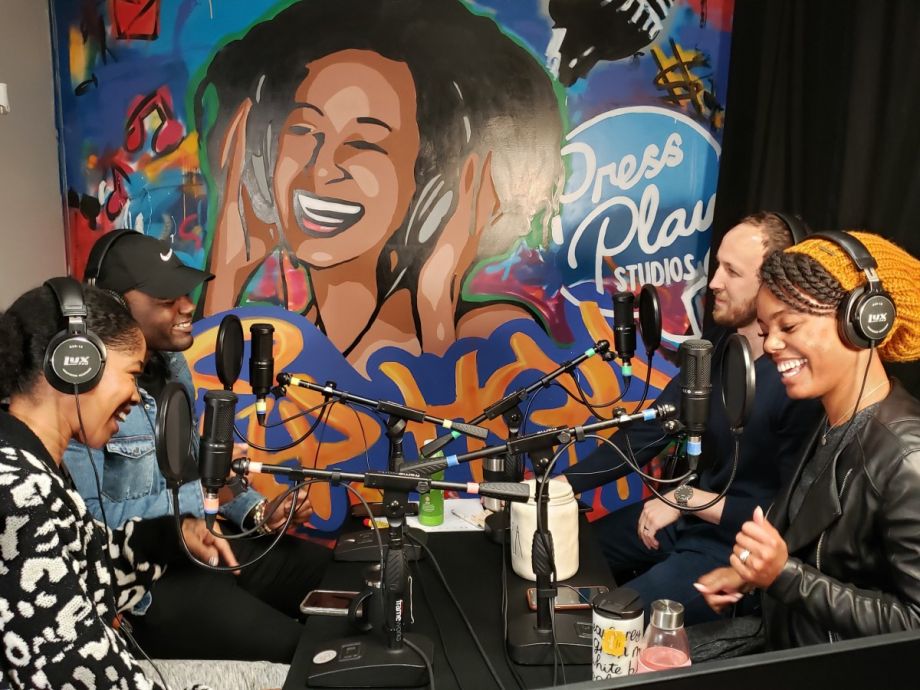 Editor’s note: Next City is covering solutions and challenges in Greensboro ahead of hosting our 2020 Vanguard Conference in the city. Applications are now open.

Podcasts have become ubiquitous, and Josh Sherrick, the city’s arts and events superintendent and self-proclaimed “podcast-o-phile,” figured they could help the City of Greensboro, North Carolina. Sherrick saw podcasts as a different way to engage with Greensboro arts and culture fans as well as a new way to use the city’s Cultural Center, a city-owned building that houses 16 local organizations focused on visual and performing arts. Sherrick connected with entrepreneur Brody Cohen-Glaze, who was already planning on launching a podcast production studio, and the pair negotiated a deal that has enabled Greensboro to carve out its own space in the podcasting world.

In 2017, Cohen-Glaze built a wall in the cultural center and took over the area used to hold vending machines to build Press Play studio, which offers space and technical assistance for people who want to record a podcast. While Cohen-Glaze was responsible for renovating the space to hold the studio, he also received a break on the rent. Sherrick allowed the studio to operate without paying rent for the first three months.

“I’m not entirely certain [that] … our ability to produce podcasts and do what we do would be possible” if not for the deal struck between the city and Cohen-Glaze, Sherrick says. Cohen-Glaze says that because he had a full-time job when the deal was struck, he was able to pay for the renovations without taking out a loan. Today, Cohen-Glaze’s podcast studio still pays a “much-below market-value” rent, Sherrick says. In return, the studio provides reduced-rate podcasting services to city agencies and free services to the nonprofits in the cultural center.

Most groups in the cultural center have been slow to take advantage of the podcasting offer, but a couple of city agencies have. Two shows that illustrate the medium’s potential are Gate City Chatter, which focuses on arts and cultural events in the Greensboro area, and History Notes, from the Greensboro History Museum.

Sherrick says the Gate City Chatter podcast has more than 500 episodes. “We’re well over 5,000 download/listens,” Sherrick says. The average listens per episode number between 300 and 400, he says. “We are a very local podcast, talking about the creative people and cultural happenings in Greensboro,” Sherrick says.

The podcast doesn’t garner tens of thousands of listeners, but Sherrick says other, similarly local podcasts garner a few dozen downloads. “We’re actually doing really well in this space that we are in,” he says. “The engagement that we get from our listenership, that is really important for us,” Sherrick says. He notes that there are people from various parts of the U.S. who listen, as well as a consistent listener in, for some reason, Ireland.

Rodney Dawson is the curator of education at the Greensboro History Museum, and he says he saw the podcast as a way to fill a need for area teachers. “Coming from teaching, one of the things that wasn’t one of my favorite things was developing lesson plans,” Dawson says. “So, I was looking for tools a teacher could use to develop a lesson plan.” Dawson’s History Notes podcast began airing at the beginning of this school year. The first season will include 20 episodes.

One episode Dawson highlights features a local educator who brought aerospace education to the district. “Back in the 80s, they had an educational space program,” Dawson says. “She was one who went to NASA and was trained, and she helped bring the moon rock program back to Guilford County Schools back in the mid-80s,” Dawson says. That program lent rocks brought back from the moon to schools and museums for classroom lessons. The episode describes the steps this woman had to take to obtain security clearance and enter the training program as well as some of the measures taken to protect the moon rocks brought to the schools for students to study. Another History Note focuses on the integration of Durham County schools.

Another production underway comes from the county Registrar of Deeds, Jeff Thigpen. His office handles vital and property records for the county. While the office gets joyous visits for marriage and birth certificates, deep emotions surround death and dying. Thigpen says that often when people come into his office for death certificates, they are “fighting through grief and sometimes dealing with innumerable questions about how to resolve estates. Notifying people, choosing a funeral home. How much it all costs. Veterans having questions about resources that could be there for them in terms of grief and mourning.”

These questions and issues prompted him to create the “Good Grief” podcast. “Nobody has gotten out of life alive,” Thigpen says. “How we talk about this is really important. I mean, we have to be serious, but the idea is of normalizing [death] and saying ‘Y’know what? We should talk [about it] and not feel ashamed or deny it.’” Thigpen says that funeral costs shouldn’t push families into bankruptcy and says he’d like to cover alternative arrangements, such as green burials, which allow bodies to decompose naturally, in one episode.

For Sherrick, the project has had to overcome challenges such as a lack of familiarity with the podcasting medium and the idea of on-demand listening. “There is a large learning curve for getting into the space,” Sherrick says, noting that different age groups and demographics have varying levels of experience with podcasts. “I think what [Cohen-Glaze] learned early on is that you can’t assume that people know the value of what you’re doing,” Sherrick says.

In his first year, Cohen-Glaze says he invested roughly $18,000 running the studio that he didn’t earn back. However, because he had a full-time job, he was able to continue with the studio. Cohen-Glaze hopes that as people grasp the value of podcasting, his business will grow and prosper. Meanwhile, he says, the podcasts are opening up new paths for local arts organizations. “I think Greensboro is really thinking about how can different organizations help support the arts instead of these five or six big [foundations],” Cohen-Glaze says.