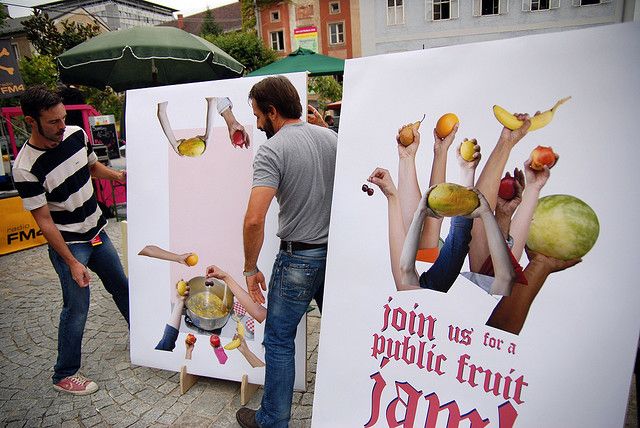 Near the bottom of the home page of the website of the Los Angeles-based art collaboration known as Fallen Fruit, two sentences sit cropped from the bible – Leviticus 19:9-10, specifically. The text is layered on top of a wallpaper collage of oranges, lemons, pomegranates and other delectables that were photographed after being gathered from public places in an L.A. neighborhood.

The biblical text also appears on the site underneath various news announcements regarding Fallen Fruit’s eatLACMA – “a year-long investigation into food, art, culture, and politics” at and around the Los Angeles County Museum of Art. And, the text appears below a video of a young woman looking into a camera while peeling and eating an orange – part of Fallen Fruit’s “Show Us How You Eat” project, a part of eatLACMA.

That text – published in a ye olde font that would be as at home in an illuminated manuscript as thrown up on a neighborhood wall – reads:

The citation – rendered on the site sans its usual “I am the Lord your God” appendix – does well to explain the land use, social, political, and creative liturgy of David Burns, Matias Viegener, and Austin Young, the three men who work together so effectively as Fallen Fruit.

FF’s website describes the trio’s work like this: “Using fruit as our lens, Fallen Fruit investigates urban space, ideas of neighborhood and new forms of located citizenship and community. From protests to proposals for new urban green spaces, we aim to reconfigure the relation between those who have resources and those who do not, to examine the nature of & in the city, and to investigate new, shared forms of land use and property.”

Fallen Fruit are well known for successfully going after a proverbial low-hanging fruit – i.e. actual low-hanging fruit. The trio have made maps, led tours wearing matching jumpsuits, conceived and executed a bunch of fruit-related public revels, and time and time again creatively cajoled once-wary Angelinos to pick and eat that which grows abundantly, hidden in plain sight, all around them. Fallen Fruit has been particularly adept at transforming the way many people now regard those sweets and sometimes sours that dangle across private property lines and into a sort of sidewalk air-space limbo.

Fallen Fruit’s explorations have brought them as far as supermarket grapes and bananas can travel. The men have done residencies in countries including Norway, Holland, and Columbia. Meanwhile, back home in Los Angeles, their most prominent work yet is scheduled to conclude on Sunday, November 7, 2010. That’s wheneatLACMA will wind down with, Let Them eatLACMA – a nine-hour fruitapalooza featuring both a telling title and if all goes as expected, a typically celebratory and community feel.

For Let Them eatLACMA Burns, Viegener, and Young have invited 50 or so other artists and artist groups to present fruit-related projects and performances at the west’s most encyclopedic art museum. Some of the participants will show off the gardens they’ve been cultivating since springtime. Others are planning pieces ranging from tomato fights and watermelon eating contests to a Salome-style seduction and a reading of Plato’s Symposium. Participants include a who’s-who of City/Culture regulars, such as Islands of LA. (Also, see what Machine Project organized.)

Last spring, in the early days of eatLACMA, Fallen Fruit walked LACMA’s grounds with the City Culture columnist, pointing out what were then the seeds of gardens, as well as other provocations and contemplations. Settling down on the soft earth adjacent to work by the National Bitter Melon Council and DidierHess (of Materials & Applications fame), Burns, Viegener, and Young expanded on how, why, and what they do. Some highlights from the conversation include:

Dave Burns: “I think the relationship of the city to food is changing now. Up until the ’80s, food was regional and seasonal, and now it’s global. And the purpose of the city has changed so radically the past 100 years in North America.”

Austin Young: “That’s what we talk about as a project – planting the perimeter of public spaces so our cities can become like community gardens.”

Austin Young: “That’s one of the reasons I love Fallen Fruit. It addresses three different parts of this issue. We talk about planting fruit trees, giving them away at fruit adoptions; then we talk about harvesting; and then we use jamming as the idea of using the fruit.”

Dave Burns: “It’s also about creating different kinds of agency and different kinds of community. Collaborating with space is a lot of what we’re doing; and we’re asking citizens to be active in authoring where they live, and taking a particular neighborhood and transforming it.”

Matias Vieneger: “In the maps [we make], its really important to us that the locations are approximate. Because we really want people to walk down and know somewhere on the street is a peach tree – but where is it? And look at everything else before they find the peach tree. It’s a whole way of getting people to look at cities and neighborhoods in a way that they don’t usually do.”

Next Week: Much more from Fallen Fruit.