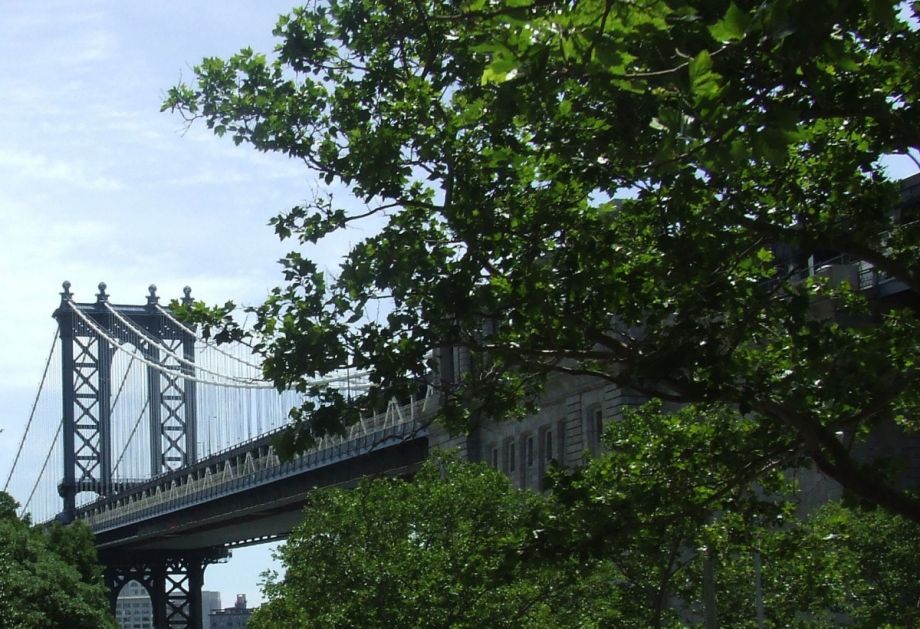 A Columbia researcher was inspired to study cyclists and air pollution after commuting by bike over the Manhattan Bridge. (Photo by Laslovarga)

Darby Jack, an assistant professor of environmental health studies at Columbia University, rides his bike to work. Because he lives in Brooklyn, that means riding the Manhattan Bridge into the city. “You’re on a protected bike lane between two lanes of traffic,” he says. One day, approaching the bridge on Sands Street, he was riding right next to a sanitation truck; it was spewing exhaust. As Jack breathed in, he thought, “That was a big lungful of smoke right there.”

That inhale has led to a study that will recruit New York bicyclists to use a sophisticated blend of sensors to measure personal exposure to air pollution.

Jack’s primary research is about the health effects of air pollution in low-income settings. He’s been looking at how much pollution, for instance, women inhale while using cookstoves in Ghana, and he had been trying to convince the women in that study to wear small monitors that would track, in real time, the amount of pollution they were being exposed to. After his ride alongside a garbage truck, he started to wonder how much air pollution he was sucking in on his commute, and he thought that it might be fun to wear one of the devices himself.

What he found, just from collecting some preliminary data, was intriguing. While baseline levels of air pollution in New York City aren’t particularly high, for a cyclist, at some points in a ride, there might be spikes in exposure, either from proximity to pollution or from the cyclist’s fast, heavy breathing. “The average exposure is not particularly high,” says Jack. “But there are peaks that reach levels that we think are harmful to health.”

Around that almost serendipitous insight, Jack and his collaborators (who include his Columbia colleague Steven Chillrud, who describes himself as “an environmental geochemist interested in public health”) are now building a research project that could show the potential health risks of cycling in an urban environment. The project will also test the use of a system of sensors to measure, with unusual specificity, the amount of air pollution individuals might be exposed to. In the spring, the team was awarded an NIH grant, worth more than $250,000, to build on their initial work, as part of a program to demonstrate the efficacy of prototype devices for assessing environmental exposures. And this summer and next, they will recruit (in partnership with New York’s local NPR station) dozens of New York City cyclists to take part in the initial phase of research — to establish whether it’s possible to better measure the specific impacts of air pollution on people biking (or jogging or skateboarding) through the city.

For the most part, measuring people’s exposure to air pollution has required making rough estimates. Especially in large studies, estimating the dose of a dangerous particle meant relying on stationary pollution monitors and extrapolating those readings to people living in the same area. But though those sorts of measurements can give a good idea of whether a population as a whole is being impacted negatively by pollution, they don’t give much detail about the relative risks of living by a busy road, say.

But, recently, new technologies, like the ones that Jack and his colleagues are using, have made it possible to more specifically estimate the exposure of one particular person.

“Personal exposure assessment is a notion that’s coming into its own,” says Jack. “It’s not really clear whether it would be feasible to deploy these devices in one of these big studies, but it’s an intriguing idea. And even if you can’t deploy it on 10,000 people, you might be able to use it to create models to predict people’s exposures.”

The cycling project involves a few different sensors. Some measure the pollution; others measure the biometric data of the cyclists — his or her heart rate and respiration rate. The first sensor — the one that Jack first strapped on after that day on Sands Street — is a gray box about the size of a man’s fist. In the past, personal air pollution monitors like this one would have only been able to measure the dose of pollution over the full period the person was wearing it; the MicroPEM (which is made by the research company RTI International) can log data every 30 seconds. It also measures the average concentration of the types of particles that are flowing through, and that information can be used to adjust, minute by minute, the time-stamped data, to account for the kinds of particles the person was encountering. Another monitor measures black carbon, to indicate source of the pollution. (Mostly, in this context, it’s from combusting fossil fuels.)

Jack and his colleagues are measuring the cyclists’ exertion in two different ways too. First, the cyclists are wearing a Hexoskin biometric shirt, designed for high-performing athletes trying to squeeze more efficiency from their bodies. There are sensors in the fabric that measure how the wearer breathes in and out — how fast and how much — as well as heart rate and recovery. On top of that, Chillrud and RTI have worked to build an accelerometer into the MicroPEM and shown that data from that sensor, combined with some basic information about the rider, can also reveal how much effort a person is exerting. (Part of the study’s purpose will be to compare the usefulness of different sources of data.)

The point of all this technology is to understand, in detail, what danger people might be exposed to while they’re moving through the city — and how to mitigate it. “The public health policy ramifications have to do with infrastructure design and perhaps personal behavior,” says Jack. With enough data, the researchers could, for instance, create a map that flagged the most dangerous corridors in the city (heavily trafficked hills, perhaps) and allow cyclists to plan routes around them. But, says Jack, “it really should inform urban design and thinking about ways to design car and bicycle infrastructure to minimize exposure.” Maybe, for instance, a bike lane onto a key bridge shouldn’t go between two lanes of traffic. Certainly, the potential health impacts of pollution could be one factor in deciding the location and design of new infrastructure. After all, it doesn’t make sense to encourage people to cycle as a healthy activity if they’re just breathing in fumes.