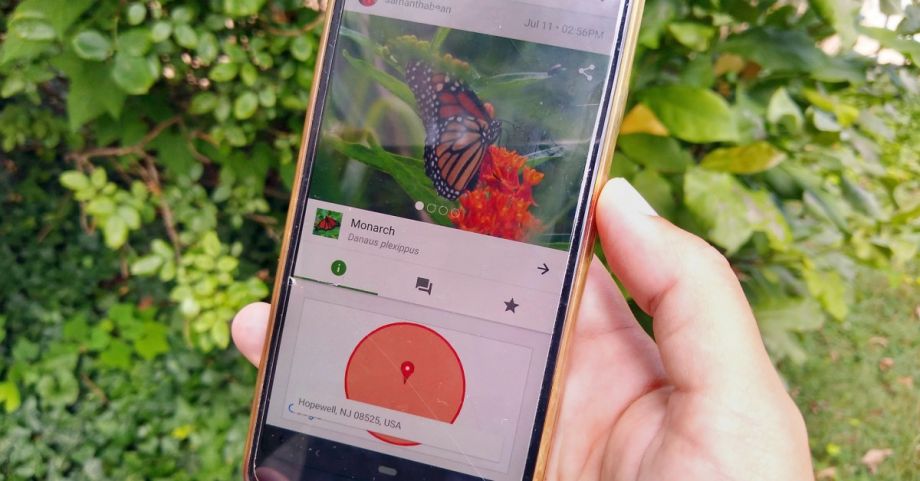 An iNaturalist user checks out a previous monarch butterfly observation made as part of Tally the Valley. (Photo by Rachel Kaufman)

Every summer, New Jersey-based nonprofit Friends of Hopewell Valley Open Space (FoHVOS) hosts a butterfly count. Volunteers gather on the nonprofit’s meadow trails to identify and record all the specimens they can, to be submitted to the North American Butterfly Association’s database.

The goal: monitor butterfly populations and increase public awareness about the importance of pollinators, whose numbers have been declining, to the health of local ecosystems. This year, FoHVOS decided to cap participation at 10 attendees, to limit the risk of transmitting coronavirus.

But to offer an option for those who can’t join in person, the FoHVOS team brought the event to community members’ cell phones. Through a program dubbed Tally the Valley, participants use iNaturalist— a free mobile app — to photograph and upload butterflies, along with a GPS tag, in Hopewell Township. Other participants, and even experts, can then weigh in to help identify the species.

But Tally the Valley won’t stop at butterflies. Once the first phase of the program wraps up, FHVOS will ask participants to track different species of plants, animals or insects. (A more detailed announcement will come later this year.)

Launched on June 20, Tally the Valley has netted over 200 observations so far. But Logan Horvath, program manager at FoHVOS, says those numbers are increasing by the day.

According to Horvath, Tally the Valley has a dual purpose. It’s meant to recruit neighbors to collect biographical data that will guide efforts to boost biodiversity and species populations in the area. But it’s also meant to keep Hopewell residents entertained and engaged with nature through quarantine.

“In the very beginning of COVID, we realized there was a feeling of loss and, ‘I don’t know what to do, I don’t know how to help, how can I benefit society?’” Horvath says. “You’re stuck in your house, everyone is down and depressed. Let’s get outside and figure out how we can make the pollinators happy.”

Tally the Valley is the nonprofit’s latest virtual venture into citizen science — a term used to describe research, data collection, and conservation driven by curious community members, rather than expert biologists.

iNaturalist has long been a go-to tool for nonprofits and conservationists across the globe to make citizen science as simple and accessible as possible. But Carrie Seltzer, stakeholder engagement strategist at iNaturalist, says more and more organizations like FoHVOS are leaning on the app to launch online, socially-distanced versions of BioBlitzes and other community conservation projects during the pandemic.

“People don’t have to come to one particular park, but the call to action can be, ‘Wherever you are, go outside, stay distant from others, but look at the plants and look at the bugs that you find and take some pictures and then share them,” Seltzer says.

According to Horvath, Tally the Valley was inspired in part by the enthusiastic response to another of FoHVOS’s quarantine-friendly projects: DIY bee abodes. FoHVOS planned to host workshops throughout March to teach residents how to construct habitats that would support the area’s endangered bee population, which has declined due to biodiversity loss, habitat destruction and widespread pesticide use.

Scout troops, businesses, and residents had signed on as eager volunteers and partners, and local schools even pledged to integrate the project into science curriculums. But the workshops were cancelled to comply with stay-at-home orders.

Instead, FoHVOS decided to sell kits online that could be shipped to residents’ homes and constructed with step-by-step directions. Participants placed the finished product on their doorsteps to be retrieved by FoHVOS staff and installed in a larger bee hotel structure built by Mercer County Tech School students.

The kits, which included sustainable materials like repurposed lumber and invasive phragmite plants, sold out quickly after going live in April.

“It was way more popular than we had anticipated,” Horvath says. “I predicted that we’d sell around 25. And in the end, I ended up sending close to 50.”

In Horvath’s view, that interest comes from boredom during quarantine. And for busy parents struggling to balance their jobs with childcare and homeschooling, the project seemed like a fun and educational way to keep kids occupied. She expects Tally the Valley to serve a similar purpose.

But she hopes that the program also fosters a love for the outdoors. She thinks the hands-on, creative nature of the bee abodes may have captured the imagination of artistically inclined neighbors who may not have been previously interested in the environment.

“Everything else has been shut down but the outdoors. Mother Nature hasn’t been shut down,” Horvath says. “So I think a lot of people, now that they had that opportunity to stop and watch, are a little bit more in awe of what’s going on outside.”

For example, to bring back the struggling monarch butterfly population, the nonprofit has accelerated its efforts to plant milkweed, a native plant that’s a favorite of monarchs, in its on-site meadows, as well as the rain gardens and outdoor classrooms they construct around the town.

But according to Horvath, the team needs all hands on deck. FoHVOS offers educational resources to encourage residents to plant their own pollinator-friendly gardens, as well as eliminate invasive plants and track struggling species. That’s where citizen science programs like Tally the Valley come in.

“We really seek to make sure that our lands are healthy, that people are healthy and the plants and animals all around are healthy,” Horvath says. “And the only way we can do that is working together.”

Horvath hopes that Tally the Valley draws people outside of their homes while in quarantine, to appreciate the beauty in their community.

“People get so caught up looking through their phone and saying, ‘Oh I want to go here to this beautiful blue lake,’” Horvath says. “Well, what about the lake in your backyard that is infested with invasive species? How can you help what’s right here to make it also beautiful?”

According to Seltzer, iNaturalist users are proving that citizen science is helping generate that stewardship and enthusiasm among those in quarantine — and on a global scale.

“We’ve gotten a lot of comments from people saying things like, ‘This has helped keep me sane during the shelter-in-place orders,’” Seltzer says. “We’re getting that feedback from all over the world. And so it’s been really encouraging to us to see that people are taking advantage of the opportunity to pay closer attention to what’s in their neighborhoods and in their backyards.”