Cities Want Green Spaces. Here’s How to Make Them More Fire-Resistant – Next City 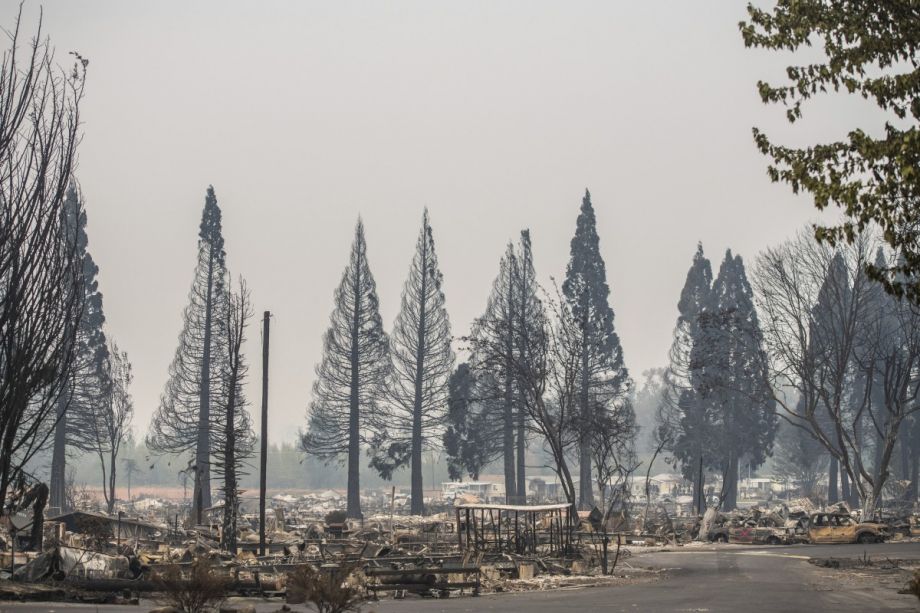 A general view of the aftermath of the Almeda Fire, in Phoenix, Oregon. Firefighters say that in addition to climate change, the beloved Bear Creek Greenway fueled the fire as it “hopscotched between wildland vegetation, the Greenway, adjacent fields, and neighborhoods.” (Credit: Chris Tuite/imageSPACE/Sipa USA(Sipa via AP Images))

With the rise of sustainable urban planning, greenways—linear, green spaces designated for recreational use, often built along waterways or decommissioned railroad tracks—have become a popular addition to cities worldwide. But in September in southern Oregon, the Bear Creek Greenway turned from a cherished bike path into a force of destruction, as the Almeda Fire traveled along it like a tunnel from its starting point in Ashland, through the towns of Talent and Phoenix, and into the suburbs of Medford, destroying thousands of adjacent homes.

The Almeda Fire started as a wildfire in an empty field on the outskirts of Ashland near the southernmost end of the Bear Creek Greenway, but it evolved into an urban conflagration as it “hopscotched between wildland vegetation, the Greenway, adjacent fields, and neighborhoods,” explains Chris Chambers, Wildfire Division Chief at Ashland Fire and Rescue. The same continuous strips of dense vegetation bordering the Greenway that have made the area popular among birdwatchers and bicyclists fueled the Almeda Fire, and high winds propelled it through populated areas.

Now, as neighborhoods in southern Oregon begin to rebuild, local experts look to restore and foster fire-resilient native ecosystems to mitigate the risk of fire in the future. They know that mitigating fire risk is more important than ever, as fire season continues to grow longer and more volatile as a result of climate change.

“Climate change is pouring gas on everything,” Chambers says. “Things are getting drier and drier, and the window of opportunity for fires to burn is getting longer and longer every year.” The Almeda Fire is only the latest example of an urban conflagration that was aggravated by climate change and spread through well-populated areas. The Camp Fire, which destroyed more than 18,000 structures in northern California in 2018, also spread due to hot and dry weather and strong winds.

Because the Bear Creek Greenway snakes through multiple municipalities, each with somewhat different strategies for managing vegetation, the Almeda Fire presents a case study in what works and what doesn’t when it comes to managing vegetation to mitigate fire danger. Chambers says that traditional firebreaks, which are strips of open space meant to stop a fire from jumping between areas of vegetation, “really didn’t make any difference” to the spread of the Almeda Fire as strong winds pushed sparks and embers up to a mile ahead of the flames. Other human-made urban firebreaks, like crossroads and overpasses, also failed to stop its spread.

But, in parts of Ashland, where a nonprofit organization called the Lomakatsi Restoration Project has partnered with the city to restore native ecosystems, the Almeda Fire burned at a much lower intensity, making it less destructive, less dangerous to fight, and slower to spread into adjacent neighborhoods. Lomakatsi has been working along sections of Bear Creek for more than 20 years, long before the Bear Creek Greenway was even established. The organization’s partnership with the City of Ashland began in 2006. “Our mission is to restore ecosystems,” says Marko Bey, executive director and founder of Lomakatsi. “Our focus along the Greenway has been ecological function, stream and watershed health.”

The most significant challenge to restoring native ecosystems along Bear Creek has been cutting back dense thickets of invasive Himalayan blackberries, which grow up to twenty feet tall in some areas. Thinning these blackberries is also what made the largest difference to the spread of the Almeda Fire, Bey says. The more diverse, native ecosystems that Lomakatsi works to restore are also more resilient to fire.

While invasive blackberries may be unique to Oregon, Nicole Del Piso, riparian restoration manager at Lomakatsi, says that the strategy of thinning invasive species to make room for native plants is applicable everywhere. “The goal is to have a healthy native system,” she says. Lomakatsi also works in northern California, where the organization faces other invasive species like Scotch broom and French broom, which are also highly combustible. “This is a model that could be extrapolated anywhere,” says Bey.

Where Lomakatsi thins invasive blackberries along Bear Creek, it plants native shrubs and trees, like snowberries, Oregon ash, and cottonwoods. Many of the cottonwood trees that Lomakatsi planted more than a decade ago survived the recent fire.

The Almeda Fire was contained after a week of what Chambers calls “heroic efforts” from fire crews and other emergency responders. A month later, he is eager to develop new strategies to ensure that a similar catastrophe never happens in the area again. The Lomakatsi Restoration Project will continue to play a vital role in vegetation management along Bear Creek, and Bey says the organization has already begun the work of evaluating damage along Bear Creek and reseeding using native seeds. “Systems are never static,” he says, “and now that fire came through, we have to look at the opportunity. We have to think about the ecosystem two hundred years ahead.”

Bey’s advice to other cities hoping to mitigate fire risk in green spaces is to do the same. “With ecological restoration and fire resiliency work, we need to be thinking long-term,” he says.