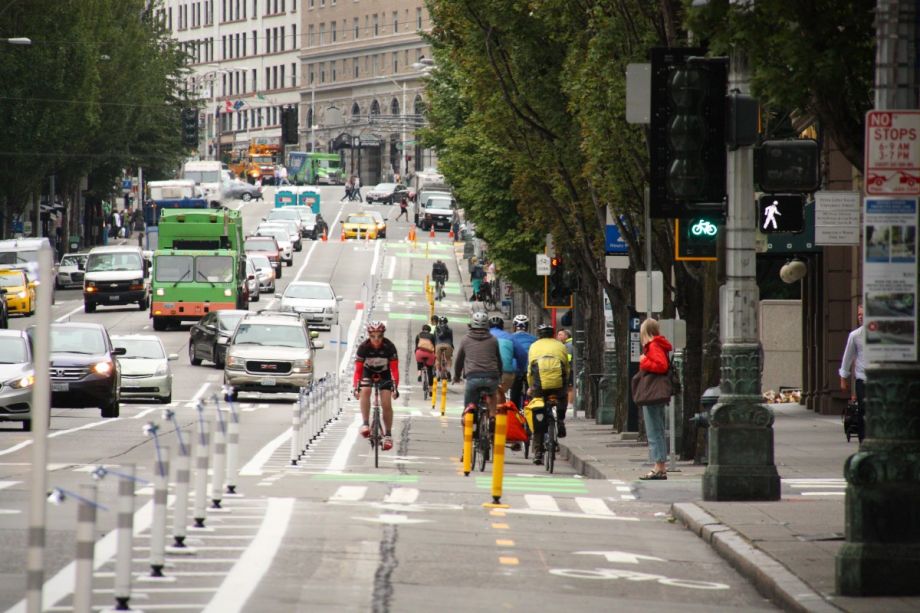 Late last month, the Seattle Department of Transportation began upgrading the Second Avenue “pilot” protected bike lane by replacing plastic bollards with planters, installing new traffic signals and raising the pavement at busy driveway crossings. Unlike the usual multiyear design, review and build process, SDOT took the Second Avenue project from design to installation in just four months. They used paint and easily removable plastic bollards and promised to fix or reverse any problems they encountered after the lanes were on the ground.

That approach is part of a growing trend among city DOTs to quickly design and implement demonstration projects that help advance their bike and pedestrian network goals and illustrate to the public exactly how new types of infrastructure work in the real world. Last week, PeopleForBikes released a new report, “Quick Builds for Better Streets,” looking at lessons from projects in Seattle, New York, Chicago, Austin, Denver, Memphis, Pittsburgh and San Francisco for other cities interested in replicating the concept.

“We observed that a bunch of cities were doing cool stuff and wanted to put a name on this trend, take the lessons about how to make these rapid changes, digest them a little bit, put them into some form of blueprint that another city could replicate,” explains report co-author Michael Andersen, PeopleForBikes Green Lane Project staff writer.

The quick-build trend grew out of small-scale tactical urbanism projects where activists would block off a street or paint their own bike lane or create a protected bike lane with cheap plastic bollards. It was a way to demonstrate to glacially paced bureaucracies that change could be fast and easy.

According to the report, a quick build is defined by four elements. It must be led by a city government or other public agency; installed roughly within a year of the start of planning; planned with the expectation that it may undergo change after installation; and built using materials that allow such changes.

Orcutt and Andersen drew on the experiences of cities experimenting with quick builds to come up with a list of ingredients required for success, which includes a designated team, a system for recognizing and taking advantage of opportunities, reliable funding, plans for speedily hiring contractors, impact metrics and more.

Andersen says their report is meant to help encourage cities to adopt quick builds as a potential tool. “It’s not going to be exactly right for every city, but we wanted to move things along and help people understand that this is a pretty solid trend,” he says. “It’s going to be useful.”

Quick builds have the potential to buck the status quo and energize would-be streets advocates in the process. “Right now the only people who are activated by changes in cities are people who don’t want change,” Andersen says. “Quick-build projects activate and give information and incentives to people who do want changes.”

Of course, there are shortcomings to rapidly accelerating a project’s timeline. The report points out two. Much the way the speed of delivery can energize those in favor of change, it can also spark increased ire on the anti side.

The report says, “Opponents see [this as a] railroading of an unwelcome agenda. The ability of a city to change details of such projects after implementation only partly alleviates concern about the overall goals.”

The second shortcoming Orcutt and Andersen highlight is likely more a product of the tool’s relative newness. They found that as of 2015, none of the cities using quick builds have a formal process in place for taking their projects from temporary to permanent. As such, there is some concern cities could shortchange bike and pedestrian projects by permanently leaving their quick-build projects in their beta testing stage.

But, Andersen thinks the strengths of quick builds far outweigh their potential problems. “Any project could go wrong, but you have to weigh that against the shortcoming of the status quo,” he says. “You can do these, change them, reverse them.”

He argues that on the ground experimentation makes quick builds a more transparent way to change streets. “Cities making changes out in the open is a more public process than doing a bunch of planning in air conditioned rooms. It is more equitable to require less time and knowledge to understand what changes are happening on the street.”