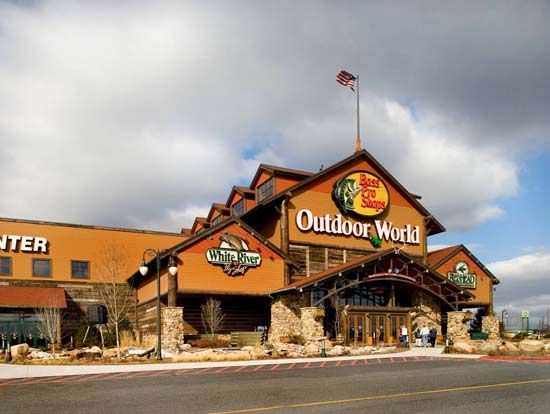 Bass Pro Shops is a store catering to those who love the outdoors. It sells fishing rods, boating equipment and firearms, including semi-automatic shotguns and Berettas. And according to a Monday Bloomberg News article, the company is worth at least $2.6 billion.

Which makes it all the more surprising to find out that Bass Pro is heavily subsidized.

As Bloomberg reports, the Public Accountability Initiative (PAI) released a report in 2010 tallying the subsidies received by the company at more than $500 million. These subsidies were given with the understanding that the megastores would create jobs and replenish local government coffers with new tax revenue. The non-profit researchers found that wasn’t always the case.

“Taxpayers in cities across the country have been left with high levels of debt and fiscal stress as a result of Bass Pro projects,” the PAI report noted.

The money isn’t exactly being drawn from cities with surpluses, either. Harrisburg, Pa. was reported to have paid $7 million in subsidies to draw Bass Pro in — though this is peanuts compared to prices paid by other cities. Still, Harrisburg doesn’t have $7 million to spare. The school board there recently approved the sale of one of its properties to deal with its $437 million debt (the expected sale price of $1.6 million would barely make a dent).

But Bass Pro isn’t there to help schools. It’s there to provide jobs. How’d it do?

The store arrived at the Harrisburg Mall and promised to add anywhere between 300 and 400 jobs. Three years later, in 2007, it employed 101 people.

It’s unfair, of course, to judge the store purely based on how many jobs it brought to the region. Another objective was to revive the struggling mall.

Yet according to a Monday article The Patriot News, a central Pennsylvania newspaper, the mall’s value dropped from $66.5 million in 2010 to less than $8 million today — or less than one-eighth the number it was three years ago. This plummet not only hurts business in the mall but also detracts from the revenue of the already hurting school district.

In Buffalo, N.Y., Bass Pro was meant be the anchor property in a $300 million redevelopment of the city’s waterfront. The plan, developed by the Erie Canal Harbor Development Corporation (ECHDC), set out $35 million in subsidies for the company to build there.

Bass Pro was essential to the project. As ECHDC chair Jordan Levy put it in a public forum in May 2010, “Without them we have to find another anchor. Without an anchor we will have a very difficult time building this project… I’d love to tell you that there is a Plan B, but I frankly would be lying.”

As foolproof as that sounds, apparently there were some faults. By July of that same year, Bass Pro President J.A. Hagale sent a letter to New York Rep. Brian Higgins saying that Bass Pro would withdraw from the project, citing that they “have in good faith expended significant time and invested well over one million dollars in working with ECHDC.”

While nine years of talks and development do seem excessive, $1 million in exchange for $35 million seems like it would have been a good deal. Today, the waterfront is mostly filled with restaurants and water-based activities like kayaking and sailing. ECHDC is introducing a $5 million lighting that should be ready by 2014. It aims to attract tourists with a daily 45-minute light show.

If missing out on that $35 million makes you fear for Bass Pro’s well being, this should alleviate your fears: In 2005, Mesa, Ariz. approved $84 million worth of incentives for its Riverview waterfront shopping center, anchored by both Bass Pro and Walmart. While the project did attract some new businesses, many of those simply moved in from surrounding areas — leaving their previous spots, many in the nearby Fiesta Mall, abandoned.

An editorial in the Arizona Republic at the time argued that the “critics were right when they said that Riverview would cannibalize retail from the struggling Fiesta Mall area, decreasing sales even more there.”

But again, there was the allure of job creation and commerce.

“I want to see Mesa bring in some real jobs,” former U.S. Rep. Matt Salmon, an important supporter of the development, said at the time. “I want to see us do some economic development and want us to stop losing these revenues.”

Others campaigning for the approval of these incentives claimed that the new Riverview shopping center would bring in $170 million in tax revenue within its first 30 years — around $5.7 million a year. In its first four years, the center has only averaged about $1.7 million a year.

This year Mesa announced that it had a budget shortfall of $8.5 million. To account for this the city had to raise garbage removal, water and sewer rates by 2 percent and add $2.2 million in secondary property taxes. The budget shortfall is equal to about five times Riverview’s average annual tax revenue and around one-tenth of the incentives offered to businesses there.