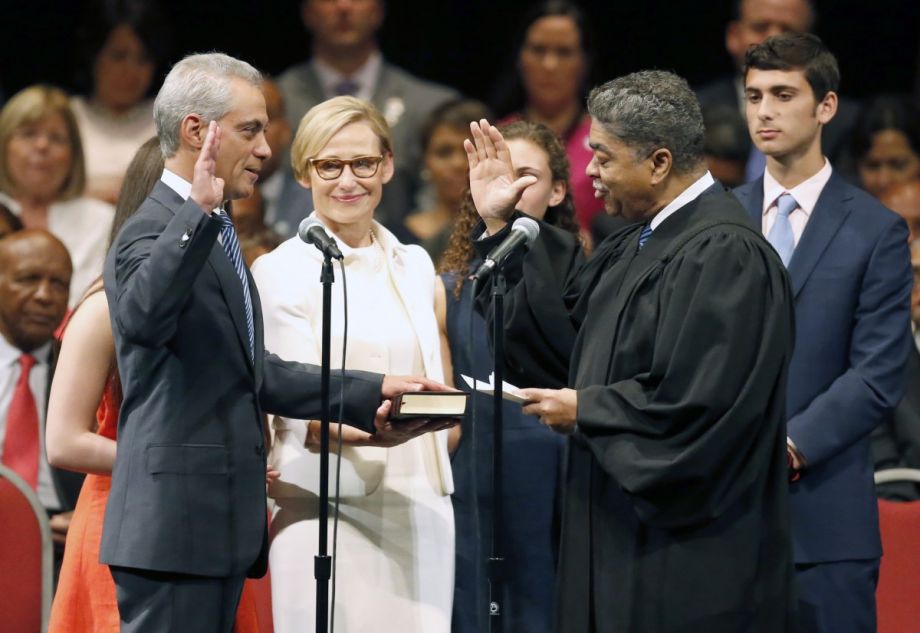 As he begins his second term, Chicago Mayor Rahm Emanuel is in charge of a city with a troubled credit rating. (AP Photo/Charles Rex Arbogast)

Last week, Chicago Mayor Rahm Emanuel was dealt a blow when credit rating agency Moody’s Investors Service reduced the city’s credit rating to junk status due to the city’s inability to provide major fixes to its crippling pension debt. Chicago’s pension headache is one of the worst in the country, but municipalities all over are struggling with ballooning retirement fund burdens.

An emerging cost-cutting option that has been gaining traction in municipal pension circles is to shift funds from pricey money managers to a more passive investment style via index funds.

Index funding is a strategy of investing where instead of hiring someone to actively pick and choose in the buying and selling of individual stocks and bonds, money is invested in a set mix of stocks and bonds intended to match the performance of a financial market, or index. These funds have become much more popular in the last decade of personal finance because they’ve been able to outperform actively managed funds, on average.

According to Morningstar, the percentage of individuals investing in passive-index matching in the mutual fund market has grown to 30 percent this year, up from 13.8 percent in 2004. Meanwhile, only 19.2 percent of public or private pensions have directed their public security allocation to index funds.

“The fees charged by index funds are so much lower than for active managers,” says Donald B. Keim, professor at University of Pennsylvania’s Wharton School. Keim recently co-authored the paper “Passive Investors, Not Passive Owners,” which details how companies whose stocks have a higher share of passive ownership have better governance indicators, have been proven to be less volatile, and have been more profitable in the long-term than those with active investors.

“Active management requires more work [for research and trading] and hence they charge their clients higher fees,” Keim continues. He adds that because active managers trade much more frequently, they incur higher trading costs on top of management fees.

The Montgomery County Employees Retirement Plan, in the suburbs of Philadelphia, shifted most of its $509 million in investments to index funds in 2013. The New York Times recently reported the shift has resulted in an estimated $1.3 million in savings in annual management fees.

“The differences in management fees and transactions costs between index/passive and active funds can easily be .5 to 1 percent,” says Keim. “When applied to the assets under management and compounded over multiple years, this difference can really add lots of value for the pensioners. … Seems like a no-brainer.”

Pennsylvania Governor Tom Wolf is currently exploring the idea of shifting investments in two of the state’s largest funds to passive investments. New York City Comptroller Scott Stringer has issued an analysis of the heavy impact that management fees have on five of the city’s pension funds — and how these fees are hidden from public view. Could investing in index funds be the right alternative to hiring expensive Wall Street managers?

“In the end, I believe it makes perfect sense for public or private pensions to direct their public security allocation to index funds,” says Keim. “They will earn an equivalent and quite possibly better return (before fees and expenses) than actively managed funds, and with lower costs.”