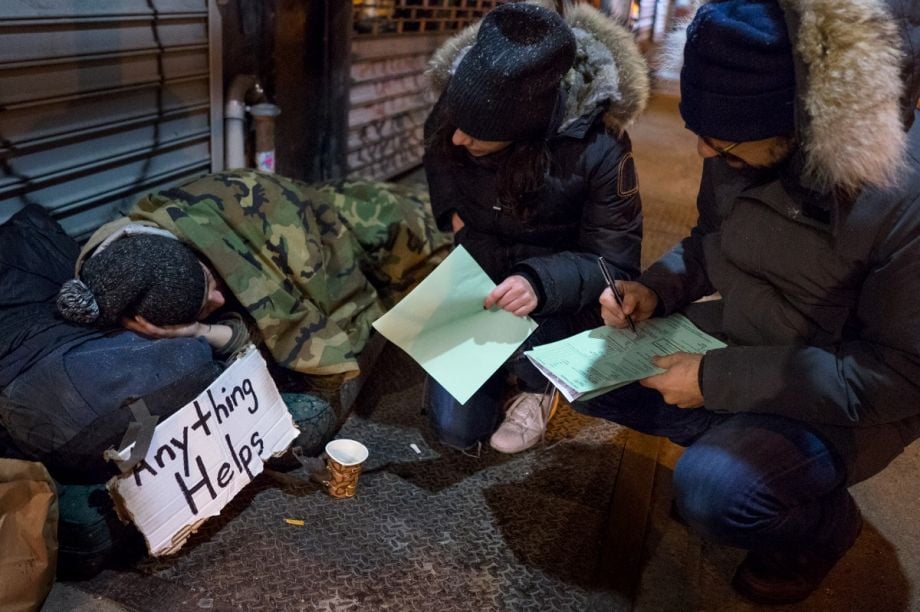 Surveyors speak to a homeless person in New York City during the city's winter count of homeless people in 2016. (AP Photo/Craig Ruttle)

Cities must stop criminalizing conduct that is “an unavoidable consequence of being homeless,” a federal appeals court ruled Tuesday. The ruling concerns sitting, lying or sleeping in public streets when no homeless shelters are available and will apply to cities in nine western states.

The Ninth U.S. Circuit Court of Appeals in San Francisco referenced the Eighth Amendment’s ban on “cruel and unusual punishment” in conjunction with city ordinances like the one in Boise, Idaho, that made it a crime to use sidewalks as camping places, the San Francisco Chronicle reports.

“Our hope, not just for Boise but for cities like San Francisco and cities across the country, is that it causes them to take a look at the laws they have on the books and have conversations about how to stop relying on those policies,” Eric Tars of the National Law Center on Homelessness & Poverty said recently, according to the paper.

But while the 3-0 ruling said that cities couldn’t completely outlaw sleeping on the streets, San Francisco may be able to skirt it — because it enforces what’s known as a partial ban. In 2010, 54 percent of San Francisco voters made it a misdemeanor to “sit or lie down on a public sidewalk, or on a mattress or other object on a sidewalk, between 7 a.m. and 11 p.m.,” according to the Chronicle.

The ruling also states specifically that cities cannot prosecute homeless people when shelter space is available. But some shelters have a cap on the number of nights a person can stay — others require that they be part of rehabilitation programs or make certain religious commitments, as the Los Angeles Times points out. In San Francisco, the city bans keeping tents on the sidewalks 24 hours a day. But before enforcing that ban, officials have to offer the homeless person shelter or a bus ticket to another city where “a friend or relative could provide housing,” according to the Chronicle. So that practice will probably be allowed to stand under the new ruling.

Another way that cities discourage homelessness (which is much more insidious, and unlikely to be touched by the courts) is by designing people away. From benches that can’t be slept on to green spaces surrounded by jagged fences, the practice of so-called “hostile design” is increasingly being used by city planners — even while it’s publicly shamed on social media.

What cities really need, of course, is a dedicated revenue stream to provide housing for homeless individuals. One San Francisco measure that would tax businesses like Twitter could bring in up to $300 million for homelessness prevention and affordable housing programs, as Next City recently reported.