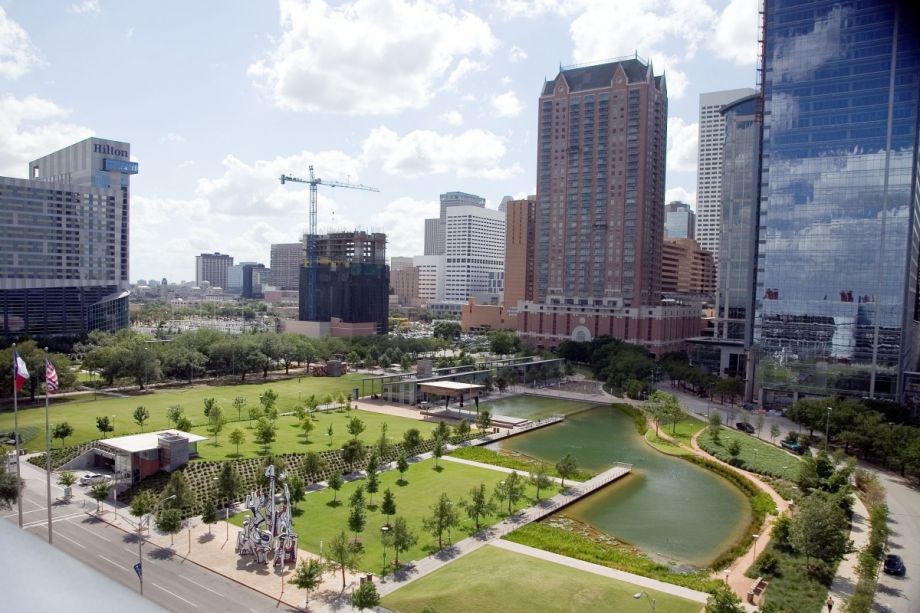 Discovery Green in Houston, where the city has taken a noteworthy approach to parks financing (Photo by David A. Brown Photography)

Even though the benefits of urban parks are widely acknowledged, municipal parks departments around the U.S. must grapple with tight budgets in cash-strapped cities.

In 2008, Philadelphia park officials estimated that the cost of operating the city’s parks was around $30 million per year, according to a paper by the Trust for Public Land. Philadelphia Parks and Recreation currently has an operating budget of $51.8 million, a figure that still leaves local advocates clamoring for more. “It’s foolhardy and short-sighted not to give this department what it deserves,” said Philadelphia Parks Alliance Executive Director Lauren Bornfriend last year.

The good news is that innovative park officials and advocates are thinking creatively and forging new ways to fund city parks.

In August, Seattle saw the landmark passage of Proposition 1, which established an independent Seattle Parks District with taxing authority.

“Really it was a city stepping up to levy taxes on an ongoing basis through a state-sanctioned mechanism,” says Thatcher Bailey, executive director at the Seattle Parks Foundation. The idea of a metropolitan parks district in Seattle had been long gestating, but it gained more support on the part of local parks advocates after the Seattle Parks Foundation led a study in 2012 on alternative funding options. The study argued that a new parks district would “reduce the strain on future city budgets.”

“The campaign was much more grueling than any of us anticipated,” says Bailey, referring to the tense debate over the ballot measure, with critics anxious that removing the need to renew parks funding by vote might be undemocratic. Still, Proposition 1 passed 53 to 47 percent.

Seattle now has a chance to back its green spaces with a source of unfettered funds and even catch up on a maintenance backlog. Bailey is careful to note that a metropolitan parks district may not be the solution for every city. It’s up to local parks champions to hammer out the funding models that work legislatively for them. The security of undiverted funds may be universally attractive though.

“Oftentimes when cuts need to be made, it’s hard for jurisdictions to justify making sure the ball fields get mowed when you have to make cuts to police and fire. It’s always going to be a tough political call. I think protecting the funding of the parks [matters], because in bad times, they’re even more important,” says Bailey.

Houston also has a noteworthy approach to parks financing. A 2007 statute completely changed how the city’s parks were organized. Houston’s Open Space Ordinance organized the city’s 656 square miles (for comparison, that’s larger than the five boroughs of New York City) into park sectors. It requires developers to include private or public parkland in their plans or submit a fee that goes into the park fund, and can only be spent within the same sector.

Since the 2008 fiscal year, fees paid by developers under the ordinance have totaled more than $17 million. From 2009, 21.5 acres of private parks and one acre of public parks have been created through new development, according to Houston Parks and Recreation.

“It’s one of the tools we’re using to turn our city green,” says Houston Parks Director Joe Turner. “It’s not the answer to everything because if you’re not developing in a sector, it’s not going to create sector monies. That means in our master plan process, those areas that aren’t seeing development [should be the focus] of our bond money, so every citizen has access to a park in a 10-minute or roughly half-mile radius.”

There are currently 21 sectors, which will each have their own master plan come next spring, says Turner. The department is consulting the Trust for Public Land’s ParkScore system to inform them of which neighborhoods need city funds the most.

Turner says the department is also working with colleagues in the planning department and researchers at Rice University to consider which new sites will be best with respect to population trends, equity and public health benefits.

“It’s not a simple issue, but it’s a simple goal,” says Turner.