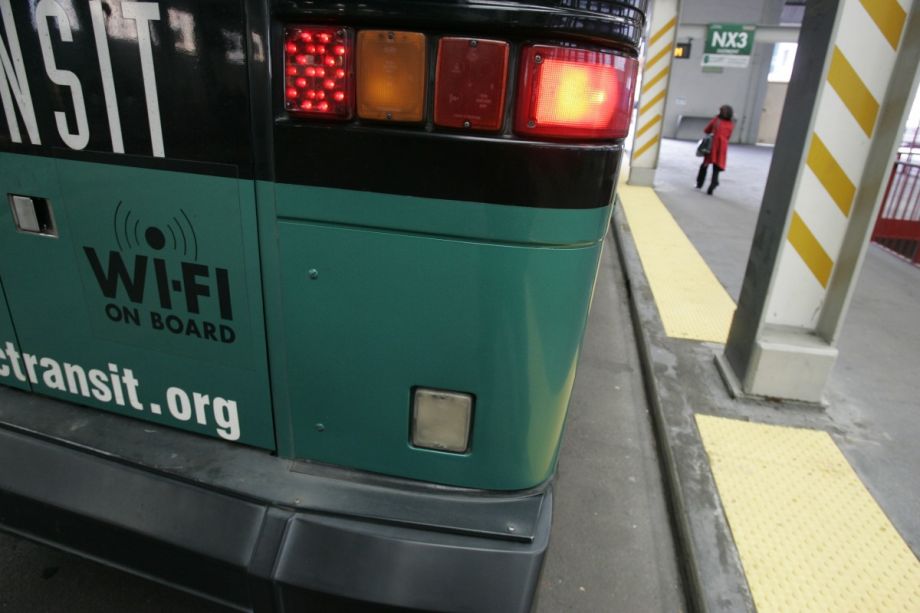 Many transit riders are familiar with onboard WiFi, but as of September, in Porto, Portugal, buses, taxis and even garbage trucks actually act as moving hot spots, supplying Internet access to around 60,000 people each month.

This system, which creator Veniam calls an “Internet of moving things” is a kind of mesh network. Using an onboard device called a NetRider, vehicles communicate with both fixed infrastructure and other vehicles. The startup’s website depicts the widely distributed signals as a vast, city-wide spiderweb, with anyone in range able to log on.

This month, Veniam announced that it had secured $4.9 million in funding, and the Portuguese company definitely has plans for the U.S. Venture Beat reports that Veniam will initially focus on bringing its service to San Francisco, New York City and Austin. (João Barros, one of the company’s founders, wouldn’t confirm those picks.)

“We aim to turn every vehicle into a WiFi hotspot,” says Barros. (Other company founders include Susana Sargento, Roy Russell and Robin Chase of Zipcar.)

According to Barros, one of the system’s biggest upsides is cost. The small, widely distributed boxes are far cheaper for cities to install than more centralized cellular infrastructure. As an article in Government Technology explained earlier this month, it’s a difference of about 85 cents to $15 per gigabyte.

“Veniam’s potential savings may be a big draw for developing nations, highly dependent on mobile Internet access, yet unable to pay for cellular infrastructure — such as cellular towers in overly congested locales,” Jason Shueh wrote.

And because all those synced up vehicles are equipped with sensors, they’re able to collect a vast amount of data. This, of course, is the promise of the so-called Internet of Things, or “IoT,” a buzzy phrase that writers for the Pew Research Internet Project define simply as the “expanding networking of everything and everyone.” But while some see its massive potential for smart, efficiently run city systems, others worry about big-time privacy violations.

Starting with the positives, a paper released by Cisco last year outlined some fascinating uses for Big (City) Data.

“[O]pportunities are likely to cover things such as improved building management, more efficient traffic flow, clever ways to provision basic services (for example, “street lighting as a service,” which can be managed and consumed to reflect more accurately changing patterns of need and demand), water or waste management, and policing,” the industry report states. One particularly interesting use it highlights are sensors in parking spots that gather real-time information on garages and meters. That data could be relayed to parkers via an app, unsnarling massive backups from cars circling the block.

And, indeed, Barros outlines a host of ways municipalities could use Veniam’s system. Sensors on buses can collect data on emissions and the surrounding air quality. Garbage trucks can gather information on how full cans and bins are, adjusting their routes to leave out half-full or empty containers. Vehicles can upload information on pavement qualities and speed.

“It could help you make much better decisions about where to place bus lanes or how to time traffic lights,” he says.

But for all its potential, privacy is an oft-voiced concern among IoT skeptics. As the Pew Research project detailed, big data overreach weighed heavily on the minds of more than 1,600 experts canvassed last May.

One law professor wrote that a “workplace plugged into the Internet of Things will be more productive and more prison-like.”

Of course, having your garbage collected less frequently or monitoring the air quality around your bus hardly seems like Orwellian surveillance. Many skeptics of the IoT voice more concern about apps that monitor your vital signs, not apps that provide more efficient parking.

The company’s website also addresses the risks of a potential hack, stating that products don’t interact with vehicle controls systems. In other words, external entities can’t co-opt your bus and create a remotely operated version of Speed.

Whatever the risks and rewards, the company recently opened an office in Mountain View, California. Barros says city contracts are in negotiation and won’t name any specifics yet, but in 2015, the Internet of Moving Things could be coming to a bus, taxi or garbage fleet near you.