How Cities Can Harness the Flood-Fighting Powers of Urban Parks 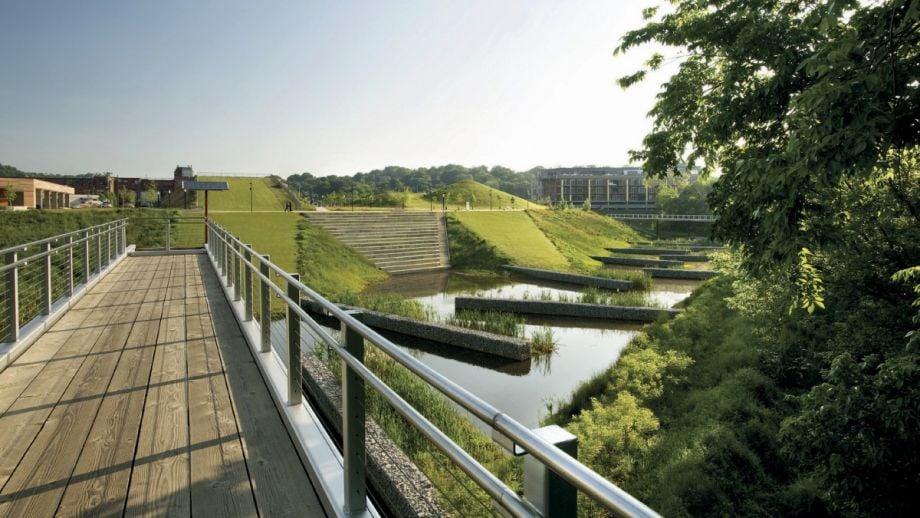 Now, in partnership with the American Planning Association and the Low Impact Development Center, NRPA has released a more technical guide outlining the nuts and bolts (or rather, constructed wetlands and bioswales) of green stormwater infrastructure, including finer details, like how to engage local communities and, yes, secure funding. Taken with NRPA’s other 2017 releases, it reads as a call-to-arms for parks agencies that want to take on the wet, hot and increasingly unpredictable problems of a warming world in their own backyards, one flood management strategy at a time.

The guide starts, more or less, with a glossary of those potential strategies: bioretention, green roofs, permeable pavements, land conservation, vegetation management. From there, it goes into which park features are most conducive to the various tactics — parking areas are generally best suited for permeable pavers and bioswales, trails are a great place for bioretention practices like rain gardens.

And then, of course, there’s the money question. Parks can “leverage the co-benefits” provided by green stormwater projects as they update their systems to comply with municipal permits and federal regulations. The guide suggests partnerships between parks agencies and water utilities, EPA resources and teaming up with departments of housing and economic development to spur revitalization in underserved areas.

One thing it could have done better is detail how to serve those long-neglected areas without becoming a force for displacement. The guide mentions green gentrification as a necessary consideration — and suggests involving “partners such as the local Housing Authority to take necessary measures to maintain the community” — but doesn’t delve as deeply as it could into the thorny and complex issue.

Still, it’s certainly timely, given Hurricanes Irma and Harvey — coupled with an uneven federal agenda that is, at best, lukewarm toward climate and resilience efforts and, at worst, openly hostile toward them.

“Parks are a smart and effective solution to many of the challenges associated with a changing climate,” Lori Robertson, NRPA director of conservation, said in a release. “Our hope is more communities will discover these benefits through the use of this guide, and the implementation of green stormwater infrastructure projects in parks across the country.”