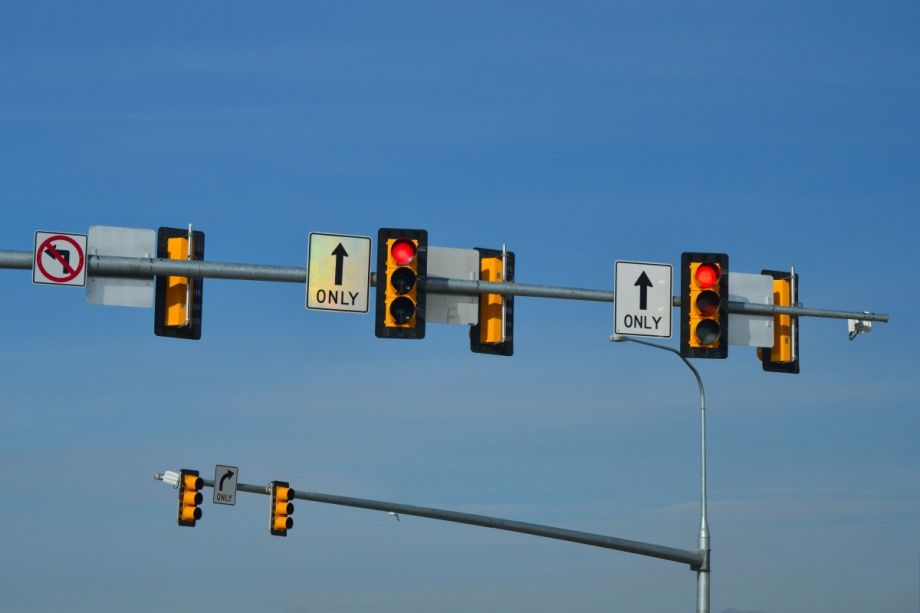 The promise of “smart city” solutions is so trendy and so all-encompassing — with cities pursuing tech-enabled optimization on such a wide range of issues — it can be easy to forget that it all started with the lowly traffic signal. Los Angeles installed the first adaptive signal timing system back in 1984, with the goal of managing traffic flow during that year’s Olympics. Today’s systems are more sophisticated, and a whole slate of new technologies exists to adjust traffic lights based not just on vehicle flow, but also on smartphone data and the movement of pedestrians and cyclists. There’s a distinctly Big Brother feel to this smart cities utopia, and I’ll get to that, but the fact remains that traffic signal optimization has a number of benefits. It reduces congestion, which cuts down on idling, which is good for the environment. Installing sensors on buses allows for traffic systems that prioritize transit, making the mode faster than driving a car.

But while many cities are utilizing adaptive signal timing on at least some traffic lights, they’re not always making the most of their data, says Erin Skimson, a director of marketing at Canadian transportation data company Miovision. Last week the company released a survey intended to help cities benchmark their progress and figure out where to start in updating their systems. “When you look at the traffic signal system, you say jeez, there’s an awful lot of information and data coming through there,” says Skimson. “How do we use that infrastructure more efficiently? We can’t build our way out of these congestion issues.”

One way to best utilize that data is to allow it to serve more than one purpose, a goal that Atlanta is pursuing as part of its Smart City partnership with AT&T.

“Our whole vision is that one sensor collects all the data it can and then all of the departments that could benefit from that data have access to it in real time,” says Kirk Talbott, Atlanta’s chief information officer. He’s working with the department of transportation to explore a number of traffic optimization tools, including tracking vehicles on a lane-to-lane basis, which can both inform signal patterns in real time and be abstracted to ferret out larger trends. If 3,000 cars normally use a specific corridor at 3 p.m. on Mondays, Talbott offers as an example, and the signals are normally timed to accommodate that, a smart system could adapt appropriately if 1,000 or 5,000 people are driving on the corridor instead.

Pedestrian tracking technology plays a similar role for those on foot or on bike, and this is where the whole premise gets a little dystopian. Talbott suggests pedestrian tracking could not only be used to trigger and time crosswalk lights, but could also alert public safety officials if an unusual number of people are gathering.

Atlanta has not installed the technology, and is still looking into other tools, like new ways to improve signal adaptability and timing. Talbott took the Miovision traffic signal survey to benchmark how the city is progressing compared to others, and to help identify blind spots in its approach. “It was a deeper dive into traffic management, which was useful,” he says, “and it did prompt some questions about areas we need to look into.”

Skimson says the survey was originally intended for city engineers since many of the questions are quite technical, but that it’s become clear that it can be a useful tool for other city staff, like Talbott and his IT department. “IT hasn’t necessarily been a key stakeholder for transportation departments in the past,” she says. “As you look forward, looking at integrating data as a more essential part of the management tool, suddenly you’ve got to be integrating other departments of the city.”

Skimson walked me through the survey, which attempts to get a picture of a city’s existing smart signaling landscape.

First, planners aim for about 1,000 people per traffic signal so we planned for a “city” with 100 traffic lights, and about 100,000 people. Half of the lights in our fictional city were connected, because respondents to a previous Miovision survey said 48 percent of their traffic lights were. Then, from a list of reasons for a lack of connection (81 percent of respondents said they wanted their traffic signals connected), we chose budget, lack of traffic data and government policy. Skimson says the latter in particular is a growing issue. With technology evolving as quickly as it is, and government procurement moving as slowly as it does, the tech solutions a city department proposes today could be antiquated when it can finally be implemented two years later.

Systemwide connectivity and inadequate data are also core challenges. A city may utilize technology to adapt signaling in real time, but that technology doesn’t necessary report back other data — like whether a signal is even working. Skimson says without that, city departments may be stuck waiting until a citizen calls to complain that a traffic light is on flash, or need to send staff driving around to check them visually. That could be fixed by overlaying the existing infrastructure with new sensors or other communication tools, she says.

First though, cities need to know where they’re at. The survey also asks whether cities have a plan, and how recently it’s been updated. If they don’t have one, or have one more than five years old, the survey is likely to say: Go make a new one. It also asks respondents to check off which technologies they already have, and which technologies they are exploring or would like to have. There are systems that change lights based on sensors embedded in the streets, sensors that indicate when a car is approaching an intersection, dynamic messaging signs that alert drivers how long the journey will take from point A to point B, transit priority sensors that turn lights faster for buses and other public transit, systems that will allow automated vehicles to communicate directly with infrastructure and each other. There’s a system that captures cell phones’ Bluetooth and Wi-Fi data to determine how long it’s taking for a car to move from one intersection to another. For our fictional city, Skimson and I put down that we don’t have it, but we’re evaluating.

We got a score in the yellow range, meaning our city was off to a good start, but could use improvement. We needed to improve our plan, up the tech, up the measurement and share more data. Though Miovision stands to profit off the smart city movement, of course, Skimson says the company hopes good ideas will come from everywhere. “City services don’t exist in bubbles,” says Skimson. “You’ve got awfully smart citizens who might come up with innovations you never even thought of.”

Talbott in Atlanta says just taking the survey made him aware of the range of possibilities out there. Despite all the hype, he says the market for smart city tech isn’t all that well-developed. Companies offer products to deal with specific issues, but he has yet to find the tools he needs to create a complete, shared data landscape, like ways for citizens to interact with the mass of data being collected for and from them, and which cities keep promising will benefit their lives.

“It’s not a mature market, and therefore there’s definitely some gaps in terms of things we would like to see but the market hasn’t invented them yet,” says Talbott. “What’s the urban interface to the smart city revolution?”